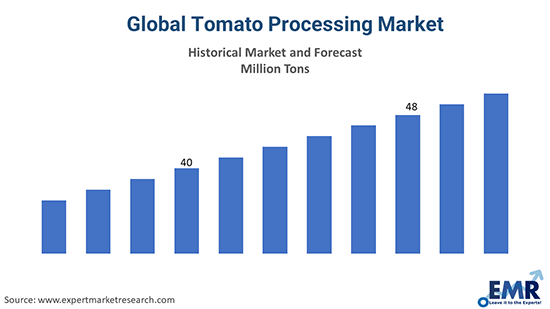 The global tomato processing market is also aided by the increasing production of tomatoes, globally. In 2020, their global production attained a volume of 186 million tons. Their production is projected to grow at a CAGR of 3.2% between 2022-2027 to reach 223 million tons in 2026.

The Asia Pacific is the largest producer of tomatoes accounting for over half their global production. Middle East and Africa followed Asia Pacific as their leading producer. The United States, on the other hand, is the largest tomato processing country with a global market share of over 35%. In 2017, tomatoes represented 70% of the total processing vegetables in the United States with 22, 011.7 million pounds selected for processing. They were also the leading crops in the United States in terms of processing-vegetable farm value, being worth USD 912 million in 2017.  Italy and China were also significant markets in the industry along with Turkey and Iran.

The imports of processed tomatoes from Ukraine to the EU saw a significant increase of 17% in 2017, as compared to 2016, due to be a competitive market, and due to a sharp decrease in imports from China. The Ukraine exports to the European Union of processed tomatoes will continue growing, rising by 15% in 2018, from 2017. European Union imports of fresh tomatoes saw an 8% increase supported by the 42% growth in imports from Turkey in 2017, as compared to the previous year. 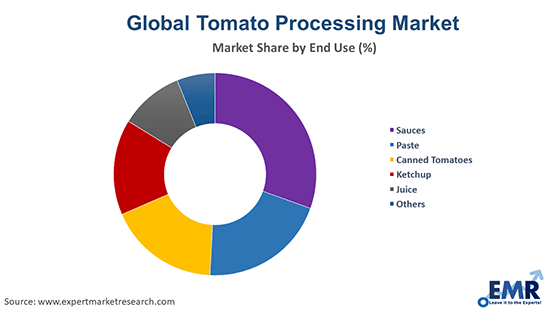 Tomatoes, initially consumed by Mexicans, spread across the globe due to the colonisation of the Americas by the Spanish. Their processing started in 1847 with manual canning. Today, tomato processing is highly organised and generates sales worth billions of dollars.

Based on distribution channels, the market can be divided into:

The EMR report analyses the regional markets like North America, Latin America, the Middle East and Africa, Europe, and the Asia Pacific. 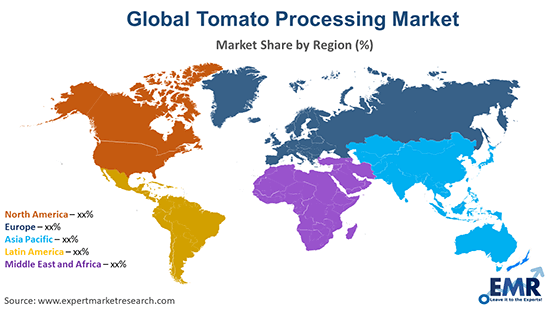 Only around one-fifth of the tomatoes produced globally are processed with the majority of them being consumed fresh. Processed tomatoes find their maximum application in sauces, which accounts for nearly 30% of their total global application. In 2018, about 12 million tons of sauces were consumed globally. Pastes are another application segment that dominated the market.

The global tomato processing market is being driven by the extensive applications of processed tomatoes in sectors like household, food processing, and snack foods. They are also used widely in the foodservice industry in hotels, restaurants, and fast food retail chains. With the fast food industry thriving globally, the market is being propelled forward. The growing organised retail sector is also providing further impetus to the market growth. The additional health benefits of processed tomatoes along with their longer shelf life is driving their demand. Tomato puree is an especially significant processed product as it finds expansive use across various value-added products like tomato juice, ketchup, paste, strained tomato pulp, pickles, pasta, pizza sauces, salsa, gravies, ready-to-eat curries, and tomato-based powder products.

The global production of processed tomatoes saw a decrease in 2018 with key markets like China experiencing a sharp decline in production. However, markets like California were still thriving with a 13% increase in 2018, as compared to the previous year. In the European Union, with Europe accounting for 11% of the global tomato production, their production for processing increased by 6% in 2017, as compared to 2016. Around 11.5 million tons of the vegetable were processed in 2017 in the EU.

The report gives a detailed analysis of the following key players in the global tomato processing market, covering their competitive landscape, capacity, and latest developments like mergers, acquisitions, and investments, expansions of capacity, and plant turnarounds:

What was the global tomato processing market size in 2020?

The consumption volume of processed tomatoes reached around 42 million tons in 2020.

The consumption is estimated to reach a volume of about 51 million tons by 2026.

What are the key industry trends of global tomato processing market?

The health benefits of processed tomatoes combined with their longer shelf life is expected to be a key trend guiding the growth of the industry.

North America, Europe, the Asia Pacific, Latin America, and the Middle East and Africa are the leading regions in the global tomato processing market.

The leading distribution channels in the market are supermarkets and hypermarkets, convenience stores, specialty stores, and online stores, among others.

The sauce sector accounts for the largest market share, among other end-use segments in the industry.

The global tomato processing market is aided by the rising production and consumption of processed tomatoes. In 2020, 42 million tons of processed tomatoes were consumed globally. Their consumption is likely to grow at a CAGR of 3.8% in the forecast period of 2022-2027 to attain 51 million tons in 2026. The global tomato processing market is also being driven by the increasing production of tomatoes, globally. In 2020, their global production attained a volume of 186 million tons. Their production is projected to grow at a CAGR of 3.2% between 2022-2027 to reach 223 million tons in 2026.

EMR’s meticulous research methodology delves deep into the industry, covering the macro and micro aspects of the industry. Based on its end-use, the global tomato processing market processing can be segmented into sauces, paste, canned tomatoes, ketchup, and juice, with sauce accounting for the largest market share. On the basis of distribution channels, the market is divided into supermarkets and hypermarkets, convenience stores, specialty stores, and online stores, among others. The major regional markets for tomato processing are North America, Europe, the Asia Pacific, Latin America, and the Middle East and Africa. The key players in the global tomato processing market include Campbell Soup Company, J.G. Boswell Tomato Company, Chumak Company, Morning Star Company, and CONESA Group, among others.