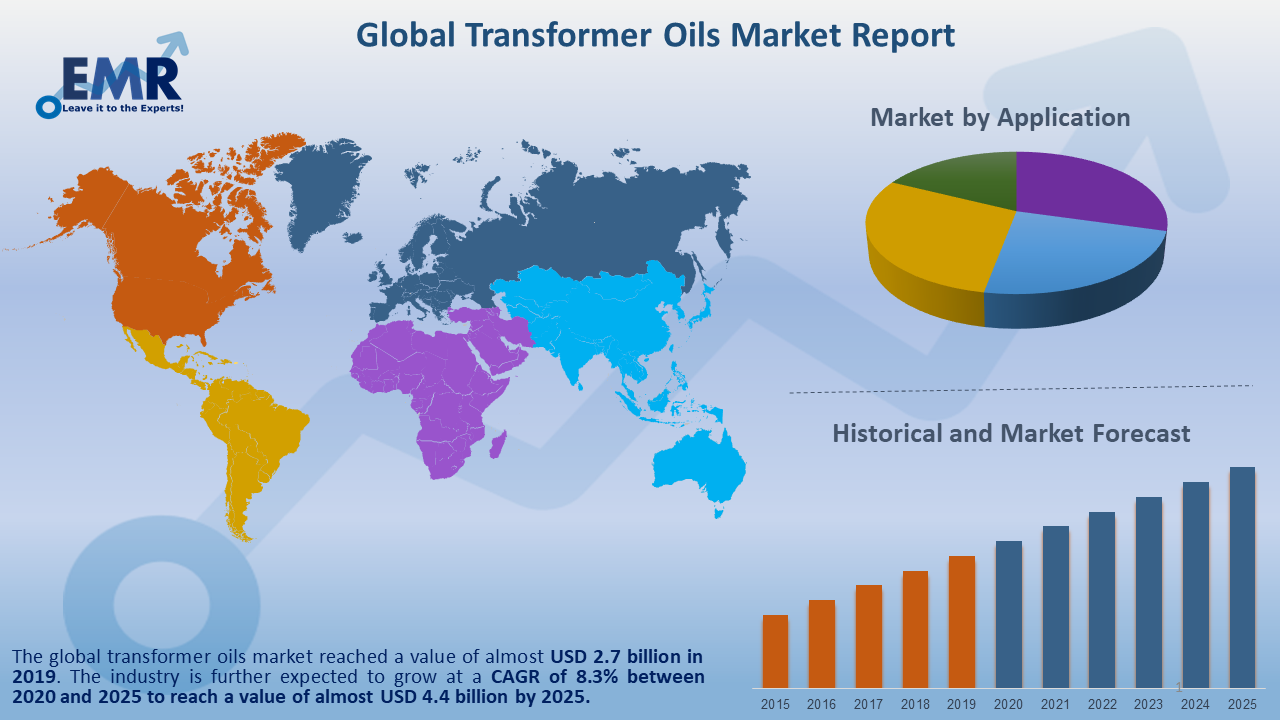 The Asia Pacific, Africa, and the Middle East are among the mature regional markets for transformer oils. The growth of transformer oil is estimated to become higher in the maturing markets due to the rising demand for new transformers. Developing countries such as Brazil, India, and China have an increasing population and are focusing on building better infrastructure, which is bolstering the market growth of transformer oils. The market is being driven by the increase in the global energy industry, which in turn has increased the investments in the transformer industry. The governments are encouraging the replacement of old transformers with technologically advanced new power transformers to improve energy efficiency and reduce losses. This is leading to the modernization of the power grids in countries such as India, China, Germany, and the United Kingdom.

Transformer oil, also known as insulating oil, is an oil that remains stable at high temperatures and has superior electrical insulation properties. It is used in fluorescent lamp ballasts, oil-filled transformers, and in some types of high-voltage capacitors, high-voltage switches, and circuit breakers. It is available in the following types:

Transformer oil finds its application in:

The market is segmented on the basis of end-use into:

The increase in the growth of the power industry and the rising demand from its Transmission and Demand (T&D) sector is driving the market growth of transformer oils. The increasing demand for oil-filled transformers due to increasing electrification, increasing energy demand, and increased industrial usage in developing economies are expected to contribute significantly towards the growth of the industry. The Asia Pacific region is estimated to become the leading global transformer oil market in the upcoming decade as a consequence of the growing need for the advancement of the rural and urban infrastructure.

The prices for crude oil have improved from the past period of 2014-2015 and is expected to trend upwards in the forecast period. The transformer oils market, thus, is also expected to witness an increase in price in the coming years.

May 2017- Calumet Specialty Products Partners, L.P. (NASDAQ: CLMT) announced the launch of CALTRAN 60-00 Group U, an uninhibited and naphthenic transformer oil that has been engineered specifically by the company's own product development group to align with the International Standard IEC 60296, ed. 4, 2012 General Specifications. The uninhibited transformer oil has no additive content, and it provides high-quality protection for electrical equipment.

The report gives a detailed analysis of the following key players in the global transformer oils market, covering their competitive landscape, capacity, and latest developments like mergers, acquisitions, and investments, expansions of capacity, and plant turnarounds:

The global transformer oils market attained a value of almost USD 2.7 billion in 2019. It is expected to witness a further growth in the forecast period of 2020-2025, growing at a CAGR of 8.3%. The market is projected to reach nearly USD 4.4 billion by 2025.

EMR’s meticulous research methodology delves deep into the market, covering the macro and micro aspects of the industry. Based on types, the transformer oil market can be segmented into mineral based oil, silicone-based oil, and bio-based oil. On the basis of application, the product finds its applications in power transformers, distribution transformers, and utilities, among others. The market can be also divided into OEM and electrical utility companies, among others, on the basis of end-uses. Regionally, the market can be divided into North America, Latin America, Europe, the Asia Pacific, and the Middle East and Africa, with the Asia Pacific accounting for the largest market share. The key players in the above industry are Nynas AB, Ergon Inc.,    APAR Industries Ltd, Calumet Specialty Products Partners, L.P., Sinopec Corp., San Joaquin Refining Co. Inc., Hydrodec Group Plc, Petro-Canada Lubricants Inc., and Cargill Inc., among others.

The major drivers of the industry such as rising disposable incomes, increasing population, rising urbanisation, increasing energy demand, rising demand from its Transmission and Demand (T&D) sector, increasing electrification, and growing industrial usage are driving the growth of the market globally. EMR’s research methodology uses a combination of cutting-edge analytical tools and the expertise of their highly accomplished team, thus, providing their customers with industry insights that are accurate, actionable, and help them remain ahead of their competition.

Industrial gases are produced for industrial use. Nitrogen, oxygen, carbon dioxide, argon, hydrogen, helium, and acetylene are the primary gases, even though many other gases and variations are found ...

The global drilling fluids market is driven by the growing number of drilling operations and recovering oil prices. In the Asia Pacific, India and Australia have witnessed continued performance of dri...

The industry is witnessing a boost owing to the growing emphasis by governments of both developed as well as emerging nations on the production of clean, renewable, and efficient energy. Several techn...