Global Trisodium Phosphate Market to Grow at a Healthy Pace During 2021-2026, Aided by the Growing Demand for Food Additives 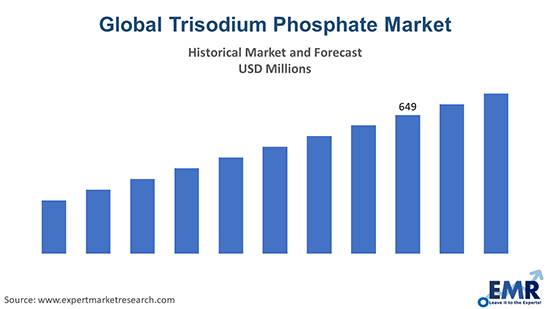 The Asia Pacific is expected to provide enhanced opportunities for the growth of the trisodium phosphate industry in the forecast period. The growing urbanisation and industrialisation and the rising demand for processed food products in developing countries, particularly India and China, are driving the industry growth in the Asia Pacific. On the other hand, North America and Europe are witnessing reduced utilisation of trisodium phosphate for detergent applications. This can be attributed to the growing environmental concern and the implementation of stringent government regulations, leading to a shift in market dynamics and a rise in demand for food grade trisodium phosphate in the regions.

Trisodium phosphate, often abbreviated as TSP, is an inorganic compound represented by the formula Na3PO4. In appearance, it is a white granular or crystalline solid. It readily dissolves in water to create an alkaline solution. It can be obtained via the neutralisation of phosphoric acid with sodium carbonate, leading to the formation of disodium hydrogen phosphate, which is further reacted with sodium hydroxide to produce trisodium phosphate. It has various applications, ranging from cleaning agent to food additive and degreaser. 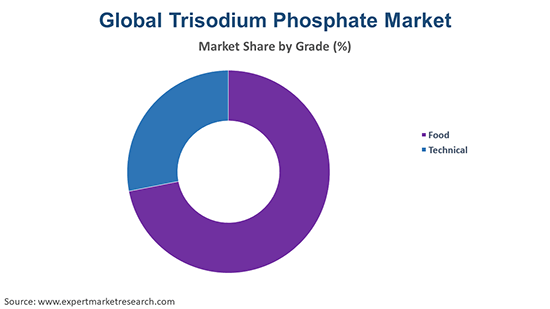 Based on grade, the market is bifurcated into: 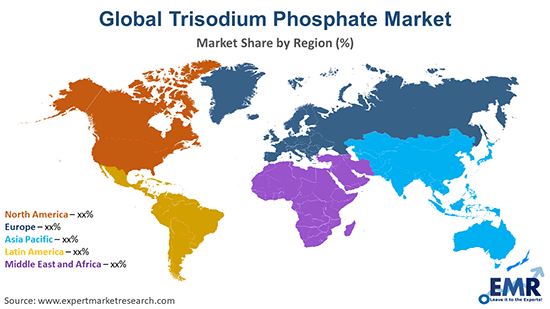 The thriving food industry and the increasing consumption of processed food products are driving the demand for food additives, which, in turn, is contributing to the growth of the trisodium phosphate industry. Within the food industry, trisodium phosphate is mainly utilised for processed cheese products and cereals. The market is being supported by the escalating disposable incomes and the advancements in the food processing sector. Further, the growing demand for detergents and industrial cleaners are also contributing to the industry growth. However, the use of trisodium phosphate is likely to decline in developed regions owing to the stringent environmental regulations. Although, the regions where there are no regulations on its usage will significantly drive the demand for the product in applications like detergents and cleaning products.

The report gives a detailed analysis of the following key players in the global trisodium phosphate market, covering their competitive landscape, capacity, and latest developments like mergers, acquisitions, and investments, expansions of capacity, and plant turnarounds:

What is the growth rate of the global trisodium phosphate market?

The major drivers of the industry, such as the rapid industrialisation and urbanisation, growing demand for detergents and cleaning products, rising disposable incomes, growing consumption of processed foods, and rising demand from the developing regions, are expected to aid the market growth.

What are the key industry trends of the global trisodium phosphate market?

The key market trends guiding the growth of the industry include the advancements in the food processing sector.

What are the major regional markets of trisodium phosphate, according to the EMR report?

What are the leading grades of trisodium phosphate in the market?

The leading grades of trisodium phosphate in the market are food and technical.

The major application segments in the industry are food additive, detergents and cleaners, metal treatment, and water softener, among others.

EMR’s meticulous research methodology delves deep into the market, covering the macro and micro aspects of the industry. By grade, the market is divided into food and technical. Based on application, the industry is segmented into food additive, detergents and cleaners, metal treatment, and water softener, among others. The major regional markets for trisodium phosphate are North America, Europe, the Asia Pacific, Latin America, and the Middle East and Africa. The key players in the above market include Recochem Inc., Jiangsu Kolod Food Ingredients Co., Ltd., FBC Industries, Inc., Aarti Phosphates, and Hefei TNJ Chemical Industry Co.,Ltd., among others.