The United States HIV drugs industry is driven by the North America HIV drugs market, which reached more than USD 10 billion in 2020.

United States and many other countries in other regions witness large number of cases of HIV infection. Unites States noted a major spike in the number of new cases according to most recent data, with the southern states taking the highest numbers among all. It was followed by the West, North-East and Midwest parts of the United States. The demand for drugs for the same will be greater to cater to new and existing cases collectively. More testing centers will also help in early detection of HIV positives and, accordingly, people can start with prescribed medicines to protect themselves from very serious harm. Innovation will also help in rising in the market, like creating more multidimensional medicines such that the burden of consuming different pills is minimized, or lesser dosage is required in a particular time.

HIV, human immunodeficiency virus, infection is a condition which attacks and weakens the immune system of people. There are three stages of the infection, acute, chronic and the final and most severe acquired immunodeficiency disease (AIDS). HIV medicines can help in viral suppression, by decreasing the viral load which can protect the immune system and prevent transmission too. Some medicines do this by blocking or altering the enzymes that help the virus multiply. Some refrain the virus from decreasing the CD4 cell count, which fight the pathogens or infections. 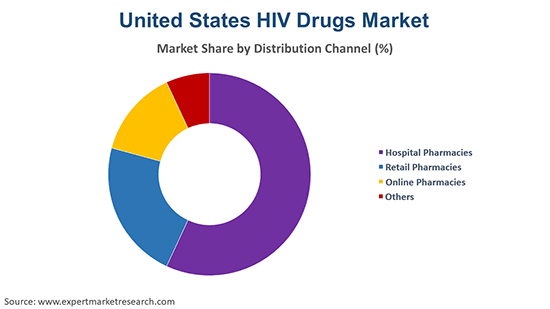 Based on the types of HIV drugs, the market is divided into:

The different classes of HIV drugs are:

The route of administration of the drugs in the include:

Different distribution channels are divided into: 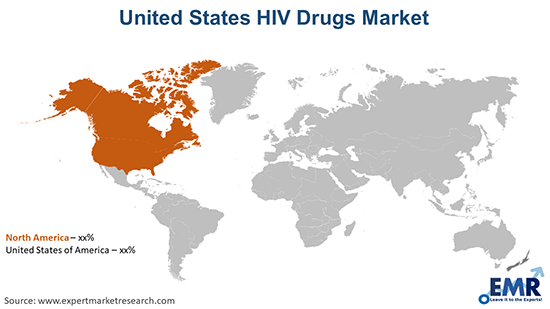 The rising density of HIV-infected people in the population has helped in the production and implementation of HIV drugs. The market is affected by rising government initiatives and campaigns to raise public consciousness about the causes, symptoms, and treatments of HIV. Furthermore, the launch of generic drugs, which are less expensive and chemically similar to branded drugs, is another factor adding to the demand for HIV drugs. Several international organizations provide funds to research institutes for R&D activities in order to develop innovative, accessible, secure, and reliable medicines for successful therapeutic solutions. The aforementioned factors are expected to drive up demand for HIV drugs over the forecast period.

The report presents a detailed analysis of the following key players in the HIV drugs market of United States, looking into their capacity, market shares, and latest developments like capacity expansions, plant turnarounds, and mergers and acquisitions:

The major drivers of the industry include rising population, growing disposable incomes, demand for prevention of infection, and the rising availability of affordable and innovative drugs.

The increasing government initiatives and campaigns to raise public consciousness awareness about the disease is an important industry trend.

What are the major product types of the market?

What are the classes of the product in the market?

Which are the different forms of drugs in the market?

Oral and topical forms of drug are available.

What are the distribution channels of HIV drugs?

The United States HIV drugs market is driven by the North America HIV drugs market, which attained more than USD 10 billion in 2020, driven by the efforts to prevent and suppress the virus count in HIV positive people. Aided by the medical advancements, the market is expected to witness a further growth in the forecast period of 2022-2027.

The global oral antibiotics market attained a value of over USD 18,365.8 million in 2021, driven by the extensive use of oral antibiotics for the treatment of infectious diseases. Aided by the growing...
Read More

The Asia Pacific vaccine market attained a value of nearly USD 3.92 billion in 2021, driven by the robust growth of the healthcare sector. Aided by the increasing research and development (R&D) activi...
Read More

The global microencapsulation market attained a value of about USD 9.52 billion in 2021, driven by the advancements in the pharmaceutical and nutraceutical industries. Aided by growing inclination tow...
Read More

The global anti-infectives market attained a value of about USD 118.36 billion in 2021, driven by the rising prevalence of infectious diseases. Aided by large scale investments into the pharmaceutical...
Read More

The global liposomal doxorubicin market attained a value of more than USD 1,100 million in 2021, driven by the increase in breast and ovarian cancer cases, as well as increased awareness of the advant...
Read More