Global Vinyl Acetate Market to Grow at a CAGR of 4% During 2021-2026, Aided by the Expansion of the Major Downstream Markets

The global vinyl acetate market is expected to grow at a CAGR of 4% in the forecast period of 2023-2028. 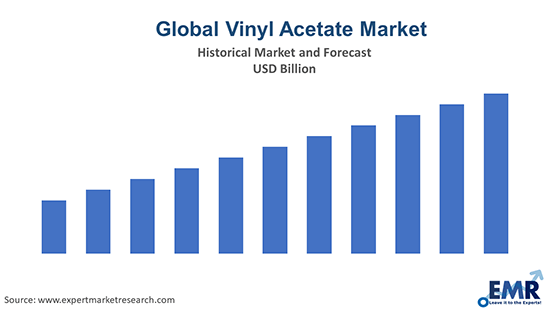 The Asia Pacific to Dominate the Global Market for Vinyl Acetate

The global market for vinyl acetate is dominated by the Asia Pacific region. The demand is growing in the region due to the rapid urbanisation and industrialisation as well as the growing construction activities in the region. With the growing construction activities, the production capacity of paints and coatings, and adhesives are also growing, wherein vinyl acetate is mainly utilised, thus, aiding the industry growth. The developed regions like North America and Europe will significantly contribute to the industry growth over the forecast period owing to the growing adoption of renewable energy sources like solar panels. 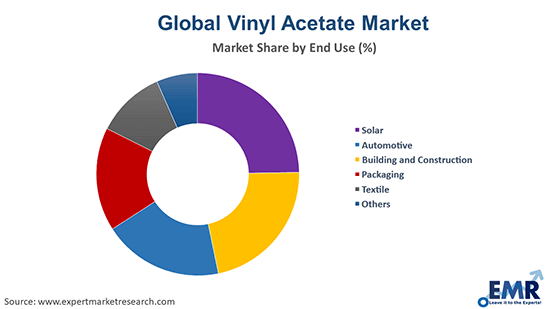 Vinyl acetate (VAM), an organic compound, is represented by the formula C4H6O2. It is a precursor to polyvinyl acetate, which serves as a significant industrial polymer. It is used as a major ingredient in furniture glue. Commercially, it is prepared via the reaction of ethylene, acetic acid, and oxygen in the presence of a palladium catalyst.

Based on manufacturing process, the market is divided into:

The major applications of vinyl acetate include: 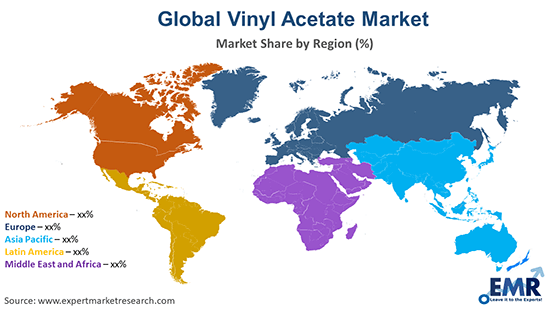 The increase in demand for adhesives in food packaging applications and the growing adoption of solar power generation are driving the growth of the market. The solar power industry is witnessing a rapid growth across the world owing to the growing environmental concern and rising demand for renewable energy sources. Further, the thriving construction sector, growing demand for automotive and furniture as well as paints and coatings are the major drivers of vinyl acetate industry. In emerging economies such as India and China, there has been a rise in consumer disposable incomes that is further aiding the demand for automobiles. This, in turn, is augmenting the demand for ethylene vinyl acetate (EVA) resins, which are widely used in the production of automobile bumpers and moulded parts. The rapid technological advancements and increasing R&D activities are expected to have a positive effect on the expansion of the global vinyl acetate industry. For instance, the introduction of bio-based ethylene vinyl acetate materials will provide lucrative opportunities for the expansion of the industry in the coming years.

The report gives a detailed analysis of the following key players in the global vinyl acetate market, covering their competitive landscape, capacity, and latest developments like mergers, acquisitions, and investments, expansions of capacity, and plant turnarounds:

What is the growth rate of the global vinyl acetate market?

What are the key industry trends of the global vinyl acetate market?

The key trends guiding the growth of the market include the rising adoption of renewable energy and the introduction of bio-based ethylene vinyl acetate materials.

What are the major regional markets of vinyl acetate, according to the EMR report?

What are the major manufacturing processes in the market?

The major manufacturing processes in the market are ethylene process and acetylene process, among others.

The significant end-use sectors in the industry are solar, automotive, building and construction, packaging, and textile, among others.

The global vinyl acetate market is being driven by the rising adoption of renewable energy sources. Aided by rapid technological advancements, the market is expected to witness a moderate growth in the forecast period of 2023-2028, growing at a CAGR of 4%.

EMR’s meticulous research methodology delves deep into the market, covering the macro and micro aspects of the industry. By manufacturing process, the market is segmented into ethylene process and acetylene process, among others. Based on application, the industry is divided into polyvinyl acetate, polyvinyl alcohol, ethylene vinyl acetate (EVA), and ethylene-vinyl alcohol (EVOH), among others. On the basis of end use, the market is categorised into solar, automotive, building and construction, packaging, and textile, among others. The major regional markets for vinyl acetate are North America, Europe, the Asia Pacific, Latin America, and the Middle East and Africa, with the Asia Pacific accounting for the largest share of the market. The key players in the above market include Celanese Corporation, Clariant Ltd., Exxon Mobil Corporation, China Petrochemical Corporation, and Dairen Chemical Corporation, among others.