The global volumetric display market is expected to grow in the forecast period of 2023-2028 at a CAGR of 35%. 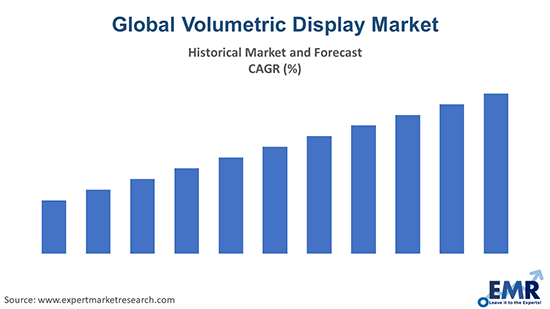 As spending on R&D increases by key players in the industry, volumetric displays are becoming increasingly capable and accessible with technologies such as digital light processing and liquid crystal on silicon. Products based on these technologies allow users to view the product from various angles and perspectives without the use of specialised eyewear. They also allow for better and more intuitive control over visuals, including focus on certain aspects of the subject matter. The aforementioned factors are significantly contributing to the growth of the industry.

Developed countries in areas such as North America and Europe are seeing increased spending on military. Thus, the higher allocation for defence budgets is expected to drive the demand for the aerospace and military end uses of the volumetric display industry in these regions.

Volumetric displays are devices used for visual representation. They are characterised by their ability to display objects in three-dimensional view, allowing a more comprehensive understanding and visualisation of the subject matter. Volumetric displays allow for 3D visualisation of objects without the use of 3D glasses or any additional visual aid. 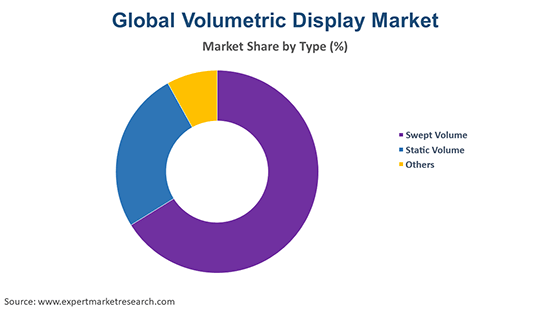 The major types of volumetric displays are:

The market based on technology can be categorised as:

The market can be segmented on the basis of its end uses into:

The EMR report looks into the regional markets of volumetric displays like North America, Europe, the Asia Pacific, Latin America, and the Middle East and Africa. 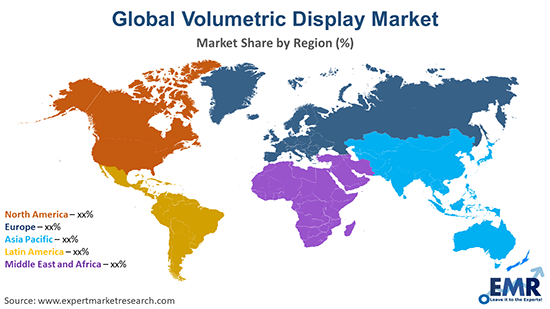 As several iterations of volumetric displays bring numerous improvements, the gulf in capabilities between traditional 3D screens and volumetric displays is widening. These displays allow for 3D imaging of objects in free-space, including real-time control of these objects in high resolution. The displays come with a variety of visual effects for better image representation and allow users to view details in 360o without the use of 3D glasses.

Volumetric displays find end uses in a large number of industries, including academics and education, defence, healthcare, automotive, and gaming. Thus, the market is expected to be driven by the rapid growth of these industries, especially in developing countries.

The report presents a detailed analysis of the following key players in the global volumetric display market, looking into their capacity, market shares, and latest developments like capacity expansions, plant turnarounds, and mergers and acquisitions:

What is the forecast outlook of the global volumetric display market for 2023-2028?

In the forecast period of 2023-2028, the global volumetric display market is expected to grow at a CAGR of 35%.

The major drivers of the industry, such as the rising disposable incomes, rapid innovation and technological advancements, increased spending on military and defence budgets, high adoption in education, as well as the growth of end use sectors, are expected to aid the market growth.

What are the key industry trends of the global volumetric display market?

The ability of volumetric displays to provide enhanced gaming experiences is expected to boost the growth of the market.

What are the major regional markets of volumetric display, according to the EMR report?

What are the types of volumetric displays in the industry?

The types of the product in the market include swept volume, static volume, and others.

How can the market be broken down based on components?

The market can be broken down based on components as projector, motor and position sensor, mirror, and others.

What are the major technologies involved in volumetric displays?

What are the chief end use segments of volumetric displays?

The market has several end use segments such as academics and education, military and defence, healthcare, aerospace and defence, automotive, gaming and entertainment, and others.

The key industry players of the industry include The Coretec Group Inc., Voxon Photonics, Lightspace Technologies, and Holoxica Ltd, among others.

The global volumetric display market is being driven by innovation and technological advancements. Aided by growth in end use sectors, the market is expected to witness a robust growth in the forecast period of 2023-2028, growing at a CAGR of 35%.

EMR’s meticulous research methodology delves deep into the market, covering the macro and micro aspects of the industry. Based on its types, the market can be segmented into swept volume, static volume, and others. On the basis of components, the market is broken down as projector, motor and position sensor, mirror, and others. The market can also be classified on the basis of technology used as digital light processing (DLP) and liquid crystal on silicon (LCOS). The various end uses of the market include academics and education, military and defence, healthcare, aerospace and defence, automotive, gaming and entertainment, and others. The key players in the above market include The Coretec Group Inc., Voxon Photonics, Lightspace Technologies, and Holoxica Ltd, among others.