The global xylitol market is driven by diverse industrial applications globally. Europe is the leading regional market for xylitol, accounting for the majority of the share. The xylitol market is driven by the increasing health consciousness among the consumers, due to which inclination has been shifted towards natural sweeteners, like xylitol, as it contains 75% fewer carbohydrates and 40% lesser calories in comparison to table sugar.

Xylitol, variously known as wood sugar, is referred to as sugar alcohol with the ability to stimulate the receptors of sweet taste on the tongue. It is derived from fruits and vegetables in small amounts. When consumed, xylitol decreases the levels of bacteria in saliva, which results in tooth decay and fights against some of the bacteria, which causes ear infection. On a commercial level, xylitol can be produced by chemical and biotechnological processes. 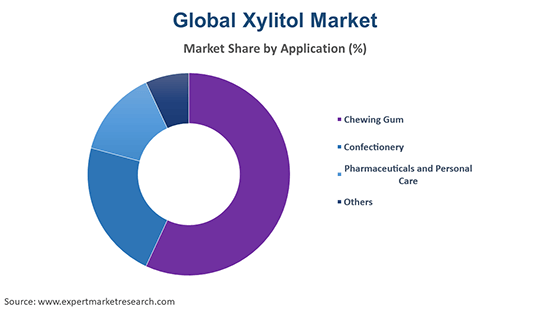 The xylitol market is bifurcated on the basis of form into:

On the basis of application, the xylitol market is segmented into:

Amongst these, chewing gum represents the largest segment within the xylitol market, owing to a robust increase in the demand for sugar-free chewing gums all over the world.

The report also covers the regional markets of xylitol like North America, Europe, the Asia Pacific, Latin America, and the Middle East and Africa. 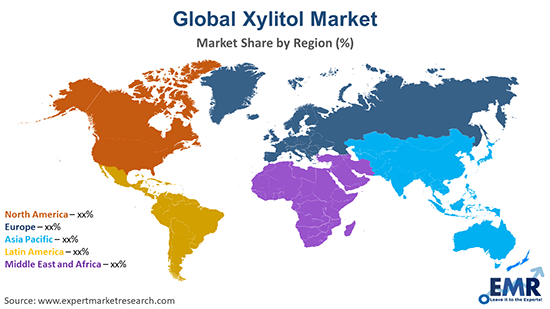 The global xylitol market is driven by the rising concerns among the masses regarding calorie intake due to the growing prevalence rate of various lifestyle diseases, including obesity, high cholesterol, and cardiovascular problems. In addition to this, the growing demand for healthy, economic, and safe sugar alternatives is supporting the growth of the xylitol market. Further, due to the rising health concerns, the consumers are willing to spend more on naturally-based sweeteners instead of regular sugar, further providing impetus to the demand for xylitol across the globe. Other factors contributing to the industry growth include a boost in industrialisation and a shift in consumer preference towards sugar-free products.

The industry is further aided by the extensive utilization of xylitol in pharmaceutical and nutraceutical products as the product helps prevent ear infections, decreases intraocular pressure, heals wounds, and clears nasal passageways. Moreover, xylitol has a low glycaemic index (GI), and it is gradually metabolized in the human body, therefore resulting in negligible changes in the blood sugar. Due to this, xylitol is in high demand from obese and diabetic consumers. Apart from this, the governments of several countries are promoting the use of low-calorie alternatives, such as xylitol, thus resulting in a significant rise in the sales of xylitol.

The report gives a detailed analysis of the following key players in the global xylitol market, covering their competitive landscape, capacity, and latest developments like mergers, acquisitions, and investments, expansions of capacity, and plant turnarounds:

What was the global xylitol market size in 2020?

In 2020, the global xylitol market attained a value of over USD 877 million.

What are the key industry trends of the global xylitol market?

The rising shift towards organic food products and the rising demand for natural sweeteners are the major trends propelling the growth of the industry.

What are the major regions of xylitol according to the market report?

The major regions in the industry are North America, Europe, the Asia Pacific, Latin America, and the Middle East and Africa, with Europe accounting for the largest market share.

The leading types of the product in the industry are solid and liquid.

The chewing gum segment accounts for largest market share among other application segments in the industry.

The key players in the market are Du Pont, Roquette Frères S.A., Cargill, Incorporated, Ingredion Incorporated, and ZuChem, Inc., among others.

The global xylitol market attained a value of USD 877 million in 2020 driven by the rising health consciousness and the growing demand for sugar-free products. Aided by the growing demand for natural sweeteners, the market is expected to witness a further growth in the forecast period of 2023-2028, growing at a CAGR of 5.5%. The market is projected to reach USD 1209.2 million by 2026.

EMR’s meticulous research methodology delves deep into the market, covering the macro and micro aspects of the industry. Based on its types, the global xylitol market can be segmented into solid and liquid. On the basis of application, the chewing gum sector accounts for largest share in the industry. The major regional markets for xylitol are North America, Europe, the Asia Pacific, Latin America, and the Middle East and Africa, with Europe accounting for the largest share of the industry. The key players in the above xylitol market include Du Pont, Roquette Frères S.A., Cargill, Incorporated, Ingredion Incorporated, ZuChem, Inc., and others.