Linear alpha olefins are petrochemicals which are unbranched alkenes with the chemical formula, CxH2x. They are produced majorly by dehydration of alcohols, oligomerization of ethylene or the Fischer-Tropsch synthesis followed by purification. Linear alpha olefins comprise of various important products like 1-butene, 1-octene, 1-hexene, 1-tetradecene, etc. They have terminal double bond at the primary carbon of the chain which increases their reactivity.

Being a versatile organic compound, they are used in a number of industries such as cosmetics and pharmaceuticals, chemical, coatings & paper, automotive and consumer goods. Linear alpha olefins are used in the manufacture of polymers like polyethylene and polyalphaolefin, synthetic lubricants, detergents alcohols, plasticizer alcohol, etc. According to a new report by Expert Market Research, the global linear alpha olefins market reached a volume of 4.88 Million Tons in 2020 and is further expected to reach 6.14 Million Tons by 2026. 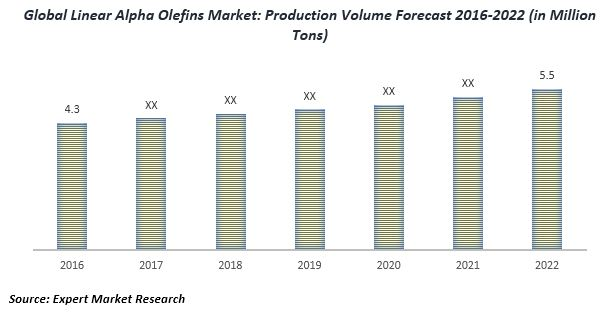 Key findings from the report:

Click here for summary of the report with TOC: https://www.expertmarketresearch.com/reports/linear-alpha-olefin-market

Expert Market Research (EMR) is a leading market research and business intelligence company, ensuring its clients remain at the vanguard of their industries by providing them with exhaustive and actionable market data through its syndicated and custom market reports, covering over 15 major industry domains. The company's expansive and ever-growing database of reports, which are constantly updated, includes reports from industry verticals like chemicals and materials, food and beverages, energy and mining, technology and media, consumer goods, pharmaceuticals, agriculture, and packaging.

EMR leverages its state-of-the-art technological and analytical tools, along with the expertise of its highly skilled team of over a 100 analysts and more than 3000 consultants, to help its clients, ranging from Fortune 1000 companies to small and medium sized enterprises, easily grasp the expansive industry data and help them in formulating market and business strategies, which ensure that they remain ahead of the curve.

The global medium chain triglycerides market is being driven by the growth in the food and beverage industry. Aided by the rapidly growing market for personal care, the industry is expected to witness...
Read More