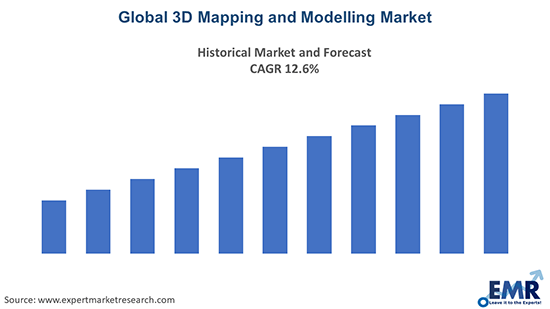 North America is expected to play a major role in the forecast period because the region has a significant automobile market driven by the large presence of key players and technologically advanced capabilities. The improved infrastructural spending brings more money into the economy, creating more demand for services and goods for customers, which will ultimately boost investments in increasing capacity in production facilities, retail stores, and office space. The increasing population trend is also adding to the expansion of the construction industry, particularly in the United States and, therefore, aiding the growth of the 3D mapping and modelling market. The huge volume of connected vehicles in the United States clearly outlines an evolving trend of connected cars, which is aiding the market growth in a proportionate way by increasing the need for better and improved navigation capacities.

3D mapping and 3D modelling can be described as the overall process involving 3D technology visualisation of the objects in the world. 3D mapping requires recording and recreating objects like terrains, buildings, and others in the environment. 3D mapping is primarily used in building planning, navigation, and other applications. 3D modelling is the mathematical development of physical structures with the assistance of specialised software. Such digitally generated 3D models are commonly used in media and entertainment industries, including films, games, and for visual representation for better comprehension. 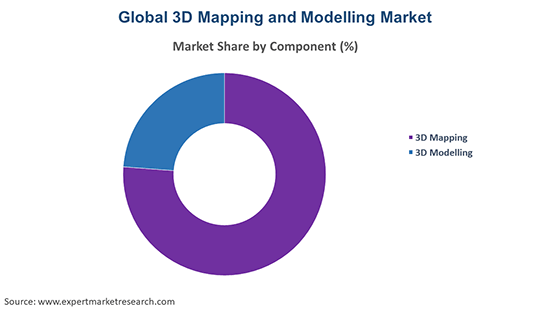 Based on the component, the market is divided into:

The end-uses of 3D mapping and modelling include:

The regional markets for 3D mapping and modelling include North America, Europe, the Asia Pacific, Latin America, and the Middle East and Africa. 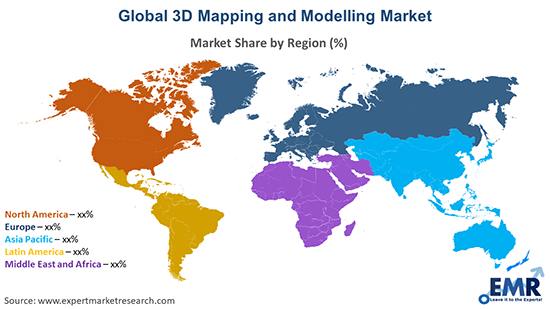 The demand for 3D mapping and modelling solutions has increased in the defence, military, and aerospace sectors. Such systems contribute to developing geospatial intelligence and to improve situational awareness across fields for ongoing tracking and surveillance projects, disaster management operations, and wide-area mapping. The rising demand for driver-less cars, metros, as well as other transport systems has led to the increased adoption of 3D mapping, and, thus, the 3D mapping and modelling industry is also expected to grow. The growth is also being boosted by the thriving demand for customised maps and open-source routing engines for navigation. Other factors for the market growth include the rising demand from the application sector due to the increasing use of 3D animation, games, and movies, and the introduction of 3D enabled display devices.

The 3D mapping and modelling industry is anticipated to be driven by the advancements and easy access to 3D equipment, including sensors, scanners as well as other GPS components. In addition, 3D geospatial data in existing mobile devices and smartphones is likely to boost the market growth in the coming years.

The report gives a detailed analysis of the following key players in the global for 3D mapping and modelling market, covering their market share, capacity, and latest developments like mergers, acquisitions, and investments, expansions of capacity, and plant turnarounds:

What is the growth rate of the global 3D mapping and modelling market?

The market is being driven by the growing demand of the product from the automobile, construction, and defence sectors, the rising infrastructural spending, technological advancements, the rising demand for customised maps, and convenient access to 3D equipment.

What are the key industry trends of the global 3D mapping and modelling market?

In the coming years, the market is expected to be defined by the rising adoption of driver-less cars, metros, and other transport systems, along with the increasing demand for 3d geospatial data in smartphones and other devices.

What are the major regional markets, according to the report?

North America is expected to hold a significant share in the market in the coming years.

The major players in the industry are Vricon, Autodesk Inc., Bentley Systems, Incorporated, Trimble Inc., Intermap Technologies, Inc, and others.

The global 3D mapping and modelling market is projected to be driven by the growing innovations within the market and the increasing demand for geospatial data across application sectors. In the forecast period of 2023-2028, the market is expected to be supported by the development of the automotive, transportation, and construction industries and is projected to grow at a CAGR of 12.6%.

EMR’s meticulous research methodology delves deep into the market, covering the macro and micro aspects of the industry. Based on its components, the market can be segmented into 3D mapping and modelling. On the basis of application, the industry is segmented into projection mapping, texture mapping, and maps and navigation, among others. The end-use sectors in the industry are construction industry, transportation industry, automobile industry, entertainment industry, and healthcare industry. The major regional markets for the product are North America, the Asia Pacific, Europe, Latin America, and the Middle East and Africa, with North America accounting for the largest share of the industry. The key players in the above market include Vricon, Autodesk Inc., Bentley Systems, Incorporated, Trimble Inc., and Intermap Technologies, Inc., among others.