The Asia Pacific is the leading producer of acrylamide monomer and accounts for the largest share of global output of the product. The Asia Pacific region is followed by Europe, North America, Africa, and the Middle East as the other major producers of the material. Germany, United Kingdom, as well as, France are the leading importers of acrylamide monomer globally. China is the leading exporter of the product, followed by Germany, the Netherlands, and the United States. 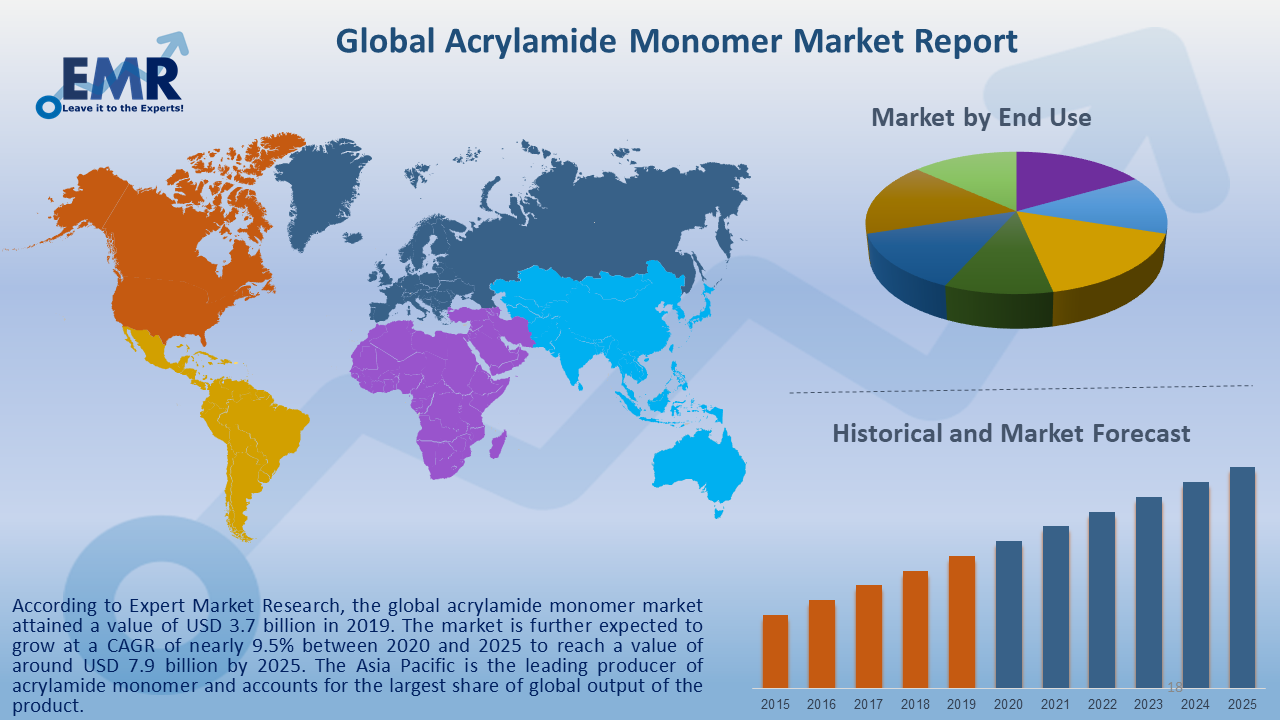 Acrylamide monomer, also known as acrylic amide, is a colourless and odourless chemical. It is highly soluble in water, acetone, and alcohol by the hydration of acrylonitrile. This stays stable at room temperature, and at its melting point, it will polymerize. The thermal decomposition of the monomer of acrylamide expels carbon monoxide, carbon dioxide, and nitrogen oxides.

It finds its end-uses in the following sectors:

The regional acrylamide monomer markets include North America, Europe, the Asia Pacific, Latin America, and the Middle East and Africa.

The increasing use of acrylamide monomers in the end-use sectors, such as gel electrophoresis, ore processing, tertiary oil refining, and the dyes and plastics synthesis is stimulating the demand for the product. One of the key drivers of the market growth is the use of acrylamide monomer in polyacrylamide synthesis, which is further used in the treatment of wastewater. As the developed countries concentrate on the use of polyacrylamide in wastewater treatment, the acrylamide monomer market will be propelled forward in the coming years. The compound is also being used in shale gas refineries as a friction reducer. It is also used as a co-monomer in super-absorbent polymers and for multiple agricultural purposes, especially irrigation. The rising demand from these industries provides an impetus to the growth of the acrylamide monomer market.

The report gives a detailed analysis of the following companies in the global acrylamide monomer market, covering their competitive landscape, capacity, and latest developments like mergers, acquisitions, and investments, expansions of capacity, and plant turnarounds:

The EMR report gives an in-depth assessment of the market, along with analysing the market shares and historical and forecast trends of the end-use segments of the industry. It also provides a detailed analysis of the major regional markets, covering their historical and forecast trends and further breaking the regions into major countries. The report also gives the regional price trends of the product for the historical (2016-2020) and forecast (2021-2026) periods. An assessment of the trade data has also been provided within the report, which looks into the major exporting and importing countries of the product by value and volume. It provides the major demand and price indicators of the industry as well. The EMR report analyses the industry based on Porter’s Five Forces model. A SWOT and value chain analysis as been included within the report as well.

What was the global acrylamide monomer market size in 2020?

The major drivers of the market such as rising disposable incomes, increasing population and rising use of acrylamide monomer in polyacrylamide synthesis, shale gas refineries, super-absorbent polymers, and for multiple agricultural purposes are expected to aid the market growth.

What are the key industry trends of the global acrylamide monomer market?

The rising implementation of government regulations regarding water treatment due to growing water pollution is expected to support the industry growth in the coming years.

What are the major regions of acrylamide monomer according to the market report?

The major regions in the market are North America, Latin America, the Asia Pacific, the Middle East and Africa, and Europe, with the Asia Pacific being the leading producer of the product globally.

The major players in the industry are BASF SE, Mitsui Chemicals, Inc., Ashland, and others.

The global acrylamide monomer market attained a value of USD 3.7 billion in 2020 driven by the growing demand of the product from industries such as gel electrophoresis, tertiary oil refining, ore processing, and the dyes and plastics synthesis. Aided by the rising implementation of government regulations regarding water treatment in industries such as power, petrochemical, and mining and metallurgy, among others , the industry is expected to witness a further growth in the forecast period of 2021-2026, growing at a CAGR of 9.5%. The acrylamide monomer market is projected to reach USD 7.9 billion by 2026.

EMR’s meticulous research methodology delves deep into the market, covering the macro and micro aspects of the industry. Based on its end-uses, the acrylamide monomer market can be segmented into waste and wastewater treatment, petroleum (mostly drilling fluid), pulp/paper, mining, coating, and printing/dying. The major regional markets for acrylamide monomer are North America, Europe, the Asia Pacific, Latin America, and the Middle East and Africa, with the Asia Pacific accounting for the largest share of the market. The key players in the above market include BASF SE, Mitsui Chemicals, Inc., and Ashland, among others.

The global calcium carbide market is expected to grow at a CAGR of about 4.6% in the forecast period of 2021-2026.
Read More

The global non-magnetic metals and alloys market is being driven by the growth in the construction industry. Aided by the rising favourable government policies and several other programmes, the indust...
Read More

The global sodium glutamate market is being driven by the rising demand for processed foods. Aided by the growing food services industry, the market is expected to witness a healthy growth in the fore...
Read More