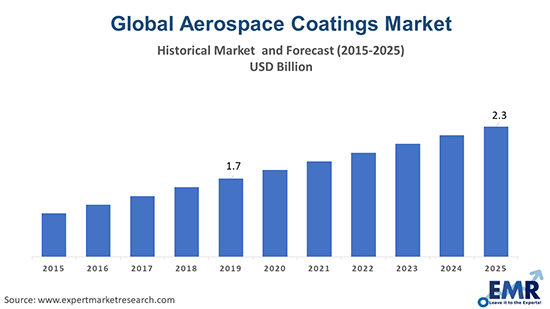 North America is currently dominating the global aerospace coating industry and is likely to lead the global market in the forecast period as well. The growth in the region is being driven by the rising commercial aviation in the regional markets like the United States and Canada. The prominent presence of major players in the region is also aiding the market growth. 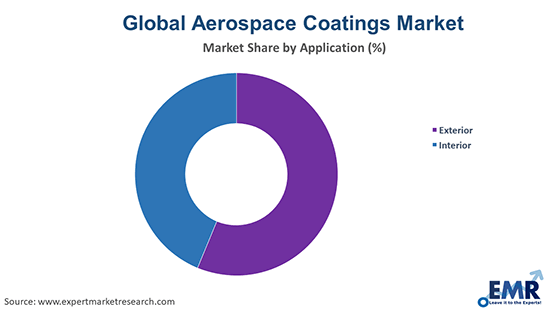 Aerospace coatings are the materials used to boost the performance and to protect the interior and exterior of the aircraft. The coatings are designed in such a way that the fluctuations in temperature and air pressure can be covered. They allow surface defence against UV radiation at higher altitudes, preserves temperature variations, and offer greater resistivity to corrosion.

Based on resin, the market can be divided into the following:

By product, the industry can be divided into the following:

Based on industry category, the market can be divided as follows:

It finds applications in the following segments:

The end-uses can be segmented as follows:

The regional markets for aerospace coatings can be divided into North America, Europe, the Asia Pacific, Latin America, and the Middle East and Africa. 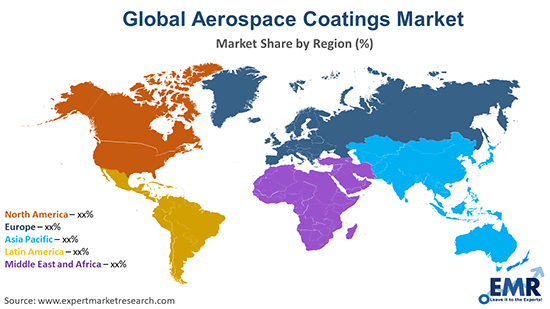 The demand for aerospace coatings is being driven by the thriving demand for commercial aircraft throughout the world. Travelling by air has become an affordable option for most of the population, especially in developing countries. Consumers in the developing regions now prefer modes of transportation that are convenient as well as provide speed. Efficient and lightweight aircraft have now initiated short route operations in the developing countries as well. This is boosting the demand for aerospace coatings. Increased international air passenger traffic has triggered the demand for commercial aircraft and, thus, increased the production of commercial aircraft. The considerable growth of the aerospace coatings industry is significantly influenced by the scenario for aviation production and the growing fleet size.

The report gives a detailed analysis of the following key players in the global aerospace coatings market, covering their competitive landscape, capacity, and latest developments like mergers, acquisitions, and investments, expansions of capacity, and plant turnarounds:

What was the global aerospace coatings market size in 2020?

In 2020, the global aerospace coatings market attained a value of nearly USD 1.7 billion.

The major drivers of the industry, such as rising disposable incomes, increasing population, rising commercial aviation, rising fleet size, and rapid urbanisation, are expected to aid the market growth.

What are the key industry trends of the global aerospace coatings market?

The key trends guiding the growth of the market include the rising demand for commercial aircraft and increasing international air passenger traffic.

What are the major regional markets of aerospace coatings, according to the EMR report?

What are the major resins of aerospace coatings in the industry?

The major resins of aerospace coatings in the industry are polyurethane and epoxy, among others.

What are the leading products of aerospace coatings in the market?

The leading products of aerospace coatings in the market are liquid and powder.

What are the significant industry categories in the market?

The significant industry categories in the market are OEM and MRO.

The major application segments in the industry are exterior and interior.

What are the leading end use sectors in the market?

The leading end use sectors in the market are military aviation, commercial aviation, and general aviation.

The global aerospace coatings market attained a value of USD 1.7 billion in 2020 driven by the growing commercial aviation sector. Aided by the rising fleet size, the market is expected to witness a further growth in the forecast period of 2022-2027, growing at a CAGR of 5%. The market is projected to reach USD 2.3 billion by 2026.

EMR’s meticulous research methodology delves deep into the market, covering the macro and micro aspects of the industry. By resin, the market is divided into polyurethane and epoxy, among others. Based on product, the industry is segmented into liquid and powder. On the basis of industry category, the market is divided into OEM and MRO. By application, the industry is categorised into exterior and interior. The major end use sectors in the market are military aviation, commercial aviation, and general aviation. The major regional markets for aerospace coatings are North America, Europe, the Asia Pacific, Latin America, and the Middle East and Africa, with North America accounting for the largest market share. The key players in the above market include Akzo Nobel N.V., BASF Corporation, Hentzen Coatings, Inc, PPG Industries, Inc., BryCoat Inc., IHI Ionbond AG, and Mankiewicz Gebr. & Co, among others.