The global aluminium fluoride market is expected to grow at a CAGR of 4% in the forecast period of 2023-2028. 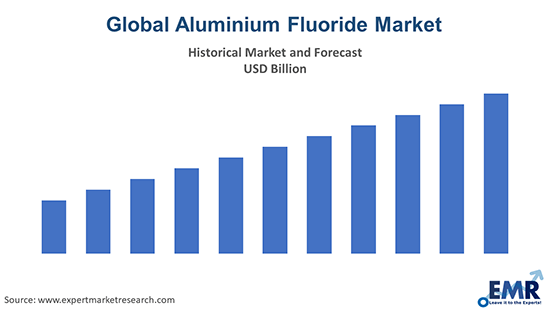 Rapid urbanisation, rising income in urban areas, and industrial development are driving the growth of the aluminium fluoride industry in the Asia Pacific, especially in countries such as China, Japan, India, and South Korea.

China is one of the largest producers of aluminium, and the aluminium market in the country is expected to continue growing in the forecast period as a result of the increased collaboration between the government and other industries to encourage the development of cutting-edge technologies that reduce processed waste and lower production costs, thus, boosting the growth of the aluminium fluoride industry as well. The growing demand for aluminium fluoride from emerging economies like China and India, as well as the increased use of reprocessed aluminium products, further offer lucrative market expansion opportunities.

Due to the increased product consumption in organic complex synthesis processes, the market is expected to witness substantial growth in North America. During the forecast period, increasing investments and rising per capita revenue in the North America region are expected to drive the market growth. Automobile manufacturers in the United States are attempting to reduce vehicle weight in accordance with government regulations on gas emissions, which should result in the increased use of aluminium in automobiles, thus stimulating the market growth of aluminium fluoride.

Aluminium fluoride, with the molecular formula AlF3, is an inorganic compound that is used in a variety of industrial processes, most notably in the production of aluminium. It is a colourless solid that can be made synthetically or can be naturally found as the minerals, rosenbergite and oskarssonite. 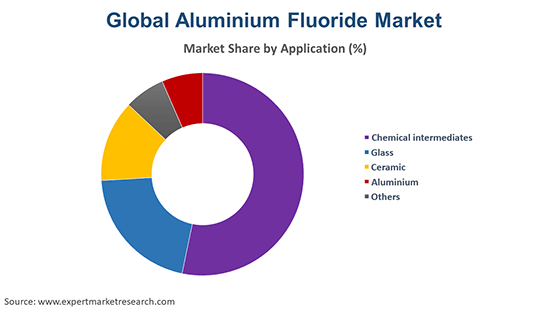 On the basis of type, the market is segmented into:

Aluminium fluoride finds its application in the following segments:

The regional markets for aluminium fluoride can be divided into North America, Europe, the Asia Pacific, Latin America, and the Middle East and Africa. 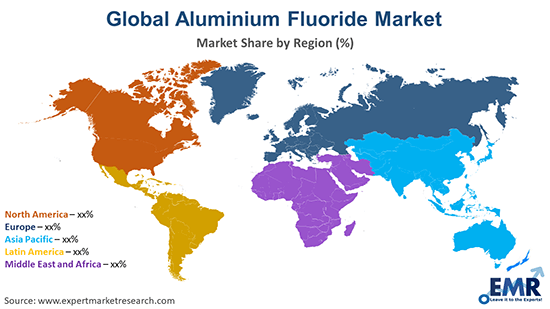 With the extensive use aluminium fluoride in the production of aluminium, the growth of the aluminium market is expected to contribute to the increased demand for aluminium fluoride. Aluminium's ductility, conductivity, and malleability is enabling its increasing usage in the automotive, cosmetics, and pharmaceutical industries. Because of high car ownership rates and increased awareness about reducing the average vehicle weight, aluminium consumption in the motor vehicle market is expected to further grow. The increased consumer awareness of the benefits of aluminium and the ongoing technological advancements is projected to expand the aluminium consumption in the coming years.  Aluminium serves a wide range of industries, including ceramics, glass, transportation, food, and automobiles. Because of its lightweight and corrosion resistance, aluminium is widely used in the construction industry. It is also used extensively in electrical transmission lines, which are witnessing a healthy growth owing to infrastructural improvements. Thus, the extensive and growing downstream demand for aluminium is expected to bolster the demand for aluminium fluoride in the coming years.

The report gives a detailed analysis of the following key players in the global aluminium fluoride market, covering their competitive landscape, capacity, and latest developments like mergers, acquisitions, and investments, expansions of capacity, and plant turnarounds:

The major drivers of the market include the healthy economic growth, extensive downstream use in the production of aluminium cans, increasing usage in the automotive, cosmetics, and pharmaceutical industries, increased awareness about reducing the average vehicle weight, technological advancements, and infrastructural improvements.

What are the key industry trends of the global aluminium fluoride market?

The rise in the popularity of convenience packaged beverages and foods and extensive use aluminium fluoride in the production of aluminium are the key industry trends propelling the market's growth.

What are the major regional markets of aluminium fluoride, according to the EMR report?

What are the types of aluminium fluoride in the market?

On the basis of type, the market is segmented into dry, wet, and anhydrous.

The major players in the industry are Do-Fluoride Chemicals Co., Ltd, Fluorsid S.p.A., Industries Chimiques du Fluor, and Tanfac Industries Ltd., among others.

The global aluminium fluoride market is driven by the rise in the popularity of convenience packaged beverages and foods. Aided by increasing usage in the automotive, cosmetics, and pharmaceutical industries and extensive use aluminium fluoride in the production of aluminium, the market is expected to witness further growth in the forecast period of 2023-2028, growing at a CAGR of 4%.

EMR's meticulous research methodology delves deep into the market, covering the macro and micro aspects of the industry. On the basis of type, the market is segmented into dry, wet, and anhydrous. Aluminium fluoride finds their major application in chemical intermediates, glass, ceramic, and aluminium, among others. The major regional markets for aluminium fluoride market are North America, Europe, the Asia Pacific, Latin America, and the Middle East and Africa. The major players in the industry are Do-Fluoride Chemicals Co., Ltd, Fluorsid S.p.A., Industries Chimiques du Fluor, and Tanfac Industries Ltd., among others.