Growing Demand for Aluminium in the Transport Industry Aiding the Market

Some of the leading application sectors for the metal are the transport and the construction industries. The Asia Pacific and the Americas are among the regions with high maturity markets, with the Asia Pacific likely to dominate the growth rates in the future. Aluminium is widely produced in the Asia Pacific regions like China and India, along with Russia, Canada, and the United Arab Emirates. China is one of the leading producers of aluminium, accounting for over half the world’s production of aluminium. Moreover, various countries in the Asia Pacific region and the Middle East and Africa are expected to witness capacity expansions of aluminium manufacturing in the forecast period. The growing demand in India is fuelled by the ever-increasing transportation, construction, and power industries.

Australia is another important region in the Asia Pacific region and one of the net exporters of the product. The market is supported by its end-use industries, such as construction and packaging, among others. The country is also the largest producer of alumina and bauxite. The demand for aluminium in other regions is also expected to grow in the coming years, driven by the growing automobiles industry. The demand for aluminium in some European countries, as well as the United States, is expected to grow further due to increasing consumption by aircraft manufacturers.

Increasing Applications of Aluminium in Consumer Electronics Augmenting the Market

As aluminium is lightweight and cost-effective, it finds extensive applications in the manufacturing of consumer electronics. Hence, the growing demand for televisions, laptops, smartphones, and tablets, among others, is driving the market growth. With the increasing preference for environment-friendly and sustainable consumer electronics, the aluminium market is expected to witness a healthy growth. Various aluminium manufacturers are increasingly offering innovative and superior aluminium alloys. This, in turn, is bolstering the use of the metal in complex designing solutions in consumer electronics. Further, the rising utilisation of aluminium as a substitute for plastics and steel owing to its reliability, versatility, high mechanical strength, cost-effectiveness, and light weight is likely to augment the market.

Aluminium refers to the chemical element having the atomic number 13. It is a silver-white, soft, non-magnetic, and ductile metal in the boron group. It is low in density and has the ability to withstand corrosion through the passivation phenomenon. The metal and its alloys are critically important to the aerospace, transportation, and construction industries. 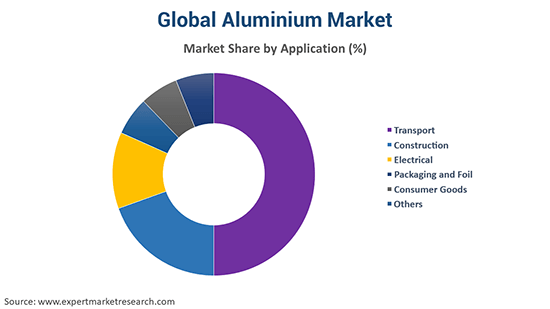 By type, it can be bifurcated into primary and recycled.

The major application segments of aluminium are:

The EMR report also covers the regional markets of aluminium like North America, Europe, the Asia Pacific, Latin America, and the Middle East and Africa. 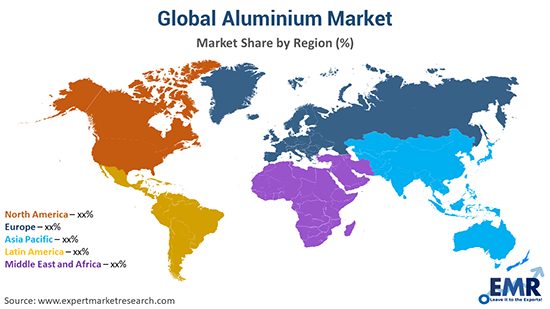 The downstream industries are significantly driving the demand for aluminium. The transportation industry is rapidly growing, thus, providing an impetus to the demand for aluminium. Moreover, aluminium is widely used in developed countries like the United States, Japan, and some countries in the European Union, due to the expansion of the automotive industry. Aluminium has applications in the production of lightweight as well as electronic vehicles. The increasing environmental concerns are also fuelling the demand for electric vehicles and providing impetus to the aluminium market growth. The increased application of the product in making aluminium sheets to replace steel is further driving the market.

The consumption of aluminium in the manufacturing of aircraft by the United States and Europe is likely to witness a healthy growth in the coming years. The replacement of older aircraft with new and better fuel-efficient methods is providing further impetus to the aluminium market growth. The rising use of the material in the electrical engineering as well as the machinery and equipment industries are driving the growth of the market forward. In addition, technological advancements and innovations are expected to drive the market growth of aluminium in the coming years.

The growing construction industry in developing countries like India and China is driving the demand for aluminium. These countries are witnessing an increased rate of construction in order to expand their infrastructure to meet the demand of the rising population due to the rapid migration to the big cities, which is likely to provide lucrative growth opportunities to the aluminium market in the coming years.

Key Players in the Global Market for Aluminium

The report gives a detailed analysis of the following key players in the global aluminium market, covering their competitive landscape, capacities, and latest developments like mergers, acquisitions, and investments, expansions of capacity, and plant turnarounds:

The comprehensive EMR report provides an in-depth assessment of the market based on Porter’s five forces model, along with giving a SWOT analysis. The report also gives the price analysis and trade data for the aluminium market.

What was the global aluminium market size in 2020?

In 2020, the global aluminium market attained a volume of nearly 68.6 million metric tons.

The major drivers of the industry are  increasing environmental concerns, increased application of the product in making aluminium sheets, consumption of aluminium in the manufacturing of aircraft, rising use of the material in the electrical engineering as well as machinery and equipment industries, rising technological advancement, growing construction industry, and rising population.

What are the key industry trends of the global aluminium market?

What are the major regional markets of the global aluminium market, according to the EMR report?

The major regions in the industry are North America, Latin America, Europe, Middle East and Africa, Asia Pacific with Asia Pacific accounting for the largest share in the market.

What are the types of aluminium in the market?

Primary and recycled are the types of aluminium in the market.

What is the dominant application in the industry?

The transport segment dominates the application in the market.

The global aluminium market attained a volume of nearly 68.6 million metric tons in 2020, driven by the rising demand of aluminium from downstream industries. Aided by the growing applications of the product in various industries like automobile and increased application of the product in making aluminium sheets, the market is expected to witness a further growth in the forecast period of 2022-2027, growing at a CAGR of 3.63%.

EMR’s meticulous research methodology delves deep into the market, covering the macro and micro aspects of the industry. Based on its types, the global aluminium industry can be segmented into primary and recycled. The transport segment dominates the application in the market. The major regional markets for the global aluminium market are North America, Latin America, Europe, Middle East and Africa, and Asia Pacific, with Asia Pacific accounting for the largest share of the market. The key players in the above market include China Hongqiao Group Limited, Aluminum Corporation of China Limited, Rio Tinto, Emirates Global Aluminium PJSC , Alcoa Corporation, United Company RUSAL Plc, and Norsk Hydro ASA, among others.