The global construction market is driven by the rising government spending on planned infrastructure projects. In 2016, Latin America and the Asia Pacific accounted for more than half of the world’s construction output. The two regions are expected to hold a share of more than 55% by 2021. Countries such as India, the United States, and China are expected to account for a 50% share in the projected incremental construction spending. The successful implementation and potential benefits of the construction outsourcing model on a large-scale in the United States is an emerging trend in the region. The global construction sector is aided by the reduction in time enabled by the usage of technologies such as BIM (3D & 4D), laser scanning, 3D printing, and smart building systems. 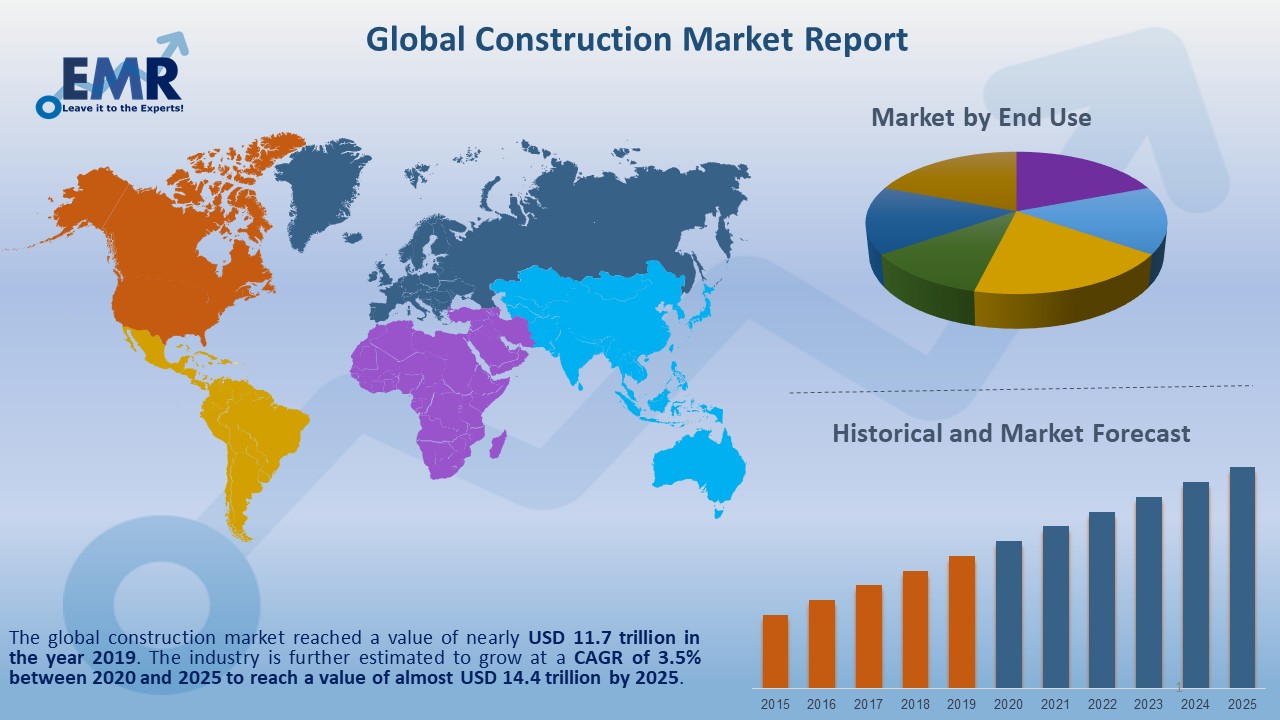 Europe was the largest construction market by value in 2020 after the Asia Pacific region. In Europe, countries such as the United Kingdom, Germany, France, and Italy are driving the market growth due to their economies stabilizing, which are creating greater employment opportunities in the region. The rising need for the modernization of ageing infrastructure and the growing housing demand in the United Kingdom are strengthening the industry growth. However, Brexit is expected to impact the Europe construction market significantly. Currently, the United Kingdom exports most of its total building materials exports to European countries. It also imports a significant percentage of the complete construction building materials from other European countries.

Construction refers to the act of creating commercial, institutional, or residential infrastructures like bridges, buildings, roads, and other structures. Based on end-use, the construction industry can be divided into:

The global construction market is driven by the growing population, increasing urbanisation, and the rise in domestic manufacturing. The residential segment is exhibiting a strong growth, primarily in the single-family construction segment. The non-residential buildings sector has also shown a growth in the historical period, thus, further enhancing the growth of the global construction market. The increasing modernisation of transportation infrastructure is also aiding market growth. Infrastructure related to sporting events is propelling the market forward. Bilateral trade agreements and support by China in the form of increasing Chinese investments in Latin America are augmenting the growth of the industry.

An increase in the infrastructure and housing spending by governments across the globe is invigorating the market growth for construction. Increasing private sector investments in construction is further aiding the growth of the industry. Expanding manufacturing footprint and rising foreign investments in India are also enhancing the construction market growth. In developed regions, such as North America, active non-residential construction activities, such as education, healthcare, and industrial facilities, will be the key drivers for the industry growth in the coming years. The increasing demand for consumer-oriented construction will drive the construction market in the forecast period. In South America, Argentina and Colombia are expected to drive the market aided by the rising demand from the industrial and manufacturing construction sectors.

The rising disposable income is likely to drive construction demand in the forecast period. The global construction industry is further propelled forward by the significant growth in the construction sector in emerging markets, such as India, China, Vietnam, Australia, and Indonesia. Increased investment in construction activities across various industries is providing further impetus for the construction market growth. Different technologies such as DataCAD, CADKEY, ArchiCAD, ConSteel, REVIT, NavisWorks, StruCad and Nemetschek, Corel Draw, and Bentley Systems, among others, are being increasingly used in the global construction market, which saves on time and costs during the entire process of construction, thus, further pushing the growth of the industry.

The report gives a detailed analysis of the following key players in the global transformer oils market, covering their competitive landscape, capacity, and latest developments like mergers, acquisitions, and investments, expansions of capacity, and plant turnarounds:

EMR’s meticulous research methodology delves deep into the market, covering the macro and micro aspects of the industry. Based on the end-user segment, the construction market can be segmented into commercial, residential, industry, education and research, and medical and health, among others. North America, Latin America, Europe, the Middle East and Africa, Europe, and the Asia Pacific are the major regions in the construction market, with the Asia Pacific accounting for the majority of the market share. The key players in the above industry are Skanska AB, Fluor Corporation, STRABAG International GmbH, Vinci, PCL Constructors Inc., Consolidated Contractors Company, GS E&C Corp., CIMIC Group Limited, Obayashi Corporation, and McConnell Dowell Corporation Limited, among others.

The major drivers of the industry such as rising disposable incomes, increasing population, rising urbanisation, rising single family constructions, growing residential infrastructure planned by governments, rising FDI flows in countries like India, and growth in industrial and manufacturing infrastructure are driving the growth of the construction market globally. EMR’s research methodology uses a combination of cutting-edge analytical tools and the expertise of their highly accomplished team, thus, providing their customers with industry insights that are accurate, actionable, and help them remain ahead of their competition.

The global green concrete market is being driven by the rising demand from the construction sector. Aided by the growing R&D activities, the market is expected to witness a robust growth in the foreca...
Read More

The global plywood market size reached a value of almost USD 43 billion in the year 2020. The plywood industry is further expected to grow at a CAGR of 5% between 2021 and 2026 to reach a value of alm...
Read More