Global Anhydrous Caffeine Market to Grow at a CAGR of 8% During 2021-2026, Aided by the Growing Product Utilisation in Functional Foods

The global anhydrous caffeine market is expected to grow at a CAGR of 8% in the forecast period of 2022-2027.

Anhydrous caffeine is well established as a performance enhancer. Several studies have revealed that caffeine improves endurance performance in activities like running and cycling. Besides improving muscle strength and endurance, it also claims to burn fat. Owing to these benefits, caffeine anhydrous is frequently used by manufacturers as an ingredient in various supplement categories. It can be found in pre-workout powder or pills along with certain food products like caffeinated energy bars or chewing gum. With the growing shift towards health and wellness, the demand for nutritional and dietary supplements is growing, which, in turn, is aiding the growth of the anhydrous caffeine industry.

Region-wise, there has been a rise in the consumption of caffeine in South and East Asia owing to the changing consumer lifestyle. Several Asian countries like China, India, and Indonesia, among others, are mostly tea-consuming countries, as tea is the traditional beverage in these regions. However, there has been an increase in demand for caffeine-infused beverages in the regions owing to the growing western influence. These factors are expected to propel the market for anhydrous caffeine in South and East Asia. 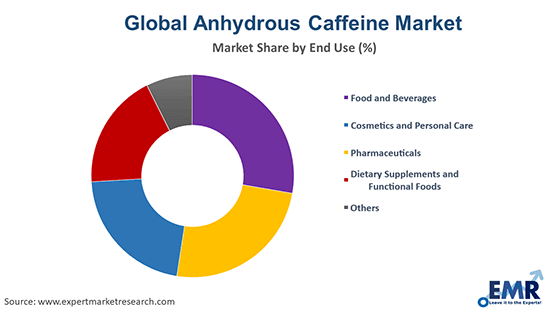 Caffeine is a substance that naturally occurs in several plant species, such as tea, coffee, and others. Anhydrous caffeine refers to the caffeine, which does not contain water. It is primarily obtained from the seeds and leaves of these plants. The plant is harvested, and caffeine is extracted from the plant matter and dehydrated. This results in the formation of highly concentrated caffeine powder. Caffeine anhydrous can help improve alertness and exercise performance.

Based on type, the market is bifurcated into:

On the basis of form, the industry can be segmented into:

The various sources of anhydrous caffeine are:

Based on end use sectors, the industry is categorised into: 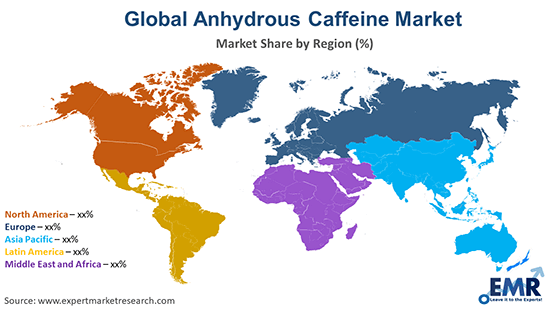 The rising awareness regarding the antioxidant properties of caffeine and its role in preventing the signs of premature ageing is driving the demand for anhydrous caffeine in cosmetics and personal care applications. Further, the growing demand for plant-based cosmetics and personal care products is expected to bode well for the industry. The new product launches and growing R&D activities by the manufacturers is expected to aid the industry growth over the forecast period. Moreover, as anhydrous caffeine contains a high amount of caffeine, it is becoming increasingly popular among the millennials to enhance alertness and focus. The interest of consumers towards caffeine-infused energy and sports drinks is expected to boost the sales of the product. Other factors like the rising disposable incomes, improving living standards, and growing demand for functional foods are also aiding the industry.

The report gives a detailed analysis of the following key players in the global anhydrous caffeine market, covering their competitive landscape, capacity, and latest developments like mergers, acquisitions, and investments, expansions of capacity, and plant turnarounds:

What is the growth rate of the global anhydrous caffeine market?

The global anhydrous caffeine market is projected to grow at a CAGR of 8% between 2021 and 2026.

The major drivers of the industry, such as rising disposable incomes, increasing health awareness, rising demand from the developing regions, growing consumption of caffeine-infused beverages, and increase in demand for dietary supplements, are expected to aid the market growth.

What are the key industry trends of the global anhydrous caffeine market?

The key market trends guiding the growth of the industry include the growing applications of anhydrous caffeine in the cosmetic and personal care industry and new product launches.

What are the major regional markets of anhydrous caffeine, according to the EMR report?

What are the leading types of anhydrous caffeine in the market?

The leading types of anhydrous caffeine in the market are natural and synthetic.

What are the major forms of anhydrous caffeine in the industry?

The major forms of anhydrous caffeine in the industry are powder and granular.

What are the significant sources of anhydrous caffeine in the market?

The significant sources of anhydrous caffeine in the market are coffee beans, tea leaves, cacao beans, synthetic sources, and guarana beans, among others.

What are the leading end use sectors in the industry?

The leading end use sectors in the industry are food and beverages, cosmetics and personal care, pharmaceuticals, and dietary supplements and functional foods, among others.

The major players in the industry are Foodchem International Corporation, BASF SE, Aarti Industries Limited, and CSPC Pharmaceutical Group Limited, among others.

The global anhydrous caffeine market is being driven by the increased utilisation of anhydrous caffeine in the preparation of dietary and nutritional supplements. Aided by the growing R&D activities and expanding applications in the cosmetics industry, the market is expected to witness a further growth in the forecast period of 2022-2027, growing at a CAGR of 8%.

EMR’s meticulous research methodology delves deep into the market, covering the macro and micro aspects of the industry. By type, the market is divided into natural and synthetic. Based on form, the industry is bifurcated into powder and granular. On the basis of sources, the industry is divided into coffee beans, tea leaves, cacao beans, synthetic sources, and guarana beans, among others. By end use, the market is segmented into food and beverages, cosmetics and personal care, pharmaceuticals, and dietary supplements and functional foods, among others. The major regional markets for anhydrous caffeine are North America, Europe, the Asia Pacific, Latin America, and the Middle East and Africa. The key players in the above market include Foodchem International Corporation, BASF SE, Aarti Industries Limited, and CSPC Pharmaceutical Group Limited, among others.