Asia Pacific Natural Sweeteners Market to be aided by the Projected Growth in the Global Stevia Market at a CAGR of 8.5% between 2020 and 2025

The Asia Pacific natural sweeteners market is being driven by the growing stevia industry in the region. The global stevia extract demand was around 3.5 thousand metric tons in 2019. In 2019, the global value of stevia production was around USD 520 million. The stevia industry is expected to witness a healthy growth in the forecast period of 2020-2025, growing at a CAGR of 8.5%. It is further estimated to reach a value of nearly USD 849 million by 2025. 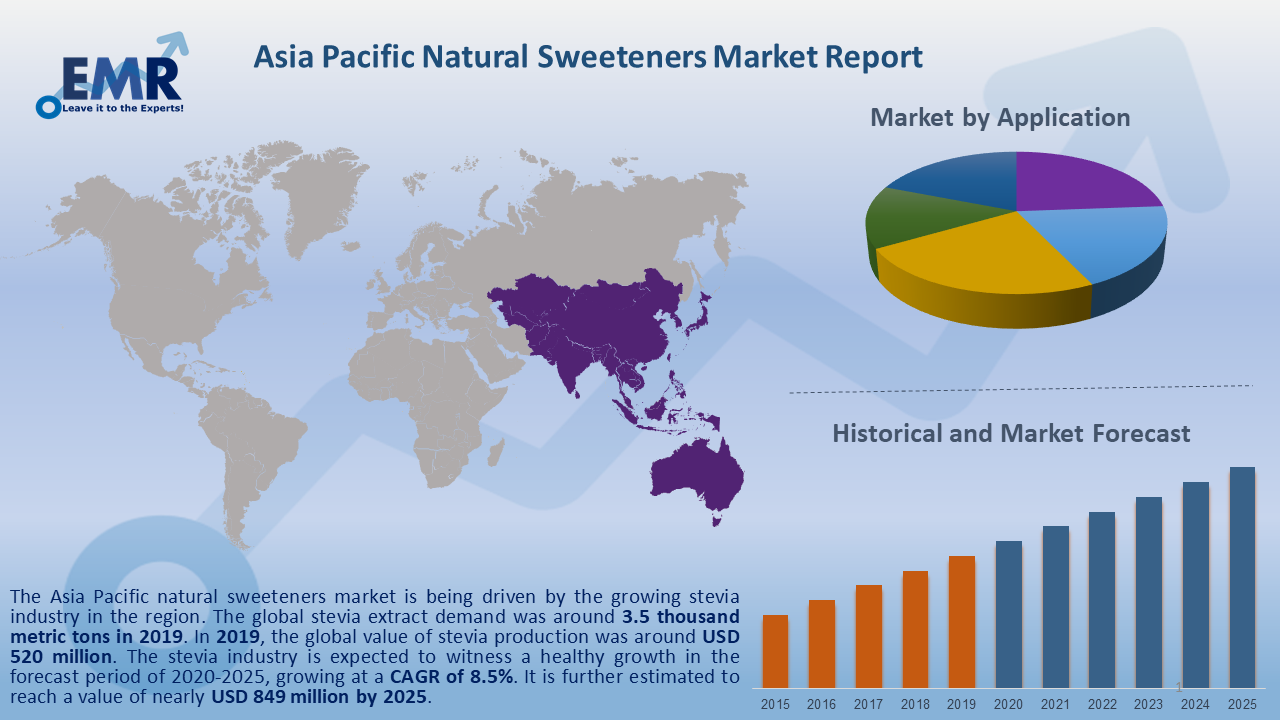 The Asia Pacific is the global leader in the stevia industry, accounting for about 87% of the world’s total stevia production. China is the major producer of stevia in the region, accounting for about 91% of the total stevia production in the Asia Pacific. China has a huge consumer base which contributes to its domestic market whereas the increasing demand for stevia across the different parts of the world provides a boost to its overseas market as China is a major exporter of stevia. Japan is one of the leading consumers of stevia. Stevia accounts for almost 40% of the total sweeteners market share in Japan. Stevia contains up to 200 times the sweetness of sugar and, thus, is being widely incorporated into leading soft drinks such as Pepsi True and Coca Cola Life along with baked goods, candies, and other food products.

Latin America and North America are also emerging as the significant stevia markets, globally. The stevia demand is these regions have been driven by the increasing number of health-related problems like diabetes and obesity. The governments in the two regions are also condemning the use of sugar to control the increased number of health issues, which is further aiding the market. The food and beverage companies are also preferring natural sweeteners over artificial ones to meet the rising consumer demand for natural and low-calorie sweeteners. In Latin America and North America, the natural sweeteners find its maximum application in soft drinks while sports nutrition and dairy are the other leading sectors in the regions.

Natural sweetener refers to a sweetener, which occurs naturally in plants and in other sources, rather than being prepared in a lab. They can be categorised as stevia, maple syrup, raw honey, molasses, and coconut sugar, among others. Based on intensity, the industry can be divided into:

Natural sweeteners find their applications in sectors like food, beverages, pharmaceuticals, and personal care, among others. They are distributed in the market via hypermarkets/supermarkets, convenience stores, retail stores, online retailers, and others.

The report provided by EMR focuses on the regional markets of the product like China, Japan, India, and Korea, among others.

The Asia Pacific natural sweeteners industry is being driven by the rising health concern among the consumers, resulting in an increased demand for the healthy products. As the consumers have become more health-conscious, the demand for drinks with low sugar and low-calorie content has increased. Thus, producers are opting for low-calorie and efficient alternatives for sugar like stevia, further propelling the Asia Pacific natural sweeteners industry forward.

The food and beverage sector has seen a healthy growth in the region, which is also aiding the growth of the Asia Pacific natural sweeteners industry. The companies are preferring natural sweeteners over the artificial ones to meet the growing demand for healthier products. More than 5,000 food and drink products now contain steviol glycosides (an active compound of stevia). It was estimated that steviol glycosides have the potential to replace about 30% of all dietary sweeteners in the coming years.

Globally, the natural sweeteners industry is being driven by the growing incidences of lifestyle and sugar-related diseases. In Latin America and North America, the use of natural sweeteners has increased due to the rise in the cases of diabetes and obesity among the people, thus, driving the industry further. In 2015, 30.3 million Americans or 9.4% of the population was diagnosed with diabetes, which is further growing by 1.5 million every year. The governments in the regions is also condemning the use of sugar by applying high levies on sugary products or sugar. Countries like Mexico and U.S. are contributing to the growth of the natural sweeteners industry by producing and exporting non-alcoholic beverages.

The report gives a detailed analysis of the following key players in the Asia Pacific market for natural sweeteners, covering their competitive landscape, capacity, and recent developments like mergers and acquisitions, investments, capacity expansion, and plant turnarounds:

The EMR report provides an in-depth analysis of the industry based on SWOT and Porter’s five forces analysis.

The Asia Pacific natural sweeteners market is being driven by the increasing demand of stevia, a kind of natural sweetener. The global stevia industry attained a value of USD 520 million in 2019. It is expected to witness a further growth in the forecast period of 2020-2025, growing at a CAGR of 8.5%. The global stevia industry is projected to reach USD 849 million by 2025.

The major drivers of the industry such as rising disposable incomes, increasing population, increasing health consciousness, and rising demand for sugar-substitutes with low-calorie content are expected to aid the market growth. EMR’s research methodology uses a combination of cutting-edge analytical tools and the expertise of their highly accomplished team, thus, providing their customers with market insights that are accurate, actionable, and help them remain ahead of their competition.