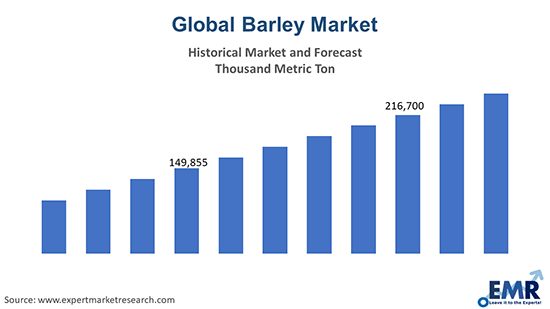 Europe is one of the Leading Regional Markets for Barley

The major consuming regions are the European Union, Russia, Saudi Arabia, and China. Saudi Arabia, China, Iran, and Libya, on the other hand, import significant volumes of barley from other regions. The product is widely being used for its end-uses, including its use as feed as well as its application as a feedstock in beer production.

Europe, being the largest producer and consumer of barley, consumes up to 90% of malt barley to produce beer. The major barley producing regions include the European Union, accounting for over 40% of the global output of the product. The major producers of barley within the Europe Union include France and Germany, with the majority of their output utilised in making beer. Russia and Ukraine are among the largest barley producing nations globally, occupying a significant market share in the global barley market. These regions are supported by the growing domestic as well as export demand. Russia produces nearly 65% of the total barley in Europe.

Australia exports around 33% of barley, whereas the European Union exports nearly 20% of barley. Ukraine and Russia follow Australia and the European Union as the other major export markets. Ukraine and Russia export large volumes of the product to countries like Saudi Arabia and China, especially exporting feed type barley. The exports to China and Saudi Arabia from Europe account for around 87% of the total share. Russia, especially, majorly exports to the Middle Eastern countries to meet their regional demand. The country exports nearly half of its output to Saudi Arabia. Other regions that rely heavily on imports from Russia include Kuwait, Iran, and Jordan.

Another major consumer of barley is Canada, which consumes the majority of its barley for feed purposes. The demand for industrial consumption is also growing in the region, accounting for 20% of the barley consumption. The major barley producing regions in Canada are Alberta as well as Saskatchewan, together accounting for 70% of the country’s total output. The rest of the share is produced in British Colombia and Manitoba. The region also exports majorly to the United States and China. Japan also imports high volumes of barley from Canada for brewing purposes. 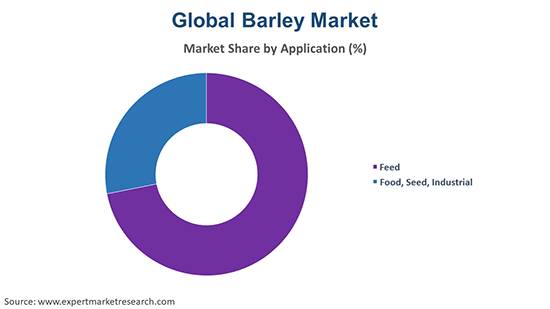 Barley is a grain of cereal that can be used for making bread, beverages, stews, and other food products. Being a whole grain, it provides a wide range of nutrients like fibre, vitamins, and other minerals. It, thus, offers a variety of health benefits. It has wide applications in the following segments: 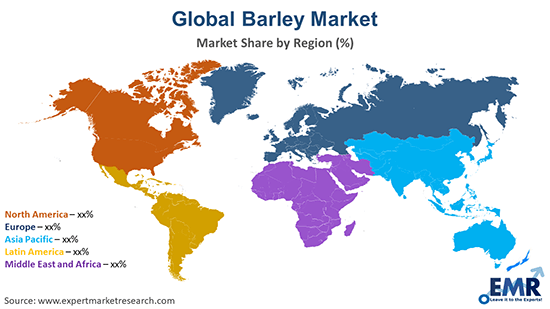 The global market for barley is being driven by the growing demand from the Middle Eastern countries, where it is widely being used for feed purposes. The growing barley demand in countries like Saudi Arabia, Jordan, and Kuwait is providing a push to the global barley market.

The most dominant application segment for barley is the feed sector. The growing demand for feed across the region, especially in the United States, is supporting the market. The growing demand for the product among consumers in Europe is aiding the overall demand as well as exports. Nations like Saudi Arabia import huge volumes of barley for feed purposes only.

The expanding awareness about the health benefits of barley is leading to its rising consumption among the health-conscious population. It is a rich source of dietary fibre and has many beneficial nutrients, which play a critical role in improving digestion, promoting weight loss, lowering cholesterol levels, and supporting a healthier heart. Also, it has a mild nutty flavour and chewy texture, thereby increasing its use in the preparation of various dishes. The worldwide cultivation of barley to meet the increasing demand from various end-use sectors is contributing to the market expansion. In addition, the improvement in adaptability of barley to different climates through genetic evolution is enhancing the cultivation of the crop. The introduction of new varieties of barley with high yields is expected to augment the market over the forecast period. Further, the growing environmental consciousness is resulting in the increased use of barley to produce fuel ethanol. The increasing research activities to explore the potential applications of barley in the pharmaceutical sector, owing to its health benefits and medicinal properties, are likely to propel the barley market growth further.

Malt barley is the most common type of the grain used in the brewing sector to make beer. The growing demand for barley is, thus, being driven by the market for beer, which is rapidly growing. A considerable volume of the product goes into brewing. It is also further used to produce both alcoholic and non-alcoholic beverages. China and Japan import barley from the major exporters of the grain for beer production.

In September 2020, Malteurop Groupe expanded the production capacity at its Albacete plant in Spain from 60,000 to 100,000 tonnes per year.

Key Players in the Global Market for Barley

The report gives a detailed analysis of the following key players in the global barley market, covering their competitive landscape, capacity, and latest developments like mergers, acquisitions, and investments, expansions of capacity, and plant turnarounds:

What was the global barley market size in 2020?

In 2020, the global barley market attained a volume of nearly 149,859 thousand metric tons.

What is the growth rate of the barley market?

The major drivers of the industry, such as rising disposable incomes, increasing population, growing barley demand in many countries, and rapidly growing beer industry, are expected to aid the market growth.

What are the key industry trends of the global barley market?

The key market trend guiding the growth of the market includes the increase in consumption of soy and corn in feed and biofuel industries.

What are the leading applications of barley in the market?

Food, seed, industrial and feed are the leading applications of barley in the market.

The major players in the industry are Soufflet Group, Malteurop Groupe, GrainCorp Limited, Boortmalt Group, and Cargill, Incorporated, among others.

The global barley market attained a volume of nearly 149,859 thousand metric tons in 2020, driven by the rapidly growing beer industry. Aided by technological advancements, the market is expected to witness a further growth in the forecast period of 2022-2027, growing at a CAGR of 6.34%. The market is projected to reach a volume of around 216,702 thousand metric tons by 2026.

EMR’s meticulous research methodology delves deep into the market, covering the macro and micro aspects of the industry. Based on applications, the market can be segmented into Food, seed, industrial and feed. The major regional markets for the product are North America, Europe, the Asia Pacific, Latin America, and the Middle East and Africa, with Europe accounting for the largest share of the market. The key players in the above market include Soufflet Group, Malteurop Groupe, GrainCorp Limited, Boortmalt Group, and Cargill, Incorporated, among others.

EMR’s research methodology uses a combination of cutting-edge analytical tools and the expertise of their highly accomplished team, thus, providing their customers with market insights that are accurate, actionable, and help them remain ahead of their competition.  is the feed sector. The increasing demand for feed is, thus, supporting the demand growth for barley. The growing demand for feed across the region, especially the United States, is supporting the global barley market. The growing demand for the product among consumers in Europe is aiding the overall demand growth as well as exports. Nations like Saudi Arabia import huge volumes of the product for feed purposes only.

The global dried beans market was driven by the increasing health consciousness among consumers in the historical period. Aided by the rapid development of the food processing industry and changing co...
Read More

The global bamboo fibre market was driven by the growing awareness about environmental conservation and sustainability in the historical period. Aided by the rapid transformation of the agricultural s...
Read More

The global coffee market attained a value of USD 114.1 billion in 2020, driven by the growing awareness of health benefits associated with coffee consumption. Aided by increased implementation of inno...
Read More

The global garlic market is being driven by the rising awareness regarding the therapeutic benefits of garlic. Aided by increasing expansion of Ayurveda and the growing preference for organic food, th...
Read More