The global brewing enzymes market is expected to grow at a CAGR of 6% over the forecast period of 2023-2028 to attain a value of USD 536 million by 2026. The market is being driven by the rise in disposable incomes among consumers and the increasing consumption of beers globally. 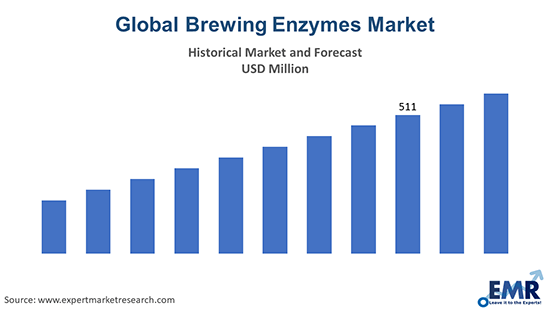 The amylase segment, among other types, accounted for one of the largest shares in the industry owing to its cost-effectiveness, and reduced time and ease to optimise the process involving amylase. As the access to malt in regions like Africa and the Asia Pacific is lower, the consumption of amylase has increased significantly in such regions, which is driving the growth of this segment, and ultimately aiding the overall market growth. Further, microorganisms, among other sources of brewing enzymes, accounts for a significant share in the global industry as they can produce a significant amount of the desired enzyme and are easy to handle.

Region-wise, the Asia Pacific is expected to account for a significant share in the global market owing to the presence of a large population and increased production and consumption of brewing enzymes in the region. Within the Asia Pacific, countries like Vietnam, China, Australia, and New Zealand serve as the significant markets for the product. Further, in Western European countries, the growing preference of craft breweries, along with the rising health awareness regarding beer consumption, has fuelled the growth of the brewing enzymes industry in the region.

Enzymes are biological catalysts that hasten the biochemical and molecular reaction in substances, and thus, are utilised for the maintenance and production of various food products. Enzymes such as amylases, proteases, and others are becoming increasingly important in the brewing industry in order to accelerate the production of beers without affecting their original structure. 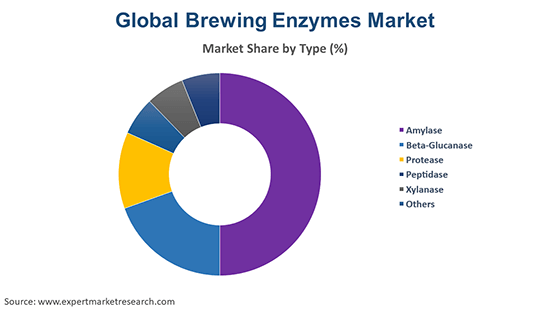 The various sources of brewing enzymes are:

The different types of brewing enzymes available in the market include:

The brewing enzymes are available in different forms, which are:

It has applications in industries such as:

The report also covers the regional markets for brewing enzymes like North America, Europe, the Asia Pacific, Latin America, and the Middle East and Africa. 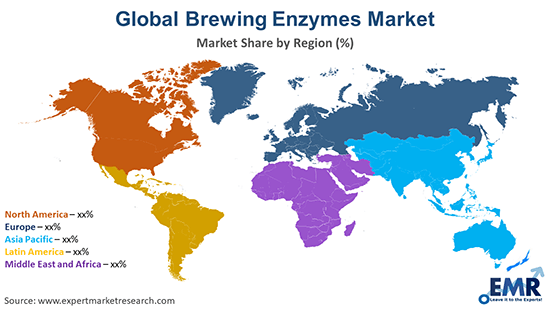 The global market for brewing enzymes is being driven by its growing demand in the brewing industry and rise in the consumption of beer with rising global population. These enzymes speed up the chemical reaction involved in the brewing process, further allowing to achieve improved product quality without a change in its structure. Thus, commercial enzymes are used by manufacturers in order to make the brewing process faster, easier, and more consistent. Also, manufacturers are increasingly focusing on commercial enzymes to enhance the productivity, and for the use of raw material alternatives to malt in the brewing process. These enzymes can help enhance the beer quality with unmalted barley.

Among its various applications, the demand for brewing enzymes in beer production is anticipated to increase significantly in the forecast period owing to the increased popularity of beer, especially among young consumers. Further, rapid technological innovations and the increased demand for craft beer, coupled with a number of new microbreweries facilities, are expected to aid the industry in the future.

In the European region, the growing production of wine, flavoured beers, and gluten-free beers, coupled with the rising demand for premium and luxury products, is driving the demand for brewing enzymes. While in developing regions such as the Asia Pacific, the factors like rising disposable incomes, acceptance of new technology, a shift in cultural patterns, and rising demand for quality beer and wine products, are expected to have a positive impact on the growth of the brewing enzymes industry in the region, thus, aiding the overall market growth.

The report gives a detailed analysis of the following key players in the global brewing enzymes market, covering their competitive landscape, capacity, and latest developments like mergers, acquisitions, and investments, expansions of capacity, and plant turnarounds:

The major drivers of the market include the rise in disposable incomes among consumers, rising global population, rapid technological innovations, increased demand for craft beer, new microbreweries facilities, rising demand for premium and luxury products, a shift in cultural patterns, and rising demand for quality beer and wine products.

What are the key industry trends of the global brewing enzymes market?

The increasing consumption of beers globally and growing demand in the brewing industry are the key industry trends propelling the market's growth.

What are the major regional markets of brewing enzymes, according to the EMR report?

The major regions in the industry are North America, Latin America, the Middle East and Africa, Europe, and the Asia Pacific with Asia Pacific accounting for the largest share in the market.

What are the various sources of brewing enzymes?

The various sources of brewing enzymes are plants and microbial, among others.

What is the dominant type of brewing enzyme in the market?

Amylase is the dominant type of brewing enzyme in the market.

In what forms are brewing enzymes available?

The brewing enzymes are available in dry and liquid form.

It has applications in industries such as wine and beer, among others.

The global brewing enzymes market has been driven by the increasing consumption of beers globally in the historical period. Aided by rising global population and rising demand for quality beer and wine products, the market is expected to witness further growth in the forecast period of 2023-2028, growing at a CAGR of 6%.

EMR's meticulous research methodology delves deep into the market, covering the macro and micro aspects of the industry. The various sources of brewing enzymes are plants and microbial, among others. Amylase is the dominant type of brewing enzyme in the market. The brewing enzymes are available in dry and liquid form. It has applications in industries such as wine and beer, among others. The major regional markets for brewing enzymes market are North America, Europe, the Asia Pacific, Latin America, and the Middle East and Africa with Asia Pacific accounting for the largest share in the market. The major players in the industry are DuPont de Nemours, Inc., Novozymes A/S, Koninklijke DSM N.V., Kerry Inc., and Amano Enzyme Inc, among others.