Castor oil is a pale-yellow liquid extracted from the seeds of castor oil plant- Ricinus Communis. It is a valuable chemical feedstock that finds applications in many industries like cosmetics, surface coatings, toiletries, pharmaceuticals, perfumes, soaps, medicines, etc. It is also used in the food processing industry either as an additive for flavouring or as a mould inhibitor. During 2015-2019, the global castor oil market grew at a CAGR of around 4%. The market is currently being driven by the increasing demand of castor oil in various industrial applications such as paints, soaps, lubricants, biofuels, etc.  This report by Expert Market Research, entitled “Castor Oil Market Report and Forecast 2020 - 2025”, provides a comprehensive analysis for anyone who plans to foray into the castor oil market. 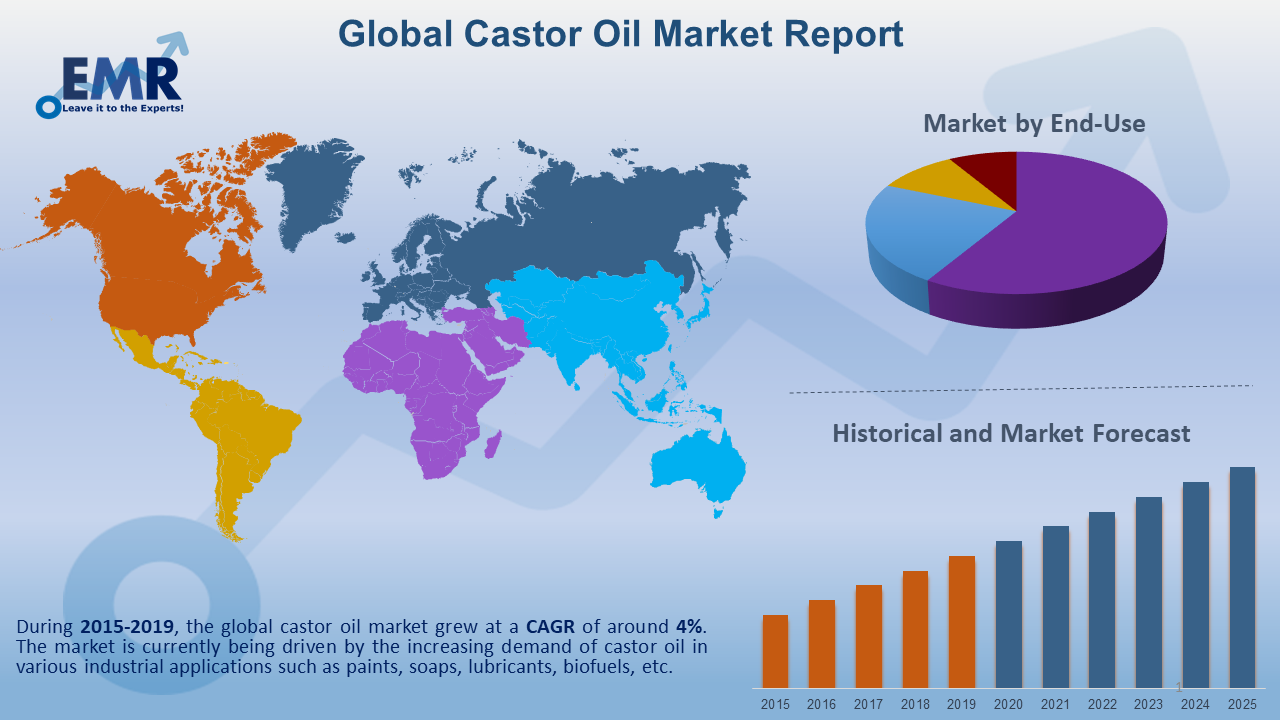 Historical market trends for the castor oil industry have been provided from 2015-2019 and forecasts have been presented till 2025. On a regional level, the report has segmented the global castor oil market into the following major regions – North America, Europe, Asia Pacific, Latin America, Middle East and Africa . Among these regions, China currently represents the largest market. Additionally, the report has analysed the global castor oil market on the basis of its end use. The paint industry represented the biggest end use market followed by the soap industry and the lubricant industry.

The value chain analysis of castor oil has also been covered in this report encompassing all the activities in the value chain such as procurement, manufacturing, sales and distribution.  Furthermore, the study assesses the market based on Porter’s five forces model, which evaluates the level of competition in the market by analysing factors such as bargaining power of buyers and suppliers, threat from substitutes and new entrants. A thorough evaluation of the competitive landscape of the castor oil industry has also been provided. Some of the key players in this market include – Adani Wilmar, Jayant Agro, Gokul Overseas and Kandla Agro & Chemicals.

The global coriander oil market size is expected to grow at a CAGR of 10% in the forecast period of 2020-2025. Coriander oil has many beneficial properties, thus, improving end-user adoption. Coriande...

The global peanut oil market is expected to grow at a CAGR of 5% in the forecast period of 2020-2025. Peanut oil has an elevated smoke point compared to other cooking oils and is used for frying food....

The Latin America vegetable oil market is aided by the rising production of oilseed in countries like Argentina and Brazil. By 2027, Argentina is expected to account for about 11% of the global oilsee...