Global Ethnic Foods Market to Grow at a CAGR of 12% During 2021-2026, Aided by Rising Cross Cultural Eating Habits 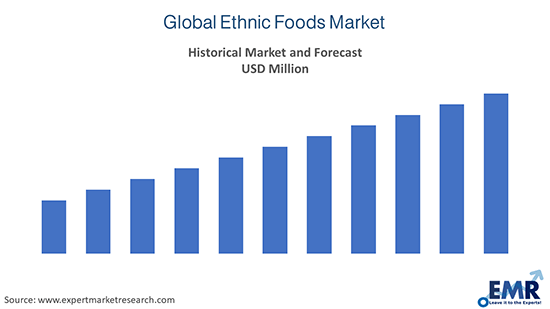 The Asia Pacific region is anticipated to have the fastest growth rate in the ethnic food industry because of the increasing population and urbanization. The young generation has increasing disposable income and has to immigrate for better employment opportunities. This leads to a surge in the demand for their ethnic food cuisines. The westernization in nations such as India is changing the food habits of customers with many looking for different tastes. North America is also experiencing a substantial growth because of the strong demand for ethnic products like Asian sauce. The United States has witnessed a rise in the Asian population and many Asian cuisines such as Thai and Indians have captured the tastebuds of people.

Ethnic food is the term generally used for food where the ingredients or cooking techniques are based on different nation’s culture. The ethnic food is sourced from a particular group of people which later reached the plates of society outside the one where the particular traditional food originated. Thai sauce will hence be an ethnic food in the United States. 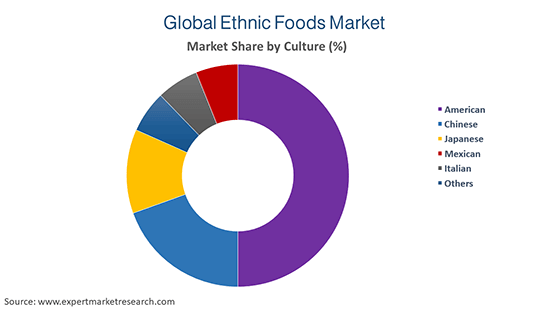 Based on the culture, ethnic foods are classified into:

On the basis of type, the industry is segmented into:

Based on the distribution channel, the market is segmented into:

The stores are further segmented into hypermarkets/supermarkets, convenience stores, and online stores, among others.

The regional markets for ethnic foods industry can be divided into North America, Europe, the Asia Pacific, Latin America, and the Middle East and Africa. 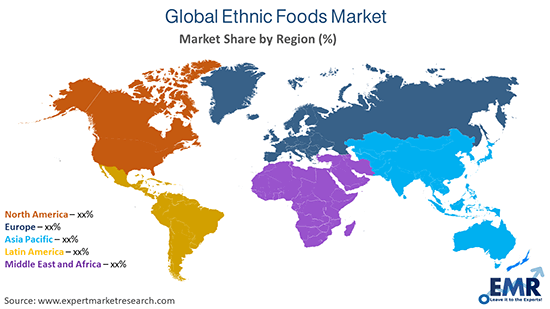 Globalization has brought the world closer. The increasing global employment opportunities have led to rising immigration across the world. The ethnic food market has capitalised on the huge demand generated by these immigrants who are looking for their local specialty. The social media has allowed consumers to share their different personal experiences. The trend of sharing the exotic food has augmented the demand for ethnic foods. The westernization has also changed the food experience of developing regions. People have started searching for new and innovative cuisines. This is providing impetus to the growth of ethnic foods industry.

The report gives a detailed analysis of the following key players in the ethnic foods market, covering their competitive landscape, capacity, and latest developments like mergers, acquisitions, and investments, expansions of capacity, and plant turnarounds:

What is the growth rate of the global ethnic foods market?

The major drivers of the market include westernisation, increasing population and urbanisation, new and innovative cuisines, increasing disposable income, and changing food habits of customers.

What are the key industry trends of the global ethnic foods market?

What are the major regional markets of ethnic foods, according to the EMR report?

What are the segments based on culture in the market?

Based on the culture, ethnic foods are classified into American, Chinese, Japanese, Mexican, and Italian, among others.

What are the types of ethnic foods in the market?

Food service and ready-to-eat are the types of ethnic foods in the market.

Restaurants and stores are the several distribution channels of the market. The stores are further segmented into hypermarkets/supermarkets, convenience stores, and online stores, among others.

The global ethnic foods market was driven by the rising immigration in the historical period. Aided by increasing population and urbanisation, and new and innovative cuisines, the market is expected to witness further growth in the forecast period of 2022-2027, growing at a CAGR of 12%.

EMR's meticulous research methodology delves deep into the market, covering the macro and micro aspects of the industry. Based on the culture, ethnic foods are classified into American, Chinese, Japanese, Mexican, and Italian, among others. Food service and ready-to-eat are the types of ethnic foods in the market. Restaurants and stores are the several distribution channels of the market. The stores are further segmented into hypermarkets/supermarkets, convenience stores, and online stores, among others. The major regional markets for ethnic foods are North America, Europe, the Asia Pacific, Latin America, and the Middle East and Africa. The major players in the industry are Ajinomoto Co. Inc., McCormick & Company, Incorporated, Associated British Foods PLC, General Mills, Inc., and Paulig Group, among others.