Europe Food Fortification Premix Market to be Driven by the Expected Global Market Growth at a CAGR of 8.5% between 2022-2027

The Europe food fortification premix market is aided by the rising demand for nutritionally enriched food in the sports nutrition, processed food, and beverages sectors, among others. 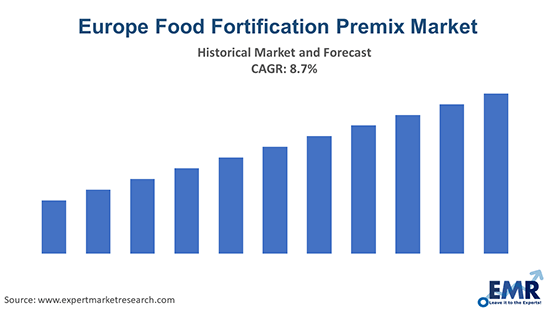 Europe is a leading region for food fortification premix, falling just behind the Americas. The Europe food fortification premix market currently occupies a 29% share in the global market. Switzerland is aiding the market growth with nearly 250 food products fortified voluntarily with folic acid. While the current Europe market for food fortification premix is being driven by the increase in the demand for nutritionally enriched food, it is also being aided by the mandatory fortification of wheat in European countries like the United Kingdom and Ireland.  Wheat flour has been fortified with iron and other essential nutrients in the UK since the 1940s. The proposed plans to include folic acid as a fortificant to wheat flour in the country will further aid the market in the region. 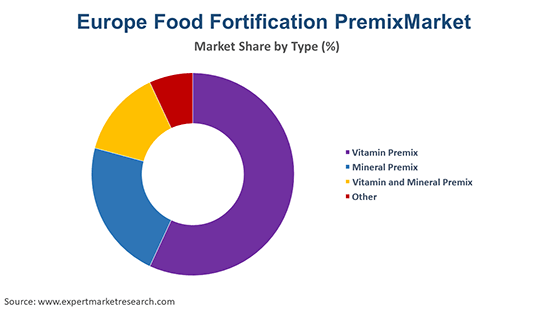 By type, the premixes are categorised as:

By form, they are categorised as:

The EMR report provides an overview of the market globally while giving an in-depth insight into the Europe food fortification premix market. 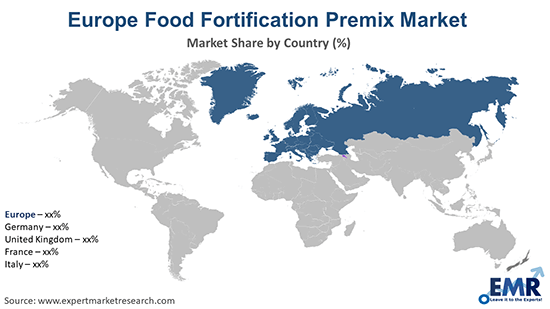 The sports nutrition sector is seeing a robust growth in the region due to a growing awareness among the consumers about the beneficial effects of protein consumption like increased energy, muscle mass, and strength. This growth in the sports nutrition sector is propelling the growth of the food fortification premix market in Europe. The baked good industry is another significant sector for the premix market. With an increased focus on health and an aging population, consumers are looking for healthier and value-added baked goods like biscuits, cupcakes, cakes, and pancakes enriched with diverse nutrients which are helping the growth of the premix market.

Functional water like vitamin water is also seeing a rising demand in Europe fuelled by the increasing health concerns about obesity and diabetes, and thus, further augmenting the growth of the food fortification premix market in the region. Germany is a significant market for functional beverages in the area with over a hundred manufacturers offering drinks containing vitamin A, E and C. Germany along with the United Kingdom and Spain are the leading markets for food fortification premix in Europe.

The report analyses the following key players in the Europe food fortification premix market, looking into their market share, capacity, and latest developments like mergers and acquisitions, capacity expansions, and plant turnarounds:

EMR’s comprehensive report gives an in-depth analysis of the market, including a SWOT analysis as well as an analysis of Porter’s five forces.

What is the growth rate of the Europe food fortification premix market?

The Europe food fortification premix market is projected to be driven by the global industry, which is likely to be driven at a CAGR of 8.5% between 2021 and 2026.

The global food fortification premix market is estimated to reach a volume of 65 kilo metric tons by 2026.

The major drivers of the industry, such as rising disposable incomes, increasing population, growing standards of living, and changing lifestyles, are aiding the market growth.

The sports nutrition sector is witnessing a robust growth in the region due to the growing awareness among the consumers about the beneficial effects of protein consumption is expected to be a key trend guiding the growth of the industry.

What are the major types of food fortification premix in the industry?

What are the leading forms of food fortification premix in the industry?

The leading forms of food fortification premix include powder and liquid.

What are the significant application sectors in the industry?

The Europe food fortification premix market is being driven by the rising demand for nutritionally enriched food in the sports nutrition, processed food, and beverages sectors, among others. The market in Europe is being driven by the healthy growth of the global market, which is projected to reach 65 kilo metric tons by 2026, growing at a CAGR of 8.5% between 2021 and 2026.

EMR’s meticulous research methodology delves deep into the industry, covering the macro and micro aspects of the industry. Based on types, the market can be segmented into vitamin premix, mineral premix, and vitamin and mineral premix, among others. By form, the industry can be segmented into powder and liquid. On the basis of application, the industry is divided into sports nutrition and dietary supplements, infant and early nutrition, processed foods, beverages, and food staples. The key players in the above industry include Royal DSM N.V. (Fortitech Premixes), Glanbia, Plc, SternVitamin GmbH & Co. KG, Vitablend Nederland B.V., Prinova Europe Limited, Corbion Group Netherlands B.V., Barentz B.V., and Jubilant Life Sciences.