By 2026, the industry is estimated to attain a value of nearly USD 4 billion. In terms of market share by value, North America is the leading food emulsifiers market, accounting for almost 30% of the global market share, followed by Europe, the Asia Pacific, and others. Synthetic emulsifiers are the major class of food emulsifiers. The dominant type of emulsifier, controlling a significant share of the industry, includes mono, di-glycerides, and derivatives. The industry is significantly driven by the growing bakery and confectionery market, which is the major application sector for food emulsifiers. These emulsifiers are used as substitutes for enzymes due to changing consumer preferences. Other major factors driving the demand for the product in the overall food and beverage segment is the growing convenient and premium food industry. 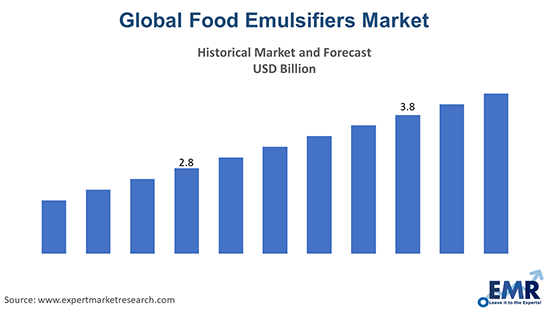 The Asia Pacific is the fastest-growing region in the industry, driven by the growing demand from countries like China, India, Malaysia, Indonesia, and Vietnam. The demand growth in the region is primarily due to the increasing use of lecithin in manufacturing animal feed and pharmaceuticals, among others. Di-glycerides are also witnessing a rising demand in the region. The region is growing at a rapid rate, and it is likely to surpass the demand growth of Europe in the coming years due to favourable factors like economic growth and rising disposable income.

Food emulsifiers are the most common additives used to improve the consistency of food products, especially baked foods. It enhances the quality of batters by conditioning the dough, which in turn increases the ability of the batter to be whipped. They are widely used in the production of pasta to make it resistant to overheating and overcooking. These emulsifiers are being used to facilitate the production of food and to help retain consistency and freshness. For low fat spreads, food emulsifiers can help prevent the growth of moulds that would occur if oil and fat were to be separated. Based on class, food emulsifiers are divided into synthetic and natural. 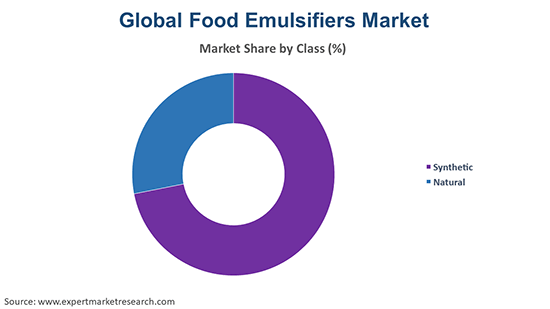 On the basis of types, the industry can be segmented into:

Food emulsifiers have wide applications in the following segments: 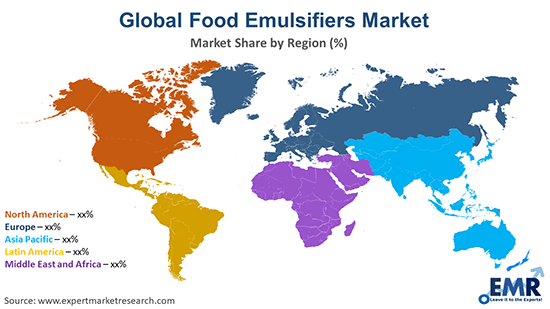 The global food emulsifiers industry is majorly driven by the food industry, especially the bakery and confectionary industry, which is rapidly growing owing to the increased demand for convenience and premium food among consumers. The rising frozen, chilled, and packaged food segments are also driving the industry growth as food emulsifiers are used within these products to prolong their shelf life. The increasing innovations in the industry, helping confer enhanced stability, volume, organoleptic properties, and extended shelf life capabilities to the product are expected to aid the growth of the market in the coming years.

The demand growth owes to the growing awareness among consumers about the health benefits of food emulsifiers as they are increasingly preferring emulsifiers over trans-fat. The industry is also being aided by the growing shift among producers towards non-PHO derived emulsifiers as they are devoid of the harmful trans-fat. With the consumers increasingly demanding natural and clean ingredients for their food, the industry is being further propelled forward.

Lecithin, a natural emulsifier, is the most popular type among consumers. The demand for lecithin is majorly concentrated in the Asia Pacific region, one of the fastest-growing markets for food emulsifiers. The rapidly growing economies and the rising disposable incomes of the consumers in the region are providing an impetus to the industry growth. Lecithin is also widely used in the production of animal feed, which itself is a growing market. The rapidly growing pharmaceutical industry is also supporting the industry growth.

The report gives a detailed analysis of the following key players in the global food emulsifiers market, covering their competitive landscape, capacities, and latest developments like mergers, acquisitions, and investments, expansions of capacity, and plant turnarounds:

What was the global food emulsifiers market size in 2020?

In 2020, the global food emulsifiers market attained a value of nearly USD 3 billion.

The market is estimated to witness a healthy growth in the forecast period of 2023-2028 to reach about USD 4 billion by 2026.

The major drivers of the industry, such as rising disposable incomes, growing bakery and confectionery market, growing convenient and premium food industry, and increasing innovations in the industry, are expected to aid the market growth.

What are the key industry trends of the global food emulsifiers market?

The key market trend guiding the growth of the food emulsifiers market includes the growing shift among producers towards non-PHO derived emulsifiers as they are devoid of the harmful trans-fat.

What are the major class segments of food emulsifiers in the market?

Natural and synthetic segments are the major class segments of the product in the industry.

What are the significant types of food emulsifiers in the industry?

Glycerides, lecithin, sorbitan esters, and steroyl lactates, among others, are the significant types of food emulsifiers in the industry.

What are the major application segments of the product in the market?

Bakery and confectionery, dairy, culinary and meat, and oils and fats, among others, are the major application segments of the product in the market.

The global food emulsifiers market attained a value of USD 3 billion in 2020, driven by rising bakery and confectionery market. Aided by the rising innovations in the industry, the market is expected to witness a further growth in the forecast period of 2023-2028, growing at a CAGR of 5.5%. The market is projected to reach USD 4 billion by 2025.

EMR’s meticulous research methodology delves deep into the market, covering the macro and micro aspects of the industry. Based on its class, the market can be bifurcated into natural and synthetic. On the basis of types, the industry is divided into glycerides, lecithin, sorbitan esters, steroyl lactates, and others. By application, the industry is segmented into bakery and confectionery, dairy, culinary and meat, oils and fats, and others. The major regional markets for the product are North America, Europe, the Asia Pacific, Latin America, and the Middle East and Africa, with North America accounting for the leading share of the market. The key players in the above market include International Flavors & Fragrances Inc., Riken Vitamin Co., Ltd., Cargill, Incorporated, Estelle Chemicals Pvt. Ltd., and Lasenor Emul, S.L., among others.