The global food safety testing market attained a value of nearly USD 19 billion in 2019. The market is expected to grow further during the forecast period of 2020-2025 at an estimated year-on-year rate of 8%. The industry is projected to attain a value of USD 31 billion by 2025. 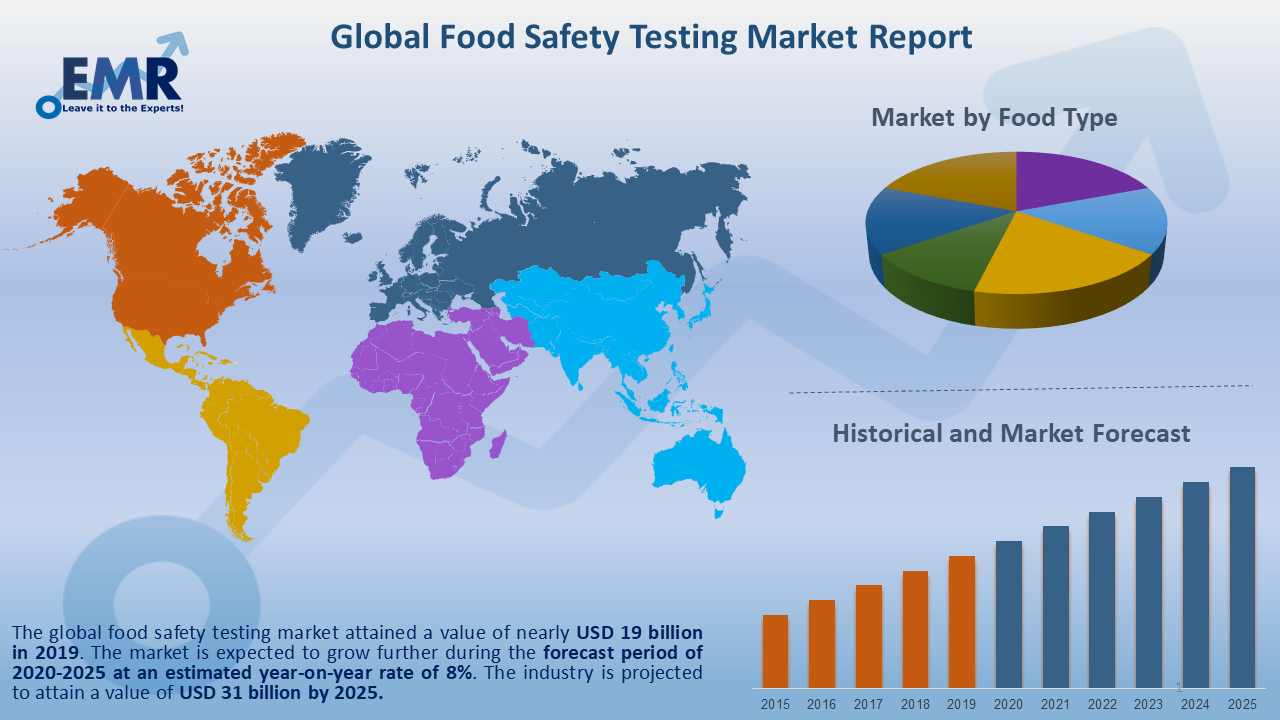 North America is one of the leading regional markets for food safety testing. The frequent cases of food poisoning and foodborne diseases in the region are supporting the industry growth. Salmonella, campylobacter, E. coli, and listeria are the common pathogens that cause foodborne diseases. While salmonella can infect vegetables, chicken, eggs, beef, and pork, campylobacter is commonly spread through chicken. According to the Center of Disease Control and Prevention (CDC), nearly 48 million people in the US are affected by food poisoning every year, with 128,000 of those affected requiring hospitalizations and 3000 succumbing to foodborne diseases in the US each year. Thus, with the rising frequency of food-related diseases in the region, consumers are increasingly demanding food safety accountability. The growing demand for greater food safety and the implementation of government regulations like the FDA Food Safety Modernization Act (FSMA) is aiding the growth of the food safety testing market in North America.

Europe is also a significant region in the food safety testing industry. The regional market is being driven by the thriving food and beverage industry on the continent and the rising number of food regulations by various governments and the EU. Germany, the United Kingdom, and France are the major markets for food safety testing. The market is being driven by the rising demand for food safety accountability by consumers in the region due to multiple food related scandals like the 2013 horse meat scandal and the 2017 chicken safety scandal. Major food and beverage companies and providers are also aiding the growth of the food safety testing industry as they seek to acquire multiple food safety accreditations to enhance their reputability and adhere to regional safety regulations.

Food safety testing verifies whether the food is free from harmful chemicals, pathogens, allergens, and other contaminants. It also tests whether the food packaging is ensuring the safety and freshness of the product. The various food testing methods in the industry are:

North America, Europe, Latin America, the Middle East and Africa, and the Asia Pacific are the major regional markets for food safety testing.

The global food safety testing market is being driven by the rising concerns about food safety and increasing calls of food safety accountability. According to the World Health Organisation, unsafe food can cause over 200 diseases, which can range from diarrhoea to cancers. Nearly 600 million people are affected by contaminated food each year, with almost 420 000 dying as a result of consuming contaminated food. While foodborne diseases are caused by pathogens like viruses, bacteria, and parasites, the intrusion of unwanted chemical substances in food and beverage products can also be responsible for foodborne diseases. Thus, multiple regulations and accreditations like FDA Food Safety Modernization Act (FSMA), Chartered Institute of Environmental Health (CIEH), and Food Safety System Certification 22000 (FSSC 22000) are encouraging companies and retailers to adopt stringent food safety testing standards. With rising cases of food fraud, multiple regulations are being implemented across the world.

The industry is being driven by the rising food and beverage industry globally. The rising middle-class population, busier lifestyles, and increasing disposable incomes are driving the growth of the processed and packaged food industries. With the rising consumption of processed and packaged food and beverages, the need for food safety testing has increased, thus, aiding the growth of the food safety testing market. While the testing of contaminants like salmonella is most common, the players in the industry are also increasingly testing for the presence of allergens, and GMO ingredients as consumers are becoming more aware about food hygiene and safety. With the food supply chain becoming more expansive, regulations are being implemented to ensure food safety across the supply chain, thus, ensuring the growth of the industry. The rising technological innovations are also driving the industry growth.

The global chocolate industry is being driven by the changing consumer lifestyle and inflating disposable incomes in the emerging economies. North America is a leading region for the industry, along w...

The global nisin market size was estimated at around USD 300 million in 2019. The nisin market is further expected to grow at a CAGR of 5.4% in the forecast period of 2020-2025. Food spoilage preventi...