Germany Dairy Market Driven by the 0.7% Growth in European Milk Output in 2020

The Germany dairy market was driven by its robust production of dairy products especially milk. Germany and other Scandinavian countries are expected to drive the growth of Europe market. 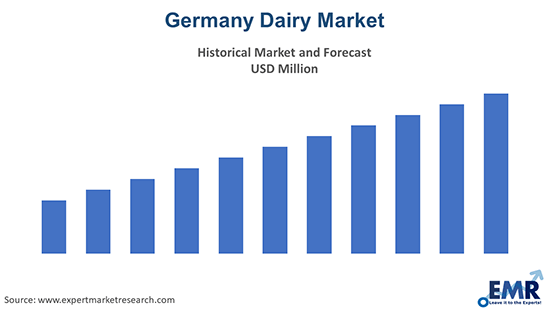 In 2017, 31.9 billion litres of cow’s milk was produced in Germany. It was the leading dairy market in Europe in 2017. The Germany dairy market is expected to continue growing in the forecast period of 2021-2026, aided by the growth in the Europe milk production which is expected to increase annually by 0.7%.  The same year, Germany also contributed to over one-fifth of the total EU milk deliveries. In June 2017, the milk deliveries by Germany increased after a dip in 2016, with Bavaria, Lower Saxony and North Rhine- Westphalia delivering almost 17.8 million tons to dairy firms in 2017. Bavaria, Lower Saxony, and North Rhine-Westphalia are the largest milk producers in Germany, accounting for over half of Germany’s total milk supply in 2017.

The European Union is one of the largest milk producers in the global market. The EU dairy market will see a moderate growth in the coming years, supported by the rising domestic demand for products like cheese, butter, and cream, among others. Between 2016 and 2017, the EU collected 378,000 tonnes of SMP as a public intervention stock which accounted for almost 6.5% of the global production of SMP and one-fifth of the global SMP trade.

While its share in the global market is expected to witness a slight decline with the decrease in its milk production, the EU is expected to retain its position as a key exporter of the processed dairy products. The region will also remain the leading producer and exporter of cheese, whose increased production will be aided by the rise in dairy trade between the EU and Canada as a result of the CETA agreement.

Dairy and its products include various types of milk like whole milk, semi-skimmed milk, and skimmed milk along with products derived from milk like butter, cheese, yoghurt, and ice cream, among others. They make up an essential part of the daily balanced diet. They are a rich source of nutrients like vitamin A and B vitamins like thiamine, riboflavin, and nicotinic acid, calcium, Vitamin B 12, proteins, and other minerals. Milk, yoghurt, and cheese are the leading sources of calcium. 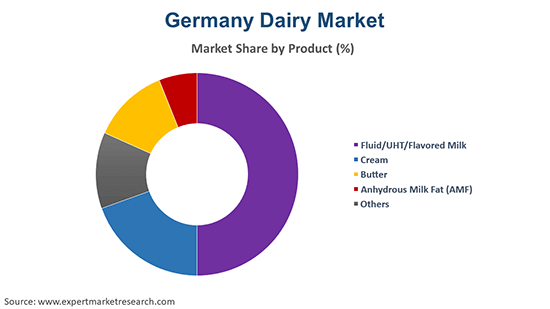 The various products available in the German market are:

Dairy and its products find their leading application in the food and beverage sector. In Germany, it made up the largest segment in the industry following meat and meat products in 2017. It also contributes to the other segments of the industry like baked goods and confectionary. In Germany, milk products like soft cheese, flavoured milk and yoghurt are seeing increasing preference due to a rising focus on health. 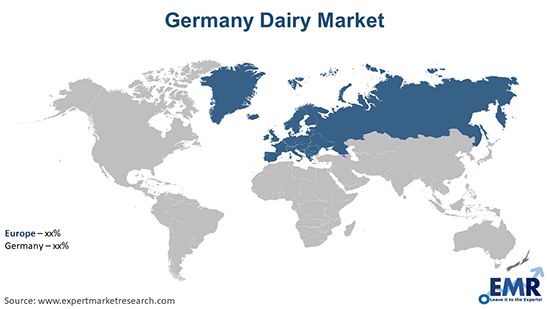 In Germany, unprocessed cheese is expected to overtake processed cheese due to a growing shift among the consumers for more healthy alternatives. The rising market for unprocessed cheese is driven by consumers’ preference for cheese over other relatively unhealthy alternatives. German consumers have been reducing their meat consumption over the years. This behaviour is expected to drive the demand for cheese and other dairy-based protein-rich foods. The demand for cheese, especially soft cheese, is growing among the German consumers who are increasingly using soft barbecue cheese as alternatives to meat and sausages. Similarly, flavoured milk is also seeing a rising preference as an easy substitute for soft drinks.

Amidst growing health concerns, low sugar and organic yoghurts are experiencing a healthy growth. Greek yoghurt remained popular among the consumers due to its high nutritious value. Sour milk products saw a rise in consumption in the last few years due to a shift towards healthy drinks which are not high in calories. Other products such as chilled dairy desserts and snacks saw robust growth in 2018.

In 2018, prices of milk powder saw an increase in the EU. However, the release of its surplus supply of SMP intervention stocks may hinder the growth of SMP prices in the European Union.

The report analyses the following key players in the Germany dairy market including their capacity, market share and latest developments in the competitive landscape like capacity expansions, plant turnarounds, and mergers and acquisition:

What is the growth rate of the Germany dairy market?

The Germany dairy market is projected to be aided by the growing Europe milk production which is expected to increase annually by 0.7% in the forecast period of 2021-2026.

What are the key industry trends of the Germany dairy market?

The shift among the consumers towards healthier alternatives to red meat and poultry is expected to be a key trend guiding the growth of the dairy market in Germany.

North Rhine-Westphalia, Bavaria, and Baden-Württemberg, among others, are the leading regions in the market.

The Australia and New Zealand cheese market attained a volume of 739 thousand tons in 2020, driven by the growing consumption of cheese in food service industry and growing retail sector. Aided by the...
Read More