On the basis of drug class, the nucleoside reverse transcriptase inhibitors segment accounted for the majority of the market share in 2020. Based on the distribution channel, the hospital pharmacies segment dominated the global HIV drugs market in 2020 and is estimated to retain its dominance over the forecast period of 2021-2026.

Regionally, North America is expected to hold the largest market share in 2020. The regional growth is attributed to the increased number of research and development initiatives for new drug launches, a well-established healthcare system, and the growing adoption of advanced treatment options from HIV infected population. However, the majority of people with HIV are encountered in low as well as middle-income countries. In 2018, there were 20.6 million people with HIV (57%) in eastern and southern Africa, owing to this, the Middle East and Africa is anticipated to register the highest CAGR over the forecast period.

Human Immunodeficiency Virus (HIV) is a virus that causes a chronic and life-threatening disease that can be transferred from one person to another through blood-to-blood and sexual contact. It damages the immune system by destroying CD-4 cells, making the body susceptible to infections and other diseases. The rising prevalence of HIV disease across the world has positively impacted the demand for HIV drugs. These drugs prevent the multiplication of HIV and make the immune system strong enough to resist certain infections, thereby reducing the risk of transmission.

At present, highly active antiretroviral therapy (HAART) is the most prescribed treatment. It has various combinations of one protease inhibitor and other drugs. These combinations aids in increasing the number of CD4+ cells and decreasing the amount of virus in the blood.

On the basis of drug class, the global HIV drugs market is segmented into:

Based on the distribution channel, the industry can be segregated into:

The EMR report looks into the regional markets in the global HIV drugs market like North America, the Asia Pacific, Europe, Latin America, and the Middle East and Africa. 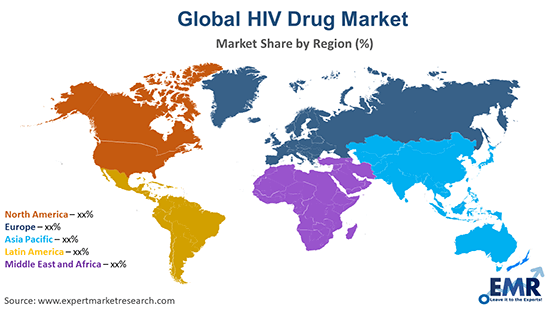 According to the estimates by the World Health Organization (WHO), 37.9 million people are living with HIV, and nearly 2 million people become newly infected at the end of 2018. The growing population density of HIV infected people has been instrumental in the development and introduction of HIV drugs. Besides, the market is also influenced by the rising government initiatives and campaigns to create awareness amongst people regarding the causes, symptoms, and treatments of HIV. Moreover, the introduction of generic drugs acts is another factor that is contributing to the demand for HIV drugs, as they are cost-effective and chemically identical to branded drugs.

Additionally, many international organizations are providing funds to research institutes funds for R&D activities to develop innovative, affordable, safe, and efficient medicines for effective therapeutic solutions. Owing to the aforementioned factors, the demand for HIV drugs is expected to augment over the forecast period. However, the cost of antiretroviral drugs is relatively high, and patients without healthcare coverage find it extremely difficult to pay, which is likely to restrain the market growth up to some extent, contributing to its negative growth rate. The side effects of these drugs is also preventing the growth of the market with many of the patients giving up the medications due to these harsh side effects, which can include hyperlipidemia, osteopenia, lipodystrophy, and osteoporosis The market is also expected to decline in the forecast period due to the rising awareness about how to prevent the spread of the disease and the upcoming patent expirations.

The report presents a detailed analysis of the following key players in the global HIV drugs market, looking into their capacity, market shares, and latest developments like capacity expansions, plant turnarounds, and mergers and acquisitions:

What was the global HIV drugs market size in 2020?

In 2020, the global HIV drugs market attained a value of nearly USD 24.3 billion.

What are the major industry constraints?

The market growth is being constrained by the high cost of the treatment and the side effects of the drugs, along with the upcoming threat of patent expirations and the growing awareness about how to effectively curb the spread of the disease.

What are the key industry trends of the global HIV drugs market?

What are the major regional markets of HIV drugs, according to the EMR report?

What is the dominant drug class of HIV drugs in the industry?

Nucleoside reverse transcriptase inhibitors are the leading drug class of HIV drugs in the industry.

What is the leading distribution channel of HIV drugs?

The distribution channel segment is led by hospital pharmacies.

The global HIV drugs market attained a value of USD 24.3 billion in 2020, driven by a growing population density of HIV infected people. Due to the high cost of antiretroviral drugs and rising awareness, the market is expected to witness a decline in the forecast period of 2021-2026, declining at a CAGR of 2.4%. The HIV drugs market is projected to reach USD 22.1 billion by 2026.

EMR’s meticulous research methodology delves deep into the market, covering the macro and micro aspects of the industry. Based on its drug class, nucleoside reverse transcriptase inhibitors are the leading segment. On the basis of distribution channels, the hospital pharmacies sector accounts for the leading share in the industry. The major regional markets for HIV drugs are North America, Europe, the Asia Pacific, Latin America, and the Middle East and Africa, with North America accounting for the largest share of the market. The key players in the above market include Boehringer Ingelheim International GmbH, ViiV Healthcare, Merck & Co., Inc., F. Hoffmann-La Roche Ltd., Gilead Sciences, Inc., Cipla Inc., Johnson & Johnson Services, Inc., and others.