Hydroxypropyl methylcellulose is a semisynthetic, inert and viscoelastic polymer. It is used as an excipient and a controlled-delivery component in oral medicaments, and as an ophthalmic lubricant. The chemical formula of HPMC is C56H108O30 and it is produced on an industrial level by treating cellulose, propylene and methylene with sodium hydroxide by the process of alkalization and etherification. HPMC has well-diversified applications across various sectors. It is used in pharmaceuticals, ceramics, adhesives, paints & coatings, buildings and personal care products. It is used in construction materials as a tile binder, water retention agent and rheology modifier. It also serves as an alternative to gelatin because of its physical similarities to gelatin and its vegetarian source. It can also be used as a substitute to gluten. In the pharmaceutical sector, it is used in supplement capsules, coatings; as a drug carrier, emulsifier and tablet binders. On the industrial level, it is used in inks, in printing and dyeing of textiles and in paper making. During 2015-2019, the global HPMC market grew at a CAGR of around 6.6%. The consumption of HPMC is driven by the construction and pharmaceutical sector which account for the majority of its consumption. The report by Expert Market Research entitled “HPMC Market Report and Forecast 2020-2025” provides a comprehensive analysis for anyone who plans to foray into the HPMC market. 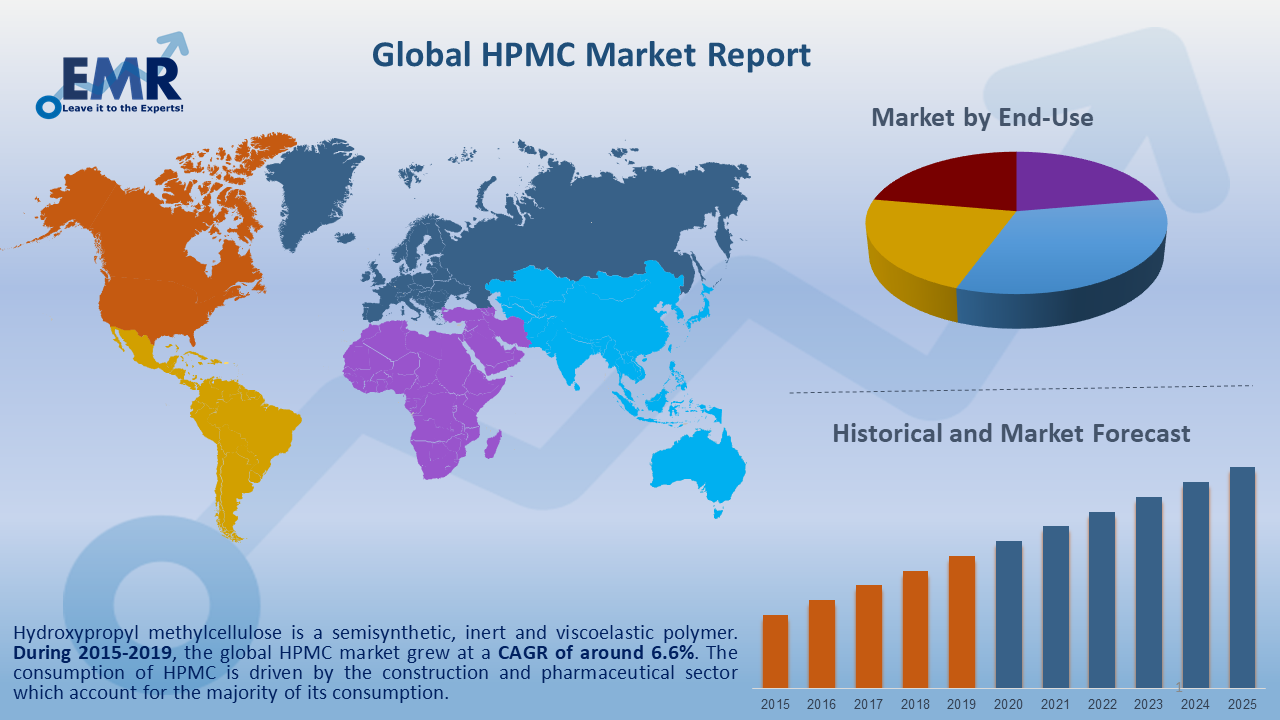 Historical market trends for the HPMC industry have been provided from 2015-2019 and forecasts have been presented till 2025. On a regional level, the report has segmented the global HPMC market into the following regions - China, Western Europe, Other Asia, United States, Central/Eastern Europe, Middle East and South America. China currently represents the largest market. On the basis of end-use, the global HPMC market has been segmented into Construction, Pharmaceutical (including cosmetics), Food and other industries. Construction and Pharmaceutical currently represent the biggest end-use markets for HPMC.

The value chain analysis of HPMC has also been covered in this report encompassing all the activities in the value chain such as procurement, manufacturing, sales and distribution. Furthermore, the study assesses the market based on Porter’s five forces model, which evaluates the level of competition in the market by analysing factors such as bargaining power of buyers and suppliers, threat from substitutes and new entrants. A thorough evaluation of the competitive landscape of the HPMC industry has also been provided. The report also covers the global import and export trends of HPMC with Belgium being the largest importer and Germany being the largest exporter.

This report provides an exhaustive insight into the manufacturing of HPMC. Factors such as chemical reactions involved, process flow, raw material requirements, mass balance and various manufacturing steps have been thoroughly discussed in the report. The report also provides a comprehensive market evaluation of the major feedstocks required for manufacturing HPMC viz. cellulose, propylene, methyl chloride and sodium hydroxide. For each feedstock, the report provides market trends, price trends, market by application, market by region and its key manufacturers.

The global sustained release coatings market stood at a value of nearly USD 475 million in 2019. The industry is projected to grow at a CAGR of 6.4% over the forecast period of 2020-2025 to attain USD...

The global oleochemicals market is being aided by the growth of fatty alcohol and fatty acids markets. The fatty alcohols industry attained a production volume of 3.6 million metric tons in 2019. The ...