Indian Exotic Flowers Market to be Aided by the Expected Growth in the Indian Floriculture Market, Growing at a CAGR of 19.5% over the Forecast Period of 2022-2027.

The Indian exotic flowers market is being supported by the Indian floriculture market, which reached a value of INR 187.6 billion in 2020. The floriculture industry is further expected to grow at a CAGR of around 19.5% in the forecast period of 2022-2027 to reach a value of around INR 546.4 billion by 2026.

India’s flower industry is mainly dominated by the unorganised sector like roadside vendors, including local florists and itinerant sellers, selling almost 85% of the flowers on the road. However, the organised sector is expected to grow in the coming years due to the rise of online shops specialising in selling a wide variety of local and exotic flowers. 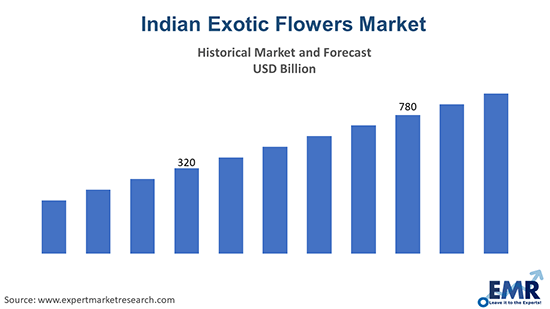 The consumption of exotic flowers is increasing in the India, with the demand increasing more in the metropolitan cities due to the growth in consumption on various occasions like birthdays, festivals, anniversaries, Valentine’s Day, and religious ceremonies, among others. The significant markets include Delhi, Bengaluru, Mumbai, Kolkata, and Hyderabad, which are the major cities in India. These areas witness an excess demand growth during festivals and wedding seasons.

The market in India is also being aided by the rising adoption and use of intricate exotic flower arrangements by the leading hotels in the country. In April 2020, Ferns N Petals, one of the leading key players in the exotic flowers market in India, announced their expansion plans. The company is planning to introduce its IPO in 2021, that is, the initial public offer. They are planning to expand their operations from solely flower businesses to FMCG and hospitality sectors. Moreover, the company is planning to establish a chain of wedding hotels.

Exotic flowers refer to those flowers, which are not native to the land; meaning they are foreign species or types introduced to a region’s ecosystem via seeds or plants. By variety, the exotic Indian flowers can be listed as lotus, hibiscus, tulips, lavender, orchids, carnations, lily, and daffodils, among others.

On the basis of types, the industry can be divided into loose flowers and cut flowers. The loose flowers are usually picked/plucked from plants without its stalk, from right below the calyx. These flowers are widely demanded in Asian countries, especially India, where they are used to make rangoli, hair ornaments, bracelets, etc. Cut exotic flowers, on the other hand, are attractive flowers in terms of colour and freshness and are used to make bouquets. They are widely demanded among consumers due to being long-lasting. 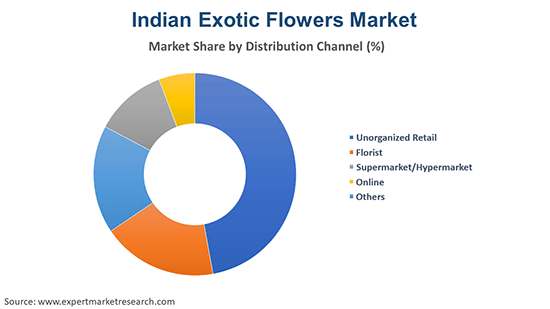 The industry can be further bifurcated into organized and unorganized sectors.

Based on the distribution channel, the industry can be divided into:

The leading regions producing loose flowers in India are: 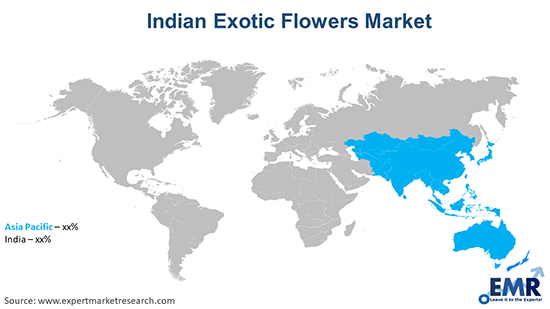 The Indian exotic flowers industry is being driven by the growing demand from the decoration industry. With rapid urbanisation and the rising demand for celebration, the demand for floral decoration is also booming among the consumers. The gifting industry in the country is also growing at a fast pace with the rapidly rising population. The growing economy of the country has led to increased disposable incomes as well as personal aspirations, driving the industry for gifting further. Indian gifting industry, including personal gifting, festival gifting, and corporate gifting, which is boosting the growth of the exotic flowers industry in India. The wedding season also boosts the demand for exotic flowers further.

The exotic flowers market growth in India is also supported by the growing exports to other countries, along with the increasing domestic demand. The rising modernization as well as the increasing trend of celebrating occasions such as anniversaries, marriages, valentine’s day, anniversaries, among others is aiding the industry growth. India exports a significant volume of exotic flowers to western countries, and the exports grow more during festivals like Christmas. The market is also being aided by the rising religious industry, where it is widely used for decorations as well as offerings. The demand from the religious industry grows particularly during festival seasons like Diwali. The industry for online gifting is also growing exponentially due to the rising nuclear family population and people increasingly shifting to metropolitan cities.

The report gives a detailed analysis of the following key players in the Indian exotic flowers market, covering their competitive landscape, capacity, and latest developments like mergers, acquisitions, and investments, expansions of capacity, and plant turnarounds:

What was the Indian exotic flowers market size in 2020?

In 2020, the Indian exotic flowers market is being supported by the Indian floriculture market, which attained a value of nearly INR 187.6 billion.

The Indian exotic flowers market is being supported by the Indian floriculture market, which is projected to grow at a CAGR of 19.5% between 2021 and 2026.

The Indian exotic flowers market is being supported by the Indian floriculture market, which is estimated to witness a healthy growth in the forecast period of 2022-2027 to reach around INR 546.4 billion by 2026.

The major drivers of the industry include rising disposable income, rapid urbanisation, rising demand for celebration, growing demand from the decoration industry, and the rising gifting industry.

What are the key industry trends of the Indian exotic flowers market?

The key market trend guiding the growth of the Indian exotic flowers market include the rising demand from the religious industry, where it is widely used for decorations and offerings.

What are the major regions of Indian exotic flowers, according to the market report?

What are the major types of Indian exotic flowers?

Loose and cut flowers are the major types of the product.

What are the significant varieties of the product?

What are the major sectors of the Indian exotic flowers market?

What are the significant distribution channels of the industry?

Unorganized retail, florist, supermarket/hypermarket, and online, among others are the significant distribution channels of the industry.

The major players in the industry are Ferns N Petals, Phoolwala, ArenaFlowers, May Flower, Elegant Floriculture & Agrotech (I) Limited, and Soex Flora, among others.

The Indian exotic flowers market is being supported by the Indian floriculture market, which reached a value of INR 187.6 billion in 2020. The floriculture industry is further expected to grow at a CAGR of around 19.5% in the forecast period of 2022-2027 to reach a value of around INR 546.4 billion by 2026.

The global amaranth market is driven by the thriving cosmetics industry owing to the rising disposable incomes, rising population, and increasing inclination towards personal care. Aided by the growin...
Read More

The global chamomile extract market is being aided by the growing chamomile industry, which is expected to grow at a CAGR of 9% in the forecast period of 2022-2027.
Read More

The global sea buckthorn market is expected to grow at a CAGR of 9% in the forecast period of 2022-2027, aided by the growing awareness about the medicinal uses of the product among the consumers.
Read More