The tea market in India is being driven by the healthy production and consumption of the beverage. In 2020, nearly 1.10 million tons of tea was consumed in the country. 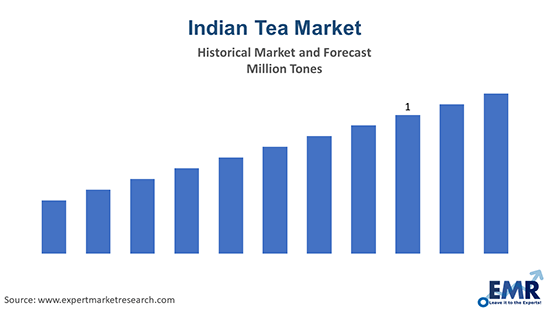 India is the second largest producer of tea, globally, after China. The country is also a leading consumer of the beverage and accounted for nearly a fifth of the global consumption in 2016. India attained the highest exports of tea in 2017 in almost four and a half decade. However, the annual growth of the exports from the country was only moderate due to the high domestic consumption. Almost 80% of the total output in India is consumed domestically. The per capita consumption of the beverage in the country has witnessed a significant increase in the last decade.

North India is the leading region for the industry in India, accounting for over three-fourths of the industry. Assam is the major tea producing state in the country followed by West Bengal. According to the place of origin, Assam and Darjeeling types are globally the most recognised types of the beverage. South India accounts for nearly a fifth of the industry with the production concentrated in the Nilgiris. While the region has a significantly lower output than North India, the industry in the region is being driven by its production of premium varieties of superior quality. By types, black tea is the largest segment in the tea industry in India. Between 2008-2017, the black variety of the beverage witnessed a moderate annual growth of 3.3%. The consumers are increasingly choosing packaged over unpackaged varieties, due to the perceived superior quality of packed tea. Currently, nearly 80% of the households in urban India and almost 75% of the households in rural India prefer buying its packaged product types.

Tea is usually made by the infusion of dried and crushed leaves of the tea plant in boiling water. Its most common types are: 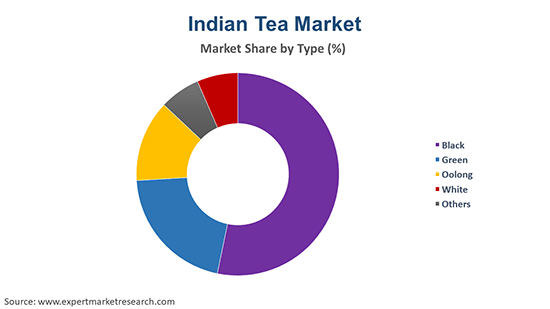 It is either available in loose packaging or in bags. It can also be packaged in plastic containers, paper boards, and aluminium tin. The major distribution channels for the product are supermarkets/hypermarkets, speciality stores, convenience stores, and online retailers, among others. Its applications sectors are widely bifurcated into residential and commercial. By processing, it can be bifurcated into CTC and orthodox (traditional). The report also looks in-depth into the various regional markets in India like Assam, Uttar Pradesh, Bihar, West Bengal, Maharashtra, Gujarat, Tamil Nadu, Kerala, and Karnataka, among others. 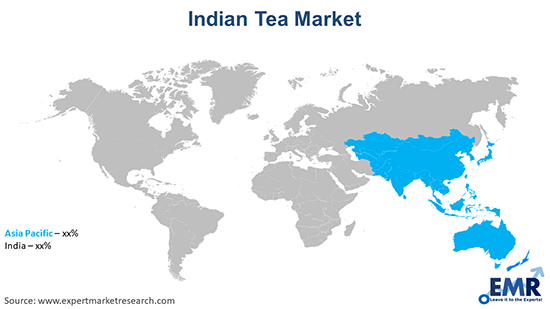 The tea industry in India is being driven by the high penetration of the beverage in the country across socio-economic classes. India’s healthy economic growth and the subsequent rise in the middle-class population are also proving to be catalysts for the industry’s growth as the consumers are preferring premium brands. The rising demand for the packaged variety of the beverage in both urban and rural areas due to lesser chances of adulteration, convenient storage, and their superior quality is further aiding the tea industry in India. The demand for packaged varieties with natural ingredients is also witnessing a growth.

The middle class is also willing to experiment more with tea blends, thus, providing an impetus for the growth of segments like fruit, herbal, and other speciality varieties. Green tea is expected to witness a robust growth in the coming years as its consumption is witnessing an increase as people become more aware of its health benefits. The industry for green tea is being driven by the urban population, supported by the increased intake of the beverage without milk in these areas. Thus, the rapid urbanisation along with the rise in disposable incomes in the country is further aiding the tea industry in India.

The growing popularity of cafes/lounges primarily serving variations of the beverage is expected to drive the industry in the coming years. The convenience of its distribution channels like local ‘kirana’ stores and supermarkets, along with the growing online channel, will also aid the industry growth. With busier lifestyles and a growing workforce, the RTD segment has the potential to witness a healthy increase as consumers seek more convenient foods and beverages. The industry will also be driven by the increasing innovation in packaging and flavours in the coming years. The rural sector presents another segment for the expansion of the industry.

Key Industry Players in the Tea Market in India

The report gives a detailed analysis of the following key players in the tea market in India, covering their competitive landscape, capacity, and latest developments like mergers, acquisitions, and investments, expansions of capacity, and plant turnarounds:

The consumption volume in the country reached nearly 1.10 million tons in 2020.

What is the growth rate of the industry?

The major drivers of the industry, such as rising disposable incomes, increasing population, and the healthy production and consumption of the beverage.

What are the key industry trends of the tea market in India?

Almost 80% of the total output in India is consumed domestically. The per capita consumption of the beverage in the country has witnessed a significant increase in the last decade. This is expected to be a key trend guiding the growth of the industry.

What are the major regions of tea market in India, according to the market report?

Assam, Uttar Pradesh, Bihar, West Bengal, Maharashtra, Gujarat, Tamil Nadu, Kerala, and Karnataka, among others, are the leading regions in the industry, with Assam accounting for the largest market share.

What is the dominant type of tea in the industry?

Black tea is the dominant type of the product in the market.

What are the leading packaging of tea in the industry?

The leading packaging in tea in the industry are loose tea, plastic containers, paper boards, aluminium tin, and tea bags.

The major distribution channels in the market are supermarkets/hypermarkets, speciality stores, convenience stores, and online retailers, among others.

What are the significant processing types in the industry?

The significant processing types in the industry are CTC and orthodox (traditional).

What are the application segments of the market?

The residential and commercial sectors are the leading application sectors of the industry.

The tea market in India is being driven by the healthy production and consumption of the beverage. In 2020, nearly 1.10 million tons of tea was consumed in the country. The industry in the country is projected to witness a further growth in the forecast period of 2022-2027, growing at a CAGR of 4.2%. By 2026, the tea market in India is expected to attain 1.40 million tons.

EMR’s meticulous research methodology delves deep into the industry, covering the macro and micro aspects of the industry. Based on its types, the market can be segmented into black, green, oolong, and white, among others, with black tea accounting for the largest market share. By packaging, the industry is divided into oose tea, plastic containers, paper boards, aluminium tin, and tea bags.  On the basis of application, the market can be divided into residential and commercial.  Based on distribution channel, the industry is categorised into supermarkets/hypermarkets, speciality stores, convenience stores, and online retailers, among others. By processing, the market is divided into CTC and orthodox (traditional). The major regions for tea market are Assam, Uttar Pradesh, Bihar West Bengal, Maharashtra, Gujarat, Tamil Nadu, Kerala, and Karnataka, among others, with Assam accounting for the largest share of the market. The key players in the above industry include Tata Global Beverages Limited, Hindustan Unilever Limited, Gujarat Tea Processors & Packers Ltd, Amar Tea Private Limited, Organic India Private Limited, and Pataka Industries Private Limited, among others.