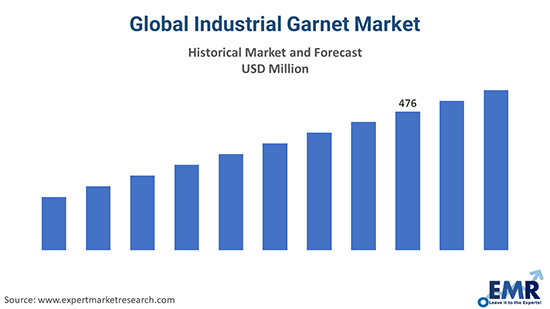 Silica is being replaced by garnet, specifically in the blast cleaning industry. Industrial garnet is also witnessing increased demand from the aluminium aircraft and shipbuilding industries for metal surface finishing and blast cleaning. With the growing number of water treatment plants worldwide, the demand for garnets used in the water filtration industry is also rising. With technological advancements, many small and large players are concentrating on providing better quality and reliability to garnet for specific applications.

Garnets are gemstone composed of deep red vitric silicate minerals used by a wide range of industries and for commercial applications. Garnets are available in different colours, like red, black, green, pink, blue, yellow, brown, violet, orange, and some are even colourless. Six minerals from the garnet family are andradite, spessartine, uvarovite, almandine, grossular, and pyrope. They have many excellent properties including strength, hardness, and inertness, which make them commercially viable. 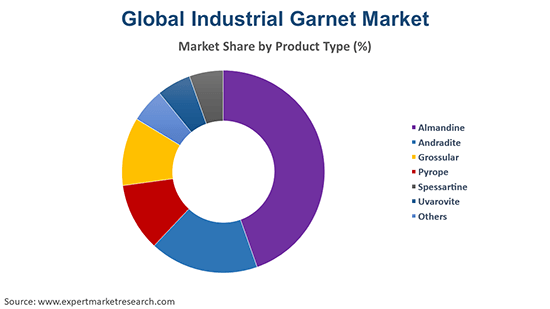 The product type can be categorised as follows:

The product finds wide applications in the following:

The regional markets for industrial garnet can be divided into North America, Europe, the Asia Pacific, Latin America, and the Middle East and Africa. 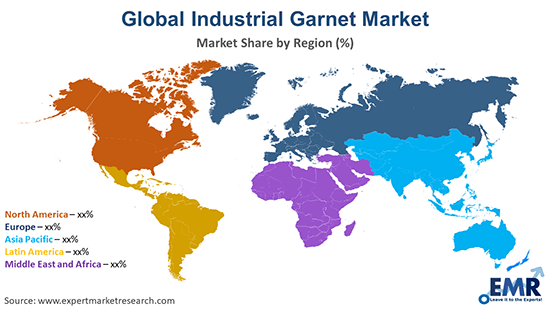 The makers of industrial garnet are concentrating on the production of high-grade garnet ores. This growing competition amongst the key players is also boosting the growth of the industry. Furthermore, garnet is also seeing a rise in applications in various end-use industries. In the blast cleaning industry, silica is being replaced by garnet, which is likely to contribute to the growth of the market during the forecast period. Industrial garnet is seeing increased consumption of aluminium aircraft and the shipbuilding industry. In addition, the governments of the various nations are investing in the development of water treatment plants. This increasing number of water treatment plants is expected to improve the growth of the industry.

The report gives a detailed analysis of the following key players in the global industrial garnet market, covering their competitive landscape, capacity, and latest developments like mergers, acquisitions, and investments, expansions of capacity, and plant turnarounds:

What is the growth rate of the global industrial garnet market?

The major market drivers include rising population, growing disposable income, intense competition among the key players, and the rising use of the product in the end use industries.

What are the key industry trends of the global industrial garnet market?

The rising investment by the governments in wastewater treatment plants is an important industrial trend that is informing the growth of the market.

What are the major regional markets of industrial garnet, according to the EMR report?

What are the leading product types of industrial garnets in the market?

The leading product types of industrial garnets in the market are almandine, andradite, grossular, pyrope, spessartine, and uvarovite, among others.

The major application segments in the industry are water jet cutting, abrasive blasting, water filtration, and abrasive powders, among others.

The global industrial garnet market is being driven by the rising competition among the key players. Aided by the rising investments in the wastewater treatment industry, the market is expected to witness a healthy growth in the forecast period of 2023-2028, growing at a CAGR of 7.2%. The market is projected to reach USD 480.6 million by 2027.

EMR’s meticulous research methodology delves deep into the market, covering the macro and micro aspects of the industry. Based on product type, the market is segmented into almandine, andradite, grossular, pyrope, spessartine, and uvarovite, among others. On the basis of application, the industry is divided into water jet cutting, abrasive blasting, water filtration, and abrasive powders, among others. The major regional markets for industrial garnet are North America, Europe, the Asia Pacific, Latin America, and the Middle East and Africa. The key players in the above market include GMA Garnet Group, Trimex Sands Private Limited, Barton International, Rizhao Garnet Ltd, Indian Ocean Garnet Sands Company Ltd., and V.V. Mineral, among others.