The Iraq dried pasta market increased at a CAGR of about 5% between 2016 and 2020. The market in Iraq expected to witness a healthy growth rate during the forecast period of 2022-2027 due to the growing penetration of foodservice joints and restaurants, particularly in the capital city of Baghdad, where the presence of several European restaurants has increased in recent years. The industry, however, is presently dependent on Turkey and Iran for the major volume of imported dried pasta.

The market in Iraq is widely being supported by the Middle East pasta market. The rising acceptance and adoption of the product in the country are also aiding the market growth. Consumers are increasingly opting for convenience food products because they are readily available and often have added fortification. Consumers in Iran are spending less time planning, as well as cooking meals at home, because of changing habits and increasingly busy lifestyles. Thus, dried pasta’s ease of preparation will positively influence the growth of the market in the country.

Dried pasta is made of the flour and water from the semolina. Such components are combined into a paste, then forced through moulds as well as cut into different types of pasta. When the dough has been formed, a drying process is practised through which all the moisture is removed. Because dry noodles contain zero moisture, these have a longer shelf life than fresh noodles, and if the packaging is not opened, they will last for up to two years. 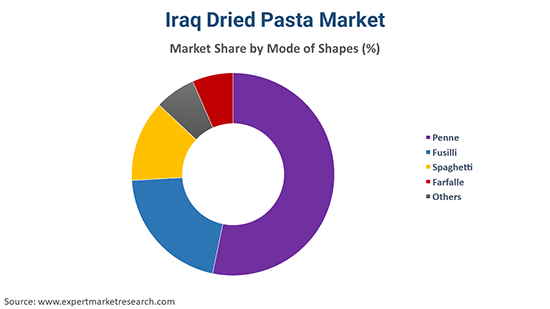 Based on SKU, the market can be divided between the following:

On the basis of shape, the industry can be segmented as follows: 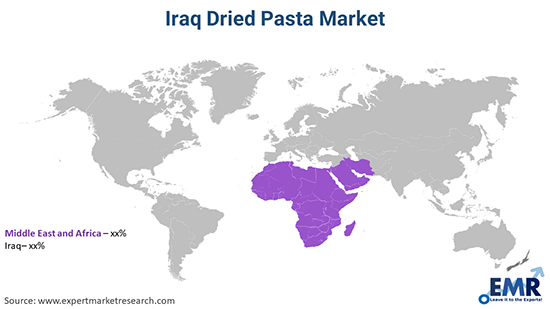 The dried pasta market in Iraq is primarily being driven by the rising demand for pasta owing to the rapid urbanisation, hectic lifestyles, and western influences, which has led consumers to migrate to easy-to-cook food items that require negligible cooking time. Since pasta is a convenient and healthy food, the consumption of the product is on the increase, specifically for the vermicelli, fusilli, and macaroni variants. In addition, many national and international producers are launching a wide range of pasta in emerging and potential markets to cater to the changing tastes and desires of consumers, which is also expected to influence the market in Iraq positively. The launch of new products to attract consumers, such as organic, vegan, and gluten-free pasta, is also expected to drive the market growth.

The report gives a detailed analysis of the key players in the Iraq dried pasta market, covering their competitive landscape, capacity, and latest developments like mergers, acquisitions, and investments, expansions of capacity, and plant turnarounds. The comprehensive EMR report provides an in-depth assessment of the market based on the Porter's five forces model along with giving a SWOT analysis.

What is the growth rate of Iraq dried pasta market?

The major drivers of the industry, such as rising disposable incomes, increasing health consciousness, growing demand for ready-to-cook and convenient food products, growing western influence, and the launch of a wide range of pasta in potential markets in combination with ingredients to cater regional demands, are expected to aid the market growth.

What are the key industry trends of the Iraq dried pasta market?

The key trend guiding the growth of the market include the launch of organic, vegan, and gluten-free pasta variants.

What are the major SKU segments of dried pasta in the industry in Iraq?

What are the significant shapes of the product in the industry?

The significant shapes of dried pasta are penne, fusilli, spaghetti, and farfalle.

The Iraq dried pasta market witnessed a CAGR of 5% in the forecast period of 5% in the historical period of 2017-2021. The market is being driven by the growing preference for ready-to-cook food products among consumers and the growing awareness regarding continental food with rising western influence. Aided by the growing penetration of manufacturers in the potential markets who are launching gluten-free, vegan, and organic pasta variants, the market is expected to witness a further growth in the forecast period of 2022-2027.

EMR’s meticulous research methodology delves deep into the market, covering the macro and micro aspects of the industry. Based on SKU, the industry in Iraq can be segmented into 500g, 400g, 200/250g, 1kg, and 5kg. On the basis of shape, the industry is categorised into penne, fusilli, spaghetti, and farfalle, among others.