The Latin America carbon black market attained a production volume of almost 0.7 million metric tons in 2020. It is expected to grow further in the forecast period of 2021-2026 and will aid the growth of the global industry. The global market is projected to grow at a CAGR of 4.4% between 2021 and 2026. 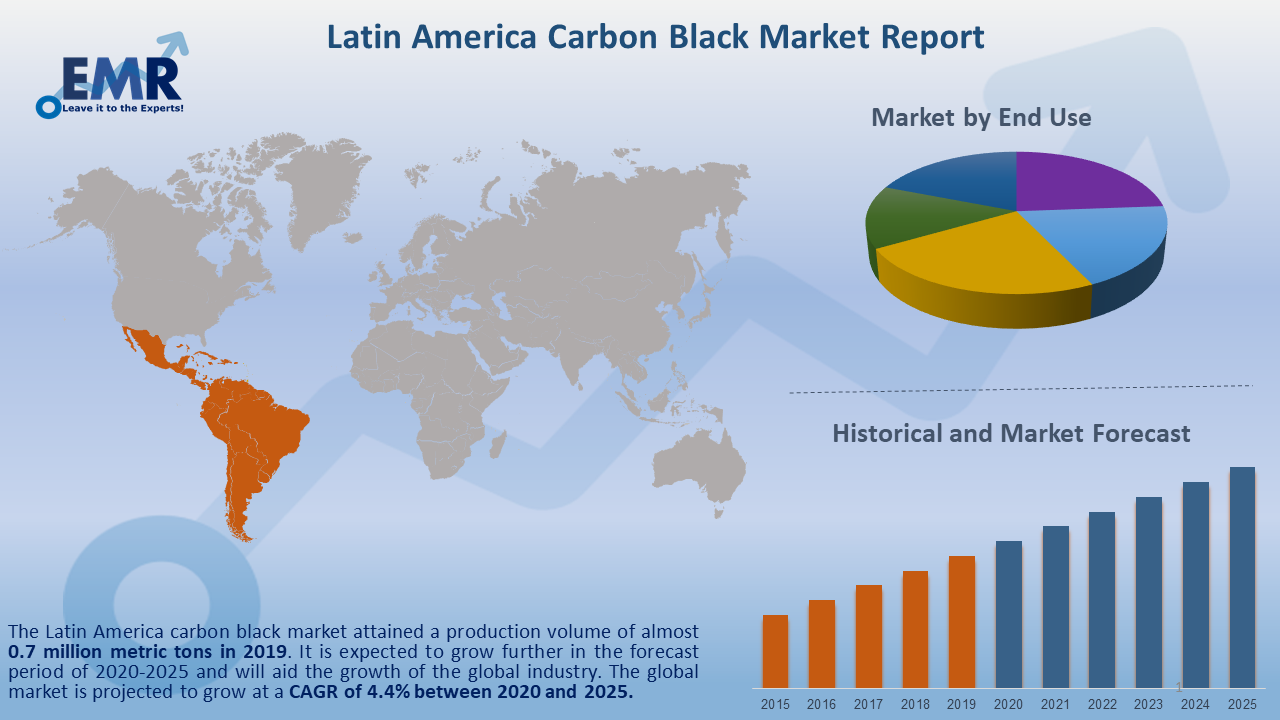 Although the share of Latin America in the industry is comparatively smaller as compared to Asia Pacific, Europe, and North America, the industry is expected to grow at a steady pace in the coming years driven by the region’s recovering automobiles industry. The region also exports significant quantities of low-cost carbon black from China to meet the rising local demand. Brazil, especially, is a growing market for the substance due to its thriving automobiles industry. The expanding plastic and rubber industries in the industry is also propelling the market forward. Mexico is another significant market in the Latin American region.

Globally, carbon black finds its leading use in the rubber industry finding application as a reinforcing filler. Tyre industry, especially, accounts for the majority of the applications of the material. The increasing ownership of automobiles globally is aiding the industry growth with the rising need for tyres. Its growing application in the printing, manufacturing, and construction sectors is also adding impetus to the industry growth. With companies investing heavily into several R & D undertakings, the global market is expected to be propelled forward with the addition of new end-uses due to technological advancements. In the forecast period, the industry is expected to be driven by emerging countries with growing economies and rising investments by major companies.

Carbon black is made of fine black amorphous carbon particles derived from the incomplete combustion of substances like petroleum or natural gas. Its various product types are specialty, lamp, channel, acetylene, furnace, gas, commodity, and thermal black, among others. It can be divided into grades as:

Its application is determined by its various properties like particle size, structure, surface chemistry, physical form, and porosity. The substance is commonly used in tyres, as colouring agents in inks, and as an electric conductive agent in high technology materials. Thus, it finds its applications in sectors like:

The report gives an analysis of the regional markets in the Latin American region like Brazil, Argentina, Colombia, and Mexico.

The Latin America carbon black market will be driven by the rising infrastructural activities within the region with the substance finding applications in paints, sealants, adhesives, and coatings. Aided by government schemes, Argentina is witnessing a growth in its infrastructural development like the rise in the number of social housing.  In Colombia, the infrastructure sector is expected to see up to USD 25 billion worth of investments by 2026.

Carbon black finds extensive application in the automotive sector where it is used in parts like tyres, tubes, hoses and other miscellaneous parts. With the automotive industry projected to see a healthy growth within the Latin America region, the market will find further impetus for its growth in the coming years. Brazil and Mexico are the largest automobiles producers in the Latin America. The two countries account for nearly 70% of the vehicles in the region. The Brazil automobiles industry is recovering from the economic downturn of 2016. In 2017, the registration of new vehicles witnessed a hike of 9.2% as compared to 2016, with nearly 2.17 million new vehicles registered in the country. Brazil’s automobile market is driven by the rising domestic demand for vehicles. Mexico has the second largest fleet of automobiles with 41.7 million cars, and its automobile industry is being driven by its proximity to a leading market like the US. The automobile industry is expected to see a further growth post the finalisation of the NAFTA negotiations with the US.

The Latin America carbon black market is also being aided by the growing applications in sectors like printing, ink, and plastic. The plastic industry in the region is being driven by the rising packaging industry. The printing industry is also emerging as a major end-use sector with rising applications of carbon black in publishing printing, print packaging, and commercial printing. The print packaging segment is expected to be worth USD 7.4 billion by 2021.

The report gives a detailed insight into the following key players in the Latin America carbon black market, looking into their competitive landscape, capacity, and latest developments like mergers and acquisitions, plant turnarounds, and capacity expansions:

The EMR report gives an in-depth insight into the manufacturing process and assesses the market based on Porter’s Five Forces model. The comprehensive report also provides an overview of the other global markets like North America, Asia Pacific, Europe, and Middle East and Africa. It offers a SWOT analysis of the industry as well.

The major drivers of the market such as rising disposable incomes, increasing population and growing infrastructural activities along with the growth of the applications sectors like transportation, printing, and packaging are expected to aid the market growth. EMR’s research methodology uses a combination of cutting-edge analytical tools and the expertise of their highly accomplished team, thus, providing their customers with market insights that are accurate, actionable, and help them remain ahead of their competition.

The production of carbon black in Europe reached a volume of 2.10 million metric tons in 2020, driven by the growth in the infrastructure industry. Aided by the thriving automotive sector, the global ...
Read More