Both Global Linear Alkylbenzene and Linear Alkylate Sulfonate Markets to Grow at a CAGR of 3% over the Forecast Period of 2022-2027.

The global linear alkylbenzene and linear alkylate sulfonate market is being driven by the rising demand from the emerging economies.

Linear alkylbenzene sulfonate (LAS) accounted for 97% of the linear alkylbenzene (LAB) industry share in 2016, which is further segmented by its end-use industries like laundry detergents, dishwashing, industrial cleaning, and household cleaning. The LAS demand, and in turn LAB demand, is being aided by the growing household and industrial cleaners industries in the Asia Pacific.

The Asia Pacific is the most significant demand market for LAB. The global linear alkylbenzene and linear alkylate sulfonate market is driven by the rise in the detergents demand, owing to the increasing disposable income and the infrastructural growth in the emerging economies such as China and India The rising demand for powder detergents in these regions are especially expected to drive the industry growth.  The industry is expected to witness a slower growth in North America and Europe due to a rising preference for liquid detergents, which consumes lower amount of LAB. North America is, thus, a net exporter of LAB due to reduced domestic demand, while the Asia Pacific is a net importer of the substance as no capacity addition has been announced within the region. 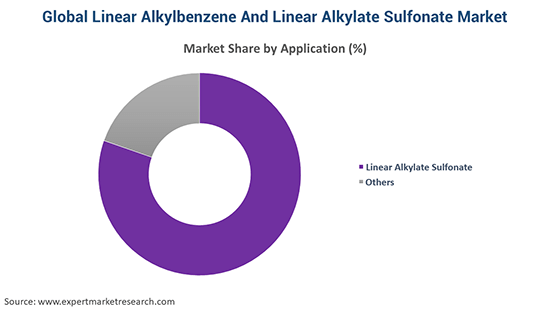 The report also covers the regional markets of the product like North America, the Asia Pacific, Europe, Latin America, and the Middle East and Africa. 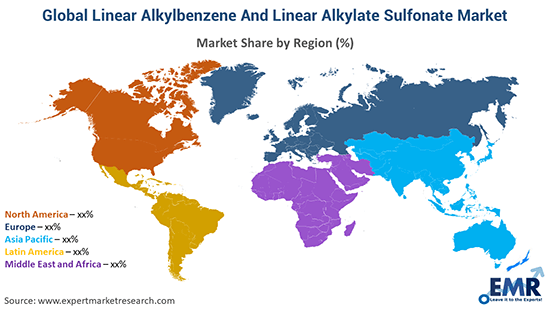 The increasing population, along with the rising disposable incomes in emerging economies such as the Asia Pacific, and Latin America due to the rapid industrialization, is expected to increase the demand for LAS and LAB in the coming years. The rise in the demand for detergents, particularly in emerging nations like China, India, Latin America, and others, is predicted to drive the market for LAB and LAS. The demand from the home care sector has risen in the Asia Pacific, further enhancing the industry growth. As a consequence of the improved economic activity in the emerging regions, demand for home and industrial cleaners are expected to improve, further enhancing the demand for LAB. LAS is a key derivative of LAB and the most frequently used surfactant in the production of these cleaners. The increasing demand for these cleaners is the major driver for industry growth.

The improved standard of living in emerging regions such as Africa, the Asia Pacific, and Latin America is expected to invigorate the market for detergents, and in turn, the LAB and LAS industry, which is employed in the former market. The low penetration of detergents in the above regions is expected to propel the industry growth for LAB and LAS further.

There is a shift in consumer behaviour, who are increasingly opting for liquid detergents over powder detergents in countries such as North America, China, and Western Europe. Minimal quantity of HLAS is used in the production of liquid detergents, compared to powder, thus, the demand for HLAS, and as a result, LAB is expected to be influenced negatively in the laundry sector in the coming years. However, the demand for powder detergents is expected to be driven by regions such as Latin America, India, and Africa, which will support the forecast growth of the LAB and LAS market. The oleochemical, methyl ester sulfonate (MES), LAB's essential alternative is not going to have any major impact on the LAB market in the forecast period, due to the low feedstock crude prices favouring the LAB market economics.

The report gives a detailed analysis of the following key players in the global linear alkylbenzene and linear alkylate sulfonate market, covering their competitive landscape, capacity, and latest developments like mergers, acquisitions, and investments, expansions of capacity, and plant turnarounds:

What was the global linear alkylbenzene and linear alkylate sulfonate market size in 2020?

The major drivers of the industry include the rising disposable incomes, increasing population, rapid industrialisation, rising demand for home and industrial cleaners, and the improved standard of living in emerging regions.

What are the key industry trends of the global linear alkylbenzene and linear alkylate sulfonate market?

The rising demand from the home care sector in the Asia Pacific is expected to be a key trend guiding the growth of the industry.

The global surfactants market attained a value of USD 45.71 billion in 2021, driven by the growing personal care industry and the rapid industrialisation and urbanisation. Aided by the growing innovat...
Read More

The global biocides market is expected to grow at a CAGR of 4% in the forecast period of 2022-2027.
Read More

The global alkyl polyglucosides (APG) biosurfactants market is driven by the excellent properties of the biosurfactant and the rising prevalenace for natural and biodegradable products. Aided by the g...
Read More

The global anionic surfactants market is being driven by the rising applications of the product in various downstream industries. Aided by rising process innovations, the market is expected to witness...
Read More