Global Linen Fabric Market to Grow at a Healthy Pace During 2021-2026, Aided by the Increased Preference for High-Quality Fabrics 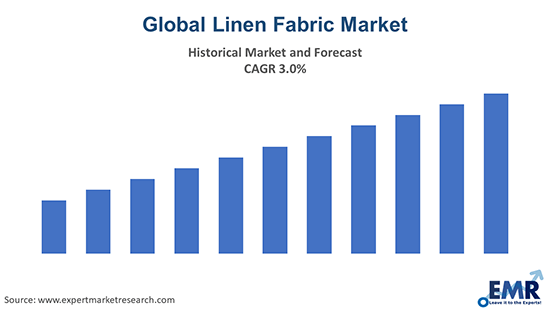 The growth of the fashion industry, especially in developing regions due to the increase in disposable incomes, is enhancing the demand for linen, making it a popular choice for fashion wear, especially in regions with hot and humid climates. Hence, the increased adoption of linen as a fabric for apparel is expected to drive the product demand in the forecast period.

Linen is a natural fabric made from the fibres of the stalk of the flax plant. It is a strong fibre with rapid drying and absorbent properties. It is most commonly used in various homeware items. Linen has several unique characteristics, including its cool touch, making it suitable to wear in a hot climate. 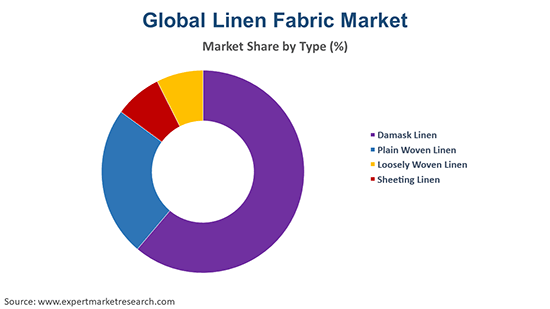 The major types of linen fabric are:

The EMR report looks into the regional markets of linen fabric like North America, Europe, the Asia Pacific, Latin America, and the Middle East and Africa.

Linen fabric is used extensively in the home décor industry due to its various properties. Further, it is widely used in the textile industry owing to its ability to keep the wearer comfortable in hot and humid conditions and has better durability and faster drying properties than cotton. Hence, the growth of these industries, especially in developing regions, is expected to boost the demand for linen fabric.

However, linen fabric remains less popular than cotton in most regions due to its high price in comparison to cotton, which is linked to its expensive production process. It also has poor elastic properties, which causes it to wrinkle easily, making it less suitable for use in daily garments.

The report presents a detailed analysis of the following key players in the global linen fabric market, looking into their capacity, market shares, and latest developments like capacity expansions, plant turnarounds, and mergers and acquisitions:

What was the global linen fabric market size in 2020?

The global linen fabric market is being aided by the rising flax fibre and tow production, which attained a volume of about 875.50 KMT in 2020.

During the historical period of 2018-2022, the flax fibre and tow production grew at a CAGR of 3.0%, thus, aiding the linen fabric industry growth.

The major drivers of the industry, such as the rising disposable incomes, growth in fashion industry, increased adoption in hot and humid climates, rapid urbanisation, and rising demand for high-quality fabrics, is expected to propel the growth of the industry.

What are the key industry trends of the global linen fabric market?

A key trend expected to drive the growth of the market is the growing home décor industry in developing regions.

What are the major regional markets of linen fabric, according to the EMR report?

What are the major types of linen fabric in the industry?

How is the market segmented on the basis of application?

The market is divided based on application as apparel, table and kitchen clothes, towels and other bathroom items, bedsheet and other bedroom items, curtains, blankets and cushions, and others.

The global linen fabric market is being driven by the growth of the fashion industry and the flax fibre and tow industry. During 2018-2022, the flax fibre and tow industry grew at a CAGR of 3.0% to attain a production volume of nearly 875.50 KMT in 2020. Aided by the growth of the home décor sector in developing regions, the linen fabric industry is expected to witness a healthy growth in the forecast period of 2023-2028.

EMR’s meticulous research methodology delves deep into the market, covering the macro and micro aspects of the industry. Based on its types, the market can be segmented into damask linen, plain woven linen, loosely woven linen, and sheeting linen. On the basis of application, the market is divided as apparel, table and kitchen clothes, towels and other bathroom items, bedsheet and other bedroom items, curtains, blankets and cushions, and others. The major regional markets for linen fabric are North America, Europe, the Asia Pacific, Latin America, and the Middle East and Africa. The key players in the above market include World Linen & Textile Company Inc, Grasim Industries Limited, China Linen Textile Industry Ltd, Ralph Lauren Corporation, Flax Company SARL, Northern Linen BV, and Libeco NV, among others.