Global LPG Market to Reach 354.06 Million Metric Tons by 2026, Aided by the Growing Adoption of the Product 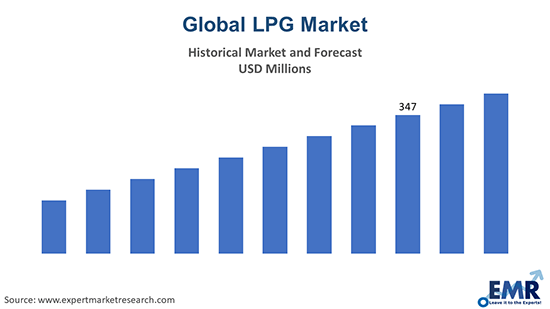 Europe held a significant share in the global market for LPG during the historical period of 2018-2022. This dominance can be attributed to the initiatives proposed by several European countries to decrease the carbon emissions in the atmosphere. Mature economies like Europe and North America are expected to witness a significant growth in the forecast period.

The regional market in the Asia Pacific is driven by the easy affordability, rising population, and subsequent high energy necessities. The growth in the petrochemical industry in China, India, Thailand, and South Korea is adding to the market growth. The LPG industry in Latin America, and the Middle East and Africa regions are also anticipated to witness a healthy growth in the forecast period.

Liquified petroleum gas (LPG) is a fuel constituting of a mixture of hydrocarbon gases. It contains either propane or butane or a mixture of both propane and butane.  LPG has emerged as a clean and efficient source of energy. It has gained popularity owing to the lower carbon emission compared to other fossil fuels.

The major sources of LPG are:

By distribution channel, the market is segmented into:

The EMR report looks into the regional markets of LPG like North America, Europe, the Asia Pacific, Latin America, and the Middle East and Africa.

Rising Environmental Concerns to Aid the Market Growth of LPG

The global market for LPG is being driven by the rising environmental concerns. LPG has remarkably lower carbon emissions compared to its conventional fossil fuel alternatives. Thus, LPG has emerged as a clean and efficient energy source in various industries. LPG is being increasingly adopted in several industries, such as agriculture, commercial, and manufacturing applications. A significant rise in domestic applications was observed owing to its utilisation for heating and cooking purposes. It is also considered as a potential alternative to conventional fuels, thus, reducing the oil dependency and lowering the greenhouse effect. Furthermore, the usage in the petrochemical and automobile industry is projected to provide an impetus for the market growth. These factors are expected to aid the LPG industry in the coming years.

The report presents a detailed analysis of the following key players in the global LPG market, looking into their capacity, market shares, and latest developments like capacity expansions, plant turnarounds, and mergers and acquisitions:

What was the global LPG market size in 2020?

The market is expected to grow at a CAGR of 1.7% during the forecast period.

The major drivers of the industry, such as the rising disposable incomes, growing environmental concerns, rapid urbanisation, growing population, and the necessity for clean fuels, are expected to aid the market growth.

What are the key industry trends of the global LPG market?

The key trend in the market is the increasing domestic usage for cooking applications.

What are the major regional markets of LPG, according to the EMR report?

The major regional markets of LPG are North America, Europe, Asia Pacific, Latin America, and the Middle East and Africa.

What are the leading sources of the product in the industry?

The leading sources of the product in the industry are refinery and gas processing.

What are the significant application segments of LPG in the market?

The significant application segments of LPG in the market are residential, petrochemical, industrial, transport, and commercial, among others.

What are the major distribution channels of LPG in the industry?

The distribution channels of LPG in the industry are institutional and retail.

EMR’s meticulous research methodology delves deep into the market, covering the macro and micro aspects of the industry. Based on its source, the market can be segmented into refinery and gas processing. The market can be broadly categorized based on its applications into residential, petrochemical, industrial, transport, and commercial, among others. By distribution channel, the market is segmented into institutional and retail. The key players in the above market include BP Plc, Exxon Mobil Corporation, Chevron Corporation, Phillips 66 Company, China Petroleum & Chemical Corporation, Total S.A., DCC Plc, and Bharat Petroleum Corporation Limited, among others.