Global Media Planning and Buying Market to be Driven by the Global Media Expenditure Market, which is Expected to Grow at a CAGR of 4% between 2021 and 2026.

The global media planning and buying market is being driven by the global media expenditure, which attained a value of nearly USD 425 billion in 2020. 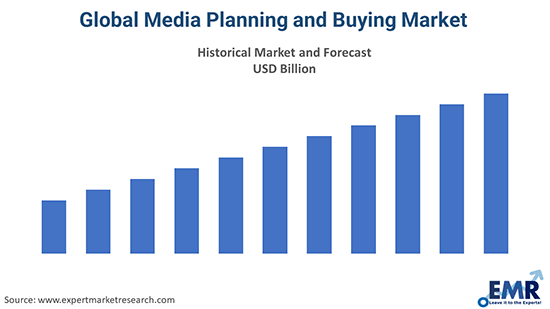 The global media expenditure is likely to grow at a CAGR of 4% in the forecast period of 2022-2027 to reach a value of nearly USD 537.6 billion by 2026. The United States is one of the major regions, contributing around 30% of this additional advertising expenditure, followed by China, India and Indonesia.

The global media planning and buying market size reached nearly USD 362.7 billion in 2018, accounting for 65% of the global advertising market which reached around USD 558 billion in the same year. The advertising market is majorly aided by the fastest growing medium, the internet, which attracted nearly 35% of the global advertisement spend in 2020. On an average, nearly 10 to 20% of television expenditure has moved to online videos. Expenditure on digital video advertisements rose by about 28% to USD 9 billion in the 2017-2018 period. Television viewing in regions including the United Kingdom and the United States has steadily declined over the last few years. This has led to the shift of consumer base to online videos.

The Asia Pacific has a high population of mobile users as well as second and third-screen activity numbers. This region is providing ample opportunities for key players on the forefront of advertisement technology and they are searching for new methods to increase their demand in the region. The rising penetration of internet and lower data rates in the emerging economies of the region will also aid the growth of the global media planning and buying market in the Asia Pacific region.

Media planning is the mechanism by which advertisers decide where, when, and how often an advertisement is screened to optimize engagements and return on investments (ROI). The media strategy may divide advertisement spending and resources among different online and offline platforms, such as broadcast, print, paid ads, video ads, or native content. An effective media plan may well result in a set of advertising opportunities that focus on specific audiences and fit into the marketing budget of the organization. Media buying refers to the purchase of advertising from a media company such as a television station, a newspaper, a magazine, a blog, or a website. It also involves negotiating the price and placement of advertisements, as well as researching the best new locations for ad placement. 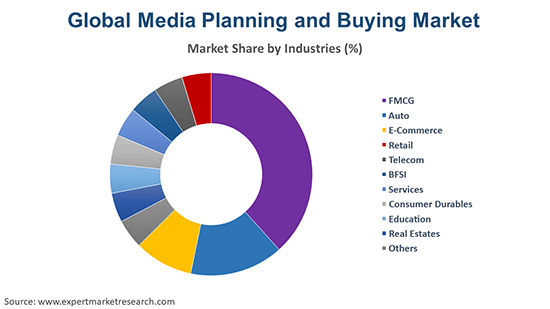 The industry for media planning and buying can be categorised based on demand contribution by industries into:

The market is being driven by the advertising market, which is aided by the digital channel, powered by the growing trend of online videos and social media. The net digital advertisement spending will grow by around 12% in the 2020-2021 period. The rise of mobile phones continues to drive the growth within the overall digital advertisement spending. More key players will spend higher proportions of their advertising media budgets on mobile due to its popularity among the population, especially the younger generation. The increasing intensive competition in the market has led to the creation of new brands and has increased the overall advertisement spend across industries. Moreover, the shift of consumers from television to online videos has aided the market growth. Consumers are leading this cross-screen viewing evolution in North America. The consumers in the United States are adding new screens and applications that complement TV. This increases the demand for televisions every year, thus, aiding the industry growth further.

The transition in the advertising budget from conventional to non-traditional media channels, growing emphasis on developing markets, and cross-screen planning are seen as major trends in the industry. Advertisers shift their budgets from traditional to digital channels to enhance their brand and reach their target audiences. Other drivers include Artificial Intelligence (AI) for media planning and buying and the growing location-based and technology-based media planning and buying, among others.

The report gives a detailed analysis of the following key players in the global media planning and buying market, covering their competitive landscape, capacity, and latest developments like mergers, acquisitions, and investments, expansions of capacity, and plant turnarounds:

The comprehensive EMR report provides an in-depth assessment of the industry based on the Porter’s five forces model, along with giving a SWOT analysis.

What was the global media planning and buying market size in 2020?

The global media planning and buying market is being aided by growth of the global media expenditure, which attained a value of nearly USD 425 billion in 2020.

The global media expenditure is projected to grow at a CAGR of 4% between 2021 and 2026, supporting the growth of the media planning and buying industry.

The global media expenditure is estimated to witness a healthy growth in the forecast period of 2022-2027 to reach USD 537.6 billion by 2026 and is expected to continue to aid the growth of the media planning and buying industry.

The major drivers of the industry, such as the rising disposable incomes, increasing population, rising use of mobile, increasing second and third-screen activity numbers, lower data rates in the emerging economies, and growing technological advancements, are expected to aid the market growth.

What are the key industry trends of the global media planning and buying market?

The key market trend guiding the growth of the media planning and buying industry includes the addition of new screens and applications that complement TV.

What are the major regions of media planning and buying, according to the market report?

What are the leading industries of media planning and buying in the market?

FMCG, auto, e-commerce, retail, telecom, BFSI, services, consumer durables, education, and real estates, among others, are the leading industries of media planning and buying in the market.

The global audiobooks market was driven by the expansion of the range of listening alternatives such as smartphones, smart speakers in the historical period. Aided by the prevalence of smart home tech...
Read More

The global 4K set-top box market attained a value of more than USD 4.8 billion in 2021, driven by the rising digitalisation of cable TV networks. Aided by the rising use of Over the Top (OTT) media se...
Read More

The global television services market attained a value of USD 3.32 billion in 2020, driven by the growing popularity of Over-The-Top (OTT) sector worldwide. Aided by the growing penetration of mobile ...
Read More

The global audio DSP market attained a value of about USD 12 billion in 2020, driven by the rising applications of audio DSP in the consumer electronics sector. Aided by the growing technological adva...
Read More