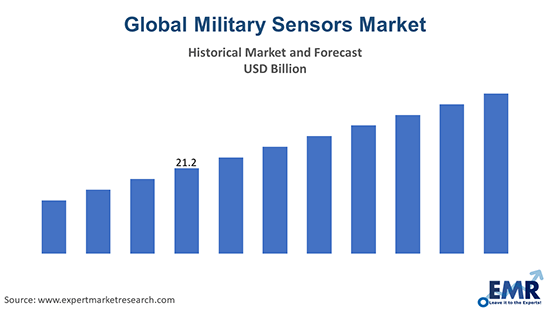 The rapid development of defence systems by military forces and the continued military modernisation programmes in separate nations are some of the variables anticipated to boost the development of the military sensors industry over the forecast period.

The global military sensors market can be divided based on segments like component, platform, and end-use. 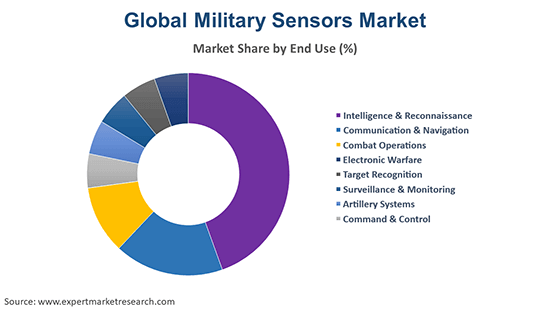 The military sensors market can be divided based on its platform into:

The industry can be broadly categorised based on its end-uses into:

The EMR report looks into the regional military sensors markets like North America, Latin America, the Asia Pacific, Europe, and the Middle East and Africa. 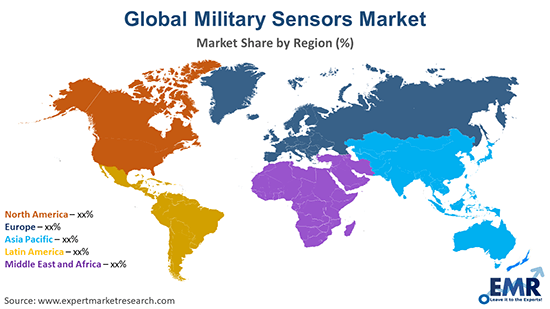 The increasing demand for real-time data processing and analysis through artificial intelligence and machine learning is anticipated to drive the development of the military sensors market, especially its software segment. The land segment growth can be ascribed to the enhanced demand for unmanned ground vehicles in the defence sector. The electronic warfare segment is expected to develop at the highest CAGR between 2021 and 2026.

Countries like the United States, China, and India are purchasing military aircrafts, which is aiding the overall market growth. Further, the Asia Pacific market is expected to witness the fastest growth rate driven by the rapidly emerging economies within the region.

The report presents a detailed analysis of the following key players in the global military sensors market, looking into their capacity, market shares, and latest developments like capacity expansions, plant turnarounds, and mergers and acquisitions:

The EMR report gives an in-depth insight into the military sensors market by providing a SWOT analysis as well as an analysis of Porter’s Five Forces model.

What was the global military sensors market size in 2020?

In 2020, the global military sensors market attained a value of nearly USD 23.8 billion.

The major drivers of the industry, such as the growing investment in the military and defence sector by the governments across the nations, advent of AI and machine learning, growing demand for unmanned ground vehicles, and the need for real-time data analysis, are expected to aid the market growth.

What are the key industry trends of the global military sensors market?

The key market trends guiding the growth of the military sensors industry include the favourable government initiatives and the growing technological advancements.

What are the major regional markets of military sensors, according to the EMR report?

What are the leading components of military sensors in the industry?

Hardware, software, and cybersecurity solutions are the leading components of military sensors in the industry.

What are the significant platforms for the product in the industry?

Airborne, land, naval, space, and munitions are the significant platforms for the product available in the industry.

What are the major end use segments of military sensors?

The major end use segments of the product include intelligence and reconnaissance, communication and navigation, combat operations, electronic warfare, target recognition, surveillance and monitoring, artillery systems, and command and control.

The global military sensors market attained a value of USD 23.8 billion in 2020, driven by the growing automation of defence sector across the world. Aided by the technological advancements and government support, the market is expected to witness a further growth in the forecast period of 2022-2027, growing at a CAGR of 5.4%.

EMR’s meticulous research methodology delves deep into the market, covering the macro and micro aspects of the industry. Based on component, the industry can be segmented into hardware, software, and cybersecurity solutions. By platform, the industry can be divided into airborne, land, naval, space, and munitions. On the basis of end use, the industry is categorised into intelligence and reconnaissance, communication and navigation, combat operations, electronic warfare, target recognition, surveillance and monitoring, artillery systems, and command and control. The major regional markets for military sensors are North America, Europe, the Asia Pacific, Latin America, and the Middle East and Africa. The key players in the above market include Honeywell International Inc., TE Connectivity Ltd., Raytheon Company, Lockheed Martin Corporation, Thales SA, Kongsberg Gruppen, Ultra Electronics, Esterline Technologies Corporation, General Electric Company, BAE Systems PLC, Microflown Avisa B.V., Vectornav Technologies, LLC, and others.

The global high speed fibre optic sensor market was driven by the growing demand for various high-end industrial applications in the historical period. Aided by the increased investments in R&D and gr...
Read More

The global automotive rain sensor market attained a value of nearly USD 5 billion in 2021, driven by the increasing installation of rain sensors in automobiles. Aided by the growing safety concerns, t...
Read More

The global automotive powertrain sensors market attained a value of nearly USD 17.1 billion in 2021, driven by the growing need to ensure vehicle safety. Aided by the technological advancements and st...
Read More

The global force sensors market attained a value of more than USD 2160.2 million in 2021, driven by the expansion of the major end-use industries of the product. Aided by the rapid technological advan...
Read More

The global image sensors market attained value of more than USD 19 billion in 2021, driven by the rising number of cameras used in consumer electronic devices. Aided by the rising spending on security...
Read More