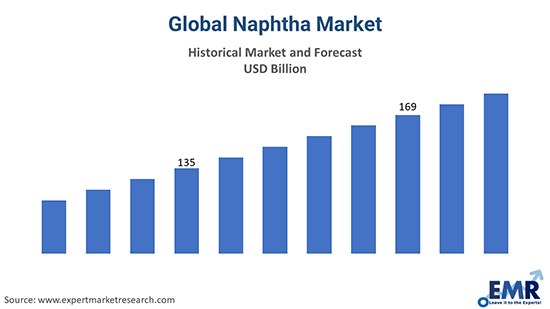 The rising demand for plastic products is spurring the demand for polyethylene and polypropylene which, in turn, is boosting the consumption of naphtha.

In the Asia Pacific, China holds around a fifth of the global share followed by South Korea in the global naphtha market. The production rate of the product in China grew annually by 9% during 2012-2016. It is also a significant consumer and importer of the product. Despite the ongoing trade war with the US, consumption of naphtha in China has been growing at a healthy pace. In October 2018, the country imported 516, 985 tonnes of the substance, a robust growth of 11% as compared to October 2017.

The total production of heavy naphtha is twice as large in volumes as the production of light variety. However, light naphtha is a heavily traded commodity. The production of light naphtha is widely spread in three regions - North America, Northeast Asia, and the Middle East – which account for nearly 60% of the total global production. Its output is increasing globally and is expected to create a surplus stock in the coming years, exceeding the market demand for the product. The fast-expanding tight oil and shale gas output in North America, particularly the US, will contribute to the projected surplus supply and capacity expansions. The North America region might soon overtake the Middle East and Africa as the leading exporter of light naphtha. The global consumption of the substance, on the other hand, is anticipated to witness a continuous rise at a moderate annual rate of around 2% in the next ten years.

Naphtha refers to a group of flammable and volatile mixtures of liquid hydrocarbons. It is colourless, insoluble in water and incompatible with strong oxidisers. It is obtained by the distillation of various organic substances like coal tar, wood, petroleum, and shale. It is known by several names such as petroleum or wood naphtha, white gas, ligroin, etc., depending on its source, use, and composition. 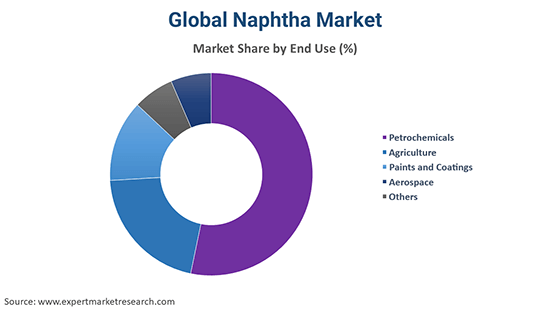 Based on the hydrocarbon structure and refinery process, there are two compositions of naphtha – light (paraffinic) and heavy naphtha. Light naphtha is commonly used in petrochemical steam crackers whereas heavy naphtha plays a vital role in refinery catalytic reformers to improve fuel performance.

Some of its major end-use sectors include petrochemicals, agriculture, paints and coatings, and aerospace, among others. It is primarily used as a feedstock for manufacturing high-octane gasoline component through the process of catalytic reforming. Moreover, it finds application in the chemical and petrochemical industries for manufacturing solvents and olefins in steam crackers, respectively. 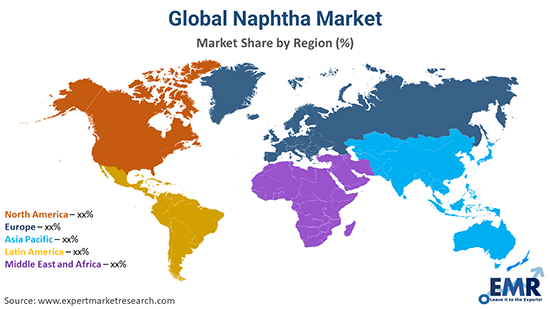 The global naphtha market is being fuelled by the growing consumption of the product in diverse industries like construction, transportation, and plastic. The growing demand for gasoline is fostering the growth of the industry as the olefin-rich material is used for blending gasoline-grade fuel. In addition, the increasing demand for petrochemicals, like propylene and ethylene for the production of plastics, is driving the global naphtha market. Further, the advent of alternative technologies like hydro-pyrolysis of the product saves energy and helps in reducing the production cost. This, coupled with the development of advanced furnace materials and distillation column, is creating a positive outlook for the global naphtha market.

The Asia Pacific represents the leading naphtha market owing to the increasing sales of vehicles in the region. The growing consumption of plastics in the automotive and construction sectors is also contributing to the global naphtha market growth. Further, geographical advantages and high consolidation of oil refineries in the Middle East offer ample opportunities to the energy and chemical sectors in the region. Whereas, stringent regulatory scenario in North America along with the declining production of petroleum products may hinder the growth of the industry. Besides this, the petrochemical industry in North America, particularly in the United States, is preferring low-cost alternatives like LPG which is expected to deter the growth.

The report examines the following major players in the global naphtha market including their capacity, market share, and latest developments like plant turnarounds, capacity expansions, and mergers and acquisitions:

What was the global naphtha market size in 2022?

In 2022, the global naphtha market attained a value of nearly USD 161.4 billion.

What is the growth rate of the naphtha market?

The major drivers of the market include growing consumption of the product in diverse industries, like construction, transportation, and plastic, growing demand for gasoline, increasing demand for petrochemicals, and the development of advanced furnace materials and distillation column.

What are the key trends in the global naphtha market?

The key trends in the market include the advent of alternative technologies like hydro-pyrolysis of the product, which saves energy and helps in reducing the production cost.

What are the major regions of naphtha, according to the market report?

The major regions in the market are North America, Latin America, the Middle East and Africa, Europe, and the Asia Pacific.

What are the leading types of naphtha in the market?

Light and heavy are the leading types of naphtha in the market.

What are the major end use sectors of naphtha in the market?

Petrochemicals, agriculture, paints and coatings, and aerospace, among others, are the major end use sectors of naphtha in the market.

The global naphtha market attained a value of USD 161.4 billion in 2022, driven by the growing consumption of the product in diverse industries like construction, transportation, and plastic. Aided by the growing development of advanced furnace materials and distillation column, the market is expected to witness a further growth in the forecast period of 2023-2028, growing at a CAGR of 4.20%. The naphtha market is projected to reach USD 205.9 billion by 2028.

EMR’s meticulous research methodology delves deep into the market, covering the macro and micro aspects of the industry. Based on its types, the market can be segmented into light and heavy. On the basis of end uses, the industry is divided into petrochemicals, agriculture, paints and coatings, and aerospace, among others. The major regional markets for naphtha are North America, Europe, the Asia Pacific, Latin America, and the Middle East and Africa. The key players in the above market include Shell Corporation, Chevron Phillips Chemical Company LLC, Exxon Mobil Corporation, Mitsubishi Chemical Corporation, Saudi Basic Industries Corporation, Vitol Group, Others.