Global Natural Sweeteners Market to be aided by the Expected Growth in the Global Stevia Market at a CAGR of 8.6% in the Forecast Period of 2021-2026

The global natural sweeteners market is being driven by the surged demand for the production of stevia. The global production value of stevia stood at nearly USD 521.3 million in 2020. 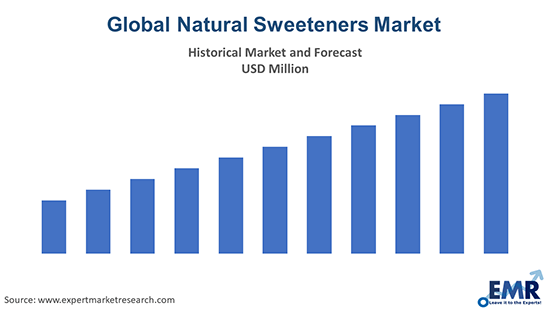 The rising health awareness among the consumers, with the shift towards low-calorie alternatives is the major factor aiding the global natural sweeteners industry growth. Sugar has high-calorie content which could lead to serious health issues and, thus, the consumers are preferring natural sweeteners like stevia over sugar. It was estimated that diabetes was the seventh leading cause of death in 2016, causing nearly 1.5 million deaths in the aforementioned year. The Asia Pacific and Europe are the global leaders dominating the stevia market. The two regions, together, account for about 62% of the total industry share. The stevia use is accelerating in these two regions year by year, thus, providing a boost to the industry. Within the Asia Pacific region, China is the largest producer of stevia while Japan is the leading consumer.

With the increase in the demand for sugar alternatives, the use of maple syrup in bakery products (such as waffles, pancakes, etc.), cereals, and dairy products have increased, contributing to the growth of global natural sweeteners industry. Canada, the world’s largest exporter of maple products, has witnessed a significant increase in the production of maple syrup for two consecutive years in the 2016-2017 period. In 2017, the production capacity of maple syrup in Canada reached 12.5 million gallons, showing a growth of 41% from 2016 and 3% from 2016. The growing consumer demand for natural products has provided a boost in the sales of maple syrup, thus, aiding the global natural sweeteners industry. 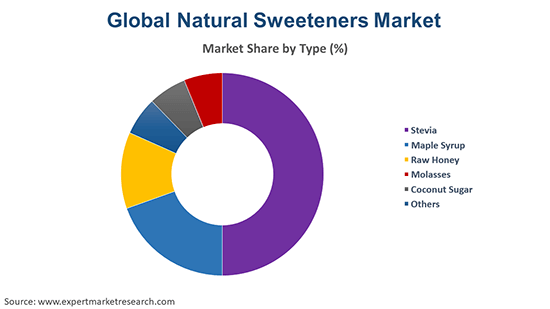 They find their applications in the food, beverages, pharmaceuticals, and personal care sectors, among others. They are distributed through various distribution channels like hypermarkets/supermarkets, convenience stores, retail stores, online retailers, and others. Moreover, based on intensity, the industry can be bifurcated into high-intensity sweeteners and low-intensity sweeteners. The regional markets of the product have also been analysed in the report provided by EMR. These markets are North America, Europe, Asia Pacific, Latin America, and Middle East and Africa. 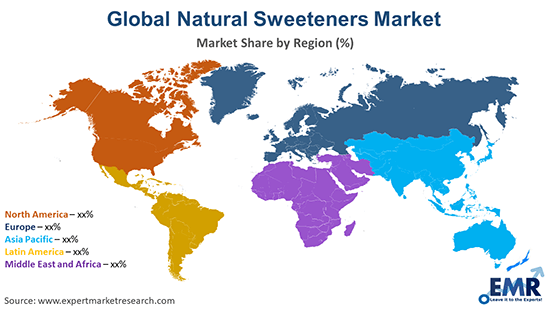 The global natural sweeteners industry is being driven by the increasing health awareness among the consumers, resulting in a shift away from sugary products in their food habits. The demand for the lower calorie alternatives of sugar is on the rise. The consumers are demanding natural sweeteners over artificial ones, especially in soft drinks, thus, driving the industry further. The sales of food and beverage items that contained zero-calorie sweeteners and were free from artificial sweeteners, recorded a growth of 16% in 2017. With the increase in the consumption of sports and energy drinks in the beverage sector, the industry is making a further progress. The rising production of dietary foods and sports and energy drinks are aiding the growth the industry. The increase in the usage of natural sweeteners in the pharmaceutical sector is also emerging as a key factor, which is propelling the industry forward. Their use in the production of cosmetics has increased, which will further enhance the market growth in the coming years.

Countries such as Mexico and the U.S. are contributing to the growth of the market with their high production and export of non-alcoholic and ready-to-drink beverages. In the Asia Pacific, the alternative sweetener industry has seen a healthy growth due to the increasing health problems, which is also contributing to the growth of the natural sweeteners industry. Also, Latin America and North America, the other significant markets are being driven by the growing rates of obesity and diabetes in the regions. The governments in these regions are discouraging the use of sugar by applying levies on sugar and other items produced from sugar, which is further aiding the industry growth.

The report gives a detailed analysis of the following key players in the global natural sweeteners industry, covering their competitive landscape, capacity, and recent developments like mergers and acquisitions, investments, capacity expansions, and plant turnarounds:

On the basis of SWOT and Porter’s five forces analysis, the EMR report provides an in-depth analysis of the market.

What was the global natural sweeteners market size in 2020?

The global natural sweeteners market is being supported by the increasing production value of stevia, which reached nearly USD 521.3 million in 2020.

The market is being aided by the increasing production value of stevia, which is projected to grow at a CAGR of 8.6% between 2022 and 2027.

What are the key industry trends of the global natural sweeteners market?

The increasing health awareness among consumers and a shift towards low-calorie alternatives are the key industry trends propelling the market growth.

What are the major regional markets of natural sweeteners, according to the EMR report?

What are the significant types of the product?

What are the major products considered within the market report?

The major products include stevia, maple syrup, honey, molasses, coconut sugar, and others.

What are the various applications of the product?

The various applications are food, beverages, pharmaceuticals, personal care, and others.

What significant distribution channels of the market?

The global natural sweeteners market is being supported by the increasing production value of stevia, which reached USD 521.3 million in 2020, driven by the increasing health awareness among consumers. Aided by the growing consumer demand for natural products, the market is expected to witness a further growth. The global stevia industry is expected to grow at a CAGR of 8.6% in the forecast period of 2022-2027.

EMR's meticulous research methodology delves deep into the market, covering the macro and micro aspects of the industry. By type, the market can be divided into low intensity sweeteners, high intensity sweeteners, and others. On the basis of product, the industry can be segregated stevia, maple syrup, honey, molasses, coconut sugar, and others. The market, on the basis of application, can be segmented into food, beverages, pharmaceuticals, personal care, and others. Based on distribution channel, the industry can be categorised into hypermarkets/supermarkets, convenience stores, specialty stores, online retailers, and others. The major regional markets for natural sweeteners are North America, Europe, the Asia Pacific, Latin America, and the Middle East and Africa. The major players in the industry are Ingredion Incorporated, Tate & Lyle PLC, Cargill, Incorporated, Archer Daniels Midland Company, Capilano Honey Ltd., Roodin Group Co., Ltd., Pastili Limited, PT. Coco Sugar Indonesia., Roquette Frères, Sunwin Stevia International Inc., GLG Life Tech Corporation, K K Birla Group of Sugar Companies, Others.