Global Neuromodulation Devices Market to Grow at a CAGR of 9% During 2021-2026, Aided by Rising Prevalence of Neurological Disorders 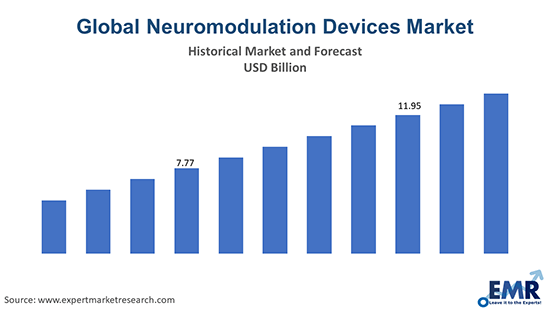 Neuromodulation, as the name suggests, is a technology acting on nerves directly. This technology involves modifying or modulating nerve activity by the action of stimulus. This stimulus can be pharmaceutical, chemical, or electrical by nature. Neuromodulation can also include stimuli like an electric current, a magnetic field, or a drug delivered directly into the subdural space. These stimulating agents release neurotransmitters, like dopamine or other chemical messengers, help nerve stimulation. Neuromodulating agents help in the excitation of neural circuits.

Neuromodulation devices help stop the neural attacks already in process and are also utilised as a precautionary measure to prevent impending attacks.

There are various methods of neuromodulation depending on the nature of the delivered agents at the targeted area. Electrical, chemical, and magnetic are three effective methods driving the market growth. Depending on the technique, these methods are further bifurcated into invasive and non-invasive.

The advancements in understanding neurological networks and stimulation mechanisms will help the neuromodulation devices market grow. 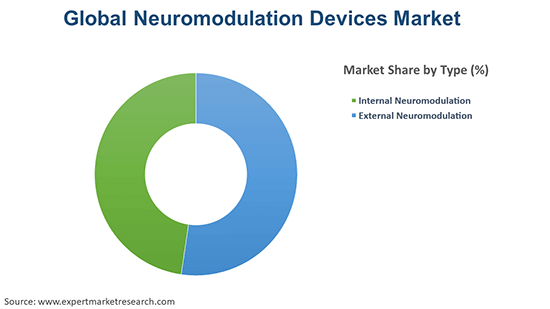 The market can be categorised into the following segments: 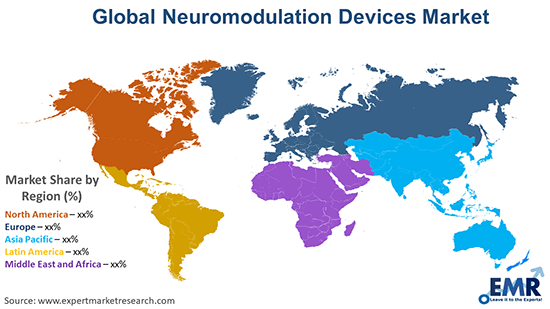 According to WHO, around 12.2 million people suffer from stroke every year.  Epilepsy, a significant part of neurological disorders, affects about 50 million people annually . Thus, these higher incidence rates will increase the demand for neuromodulation devices and indirectly facilitate the market growth.

Neurological disorders are among the top causes of disability. These disorders account for the world’s second preeminent cause of mortalities worldwide. The major contributors are migraine, epilepsy, stroke, meningitis, and dementia.

The European Academy of Neurology demonstrated that one in every three people is affected by neurological disease globally. Thus, the increased demand is the key factor propelling the expansion of the market.

Researchers stated that neurological disorders are most prevalent in the elderly population. The risk of neurological disorders increases with the increasing age. Hence, the increasing geriatric population will increase the risk of neurodegenerative diseases. Thus, this will demand more neuromodulation devices and supplement neuromodulation devices market growth.

North America Accounts for the Largest Share of the Market

Neurological diseases are more prevalent in developing countries than in developed ones because of the geographical differences in risk factors. North America accounts for the largest market share in neuromodulation devices due to their greater awareness and technological advancements.

The rapidly increasing population will also propel the growth of the neuromodulation device market. Men are more affected by neurological diseases than women.

Incorporating Artificial Intelligence (AI) into neurology seems to be a promising factor that will assist in developing the neuromodulation devices market.

There is also an increase in investments by top companies, thus, contributing to the development of the devices market. These key players focus on the approval and launching of new products, thus leading to the expansion of the market. This will provide lucrative opportunities to the market during the forecast period.

The flow of current from the electrodes to the nerve helps in producing the necessary nerve stimulation, which can either suppress the pain signals or stimulate the new signals, thus helping in the eradication of pain.

Neuromodulation devices release pharmacological or electrical stimulating agents at the target site, which helps in the modulation or alteration of the abnormal neural pathway. These devices are of different types depending on the placement of the device within the patient’s body. The devices placed outside the patient’s body are referred to as external ones, while those that need to be placed inside the body are called implantable devices.

The management of chronic neuropathic pain accounts for the maximum share in the neuromodulation devices market. The other factors accounting for this treatment market are managing Parkinson’s disease, epilepsy, stroke, tremors, dystonia, gastrointestinal and cardiovascular disorders.

A novel therapy incorporating the brain-computer interface is used to treat spinal cord damage. In this therapy, neuromodulation senses the motor signals and then helps in connecting those signals with the outside world. This helps in the correction of altered movements as well.

The invasive neuromodulation techniques are used in the treatment of cancer pain. Neuromodulation devices release stimulants which help change pain’s electric signals. In this therapy, a sensation of vibration is released, which primarily overlaps the pain signal and thus suppresses the pain intensity. Neuromodulation is used to treat the pain caused by surgery and chemotherapy.

The neuromodulation principle is utilised to alleviate the symptoms associated with urological disorders. Voiding dysfunction is caused due to neurological damage to the bladder. The main aim of therapy is to ensure the sensation of pulsating current in the perineal region through sacral nerve stimulation. Hence, this therapy helps reduce pain and increase bladder control.

Deep brain stimulation, a therapy used for treating Parkinson’s disease, is also based on neuromodulation. This therapy incorporates the application of implanted neuromodulation devices. These embedded devices generally help deliver the small pulses of current to the specific locations of the brain. This helps in the restoration of neural circuits, facilitating the standard movement control.

Epilepsy is associated with recurring seizures and is the third most common neurological disorder. The Food and Drug Administration has approved the deep brain stimulation technique for treating motor symptoms. The vagus nerve stimulation was also used for the treatment of epilepsy.

The primary mechanism of these devices is to modulate the pain signals, helping in pain suppression. The neuromodulation devices also help make the myocardial cells more resistant to ischemia challenges, which assist in providing an anti-anginal effect.

Several clinical trials for neuromodulation devices are being developed and researched by healthcare organisations and pharma companies. To get a safer and more efficient treatment for a wide range of diseases, investigators are continuously analysing and reformulating the current technologies. They are more drawn toward studying new treatments with new targeted therapies.

Abbott is doing clinical trials to assess the safety and efficacy of deep brain stimulation. These trials aim to ensure the application of neuromodulation devices to treat depression, which conventional methods cannot. The successful results of these trials will help in the availability of better treatment opportunities for patients with depression.

Scientists performed clinical trials at Vanderbilt University in the United States to assess the efficacy of deep brain stimulation in early-stage Parkinson’s disease. It was concluded that the application of these invasive neuromodulation techniques helped in the suppression of disease growth. Thus, the early onset of these devices also helped in the slow progression of Parkinson’s disease.

The FDA also approved the incorporation of deep brain stimulation in the treatment of mild Alzheimer’s disease. The clinical trials for this therapy are being run in Canada, the US, and Germany for further research and analysis.

In 2022, clinical trials for a new neuromodulation device, Lenire, have also begun. Scientists found this device as a potential source for treating tinnitus. These new targeted therapies will help the market grow further.

The report gives an in-depth analysis of the key players involved in the market, sponsors manufacturing the drugs, and putting them through trials to get FDA approvals. The neuromodulation devices market companies included in the market are as follows:

*Additional insights provided are customisable as per client requirements.

What are the key factors driving the growth of the neuromodulation devices market?

The rising prevalence of neurologic disorders, advancements in technology, and more extensive investments by key companies are the major factors driving the growth of the market.

How is the neuromodulation devices market segmented based on indication?

Based on the disease, the market is categorised into pain management, neurological disorders, and respiratory disorders.

What are the distribution channels in the neuromodulation devices market?

The distribution channels in this market are hospitals, testing laboratories, and research laboratories.

What are the different regional markets in the neuromodulation devices market?

What are the restraints in the neuromodulation devices market?

The expensive costs of the devices, stringent government policies, and lack of awareness are the limiting factors in this market.

What is the primary purpose of neuromodulation?

What are neuromodulation devices?

Neuromodulation devices are the devices that are required to regulate the nerve signals and hence in the modulation of the nervous system.

What are the types of neuromodulations?

Where does the device find its applications?

The device finds applications in internal and external neuromodulation.

What are the latest clinical trials in neuromodulation devices?

Lenire is a new neuromodulating device that US FDA has approved for clinical trials.

How do neuromodulation devices used in the treatment of gastric disorders?

Neuromodulation devices are used to regulate the muscular contractions of the stomach. Hence, this helps in the treatment of GIT disorders.

Who are the key leaders in the neuromodulation devices market?

The global neuromodulation devices market attained a value of USD 6 billion in 2020, driven by the applications in the healthcare sector, being increasingly used for chronic pain relief, epilepsy, depression, Parkinson’s disease, and other health problems. Aided by the growing technological advancements, the market is expected to witness a further growth in the forecast period of 2022-2027, growing at a CAGR of 9%. The market is projected to reach USD 10 billion by 2026.