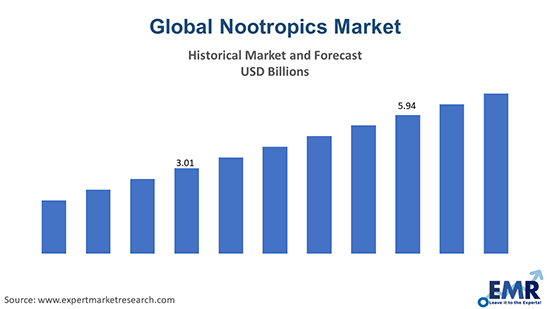 North America has the highest number of nootropics consumers regionally and holds the major market share of nootropics. The U.S. Food and Drug Administration has classified non-prescription nootropics product under the Generally Regarded as Safe (GRAS) category, thereby easing market expansion. Hence, it is the home of the largest market players in the nootropics industry. Consumption of multi-vitamin tablets for improving functional abilities is fairly common among the population of this region. High awareness for cognitive health, the rise of self-directed buyers, and a growing population are some of the factors that drive the market dominance of North America. The Asia Pacific is expected to be the fastest growing market in the forecast period. Countries such as China and India have a great history of cognitive based natural drugs. Foreign investment in collaboration with regional players holds immense potential for the growth of the nootropics industry.

Nootropics are drugs or supplements that claim to improve cognitive function, specifically executive functions, memory, creativity, or motivation, in healthy individuals. These have been in the market for several decades, such as caffeine and multivitamins - substances approved by FDA as dietary supplements and classified as GRAS (generally regarded as safe). Currently, these products are being marketed and sold to academic and professional overachievers to augment their brain functions. 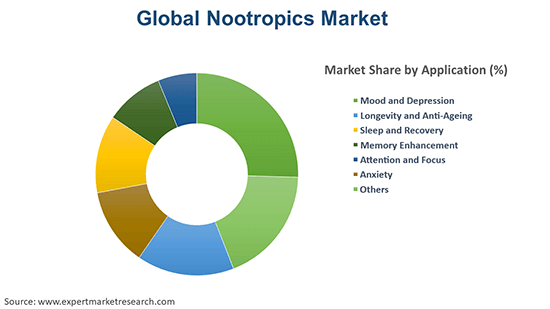 The market is bifurcated by type into:

The market is segmented on the basis of distribution channel into:

The market is segregated on the basis of application into: 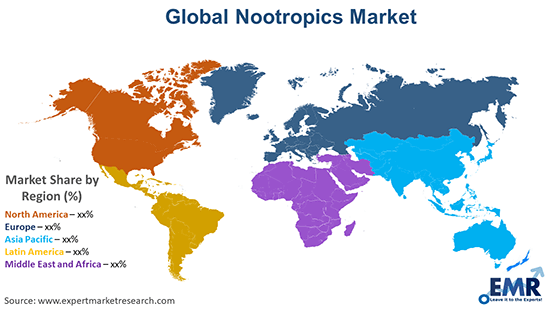 Rising Internet Penetration to Aid the Market Growth of Nootropics

Due to a highly competitive and challenging work environment, the market for brain boosters has witnessed a rise and is expected to grow in the forecast period. The rising demand for improved decision making in the sports industry and growing awareness with respect to mental health are also boosting the rise of the market for nootropics. Due to increasing awareness, rising disposable incomes, and increased demand for productivity, the market is expected to grow rapidly in emerging countries such as China and India. As cognitive enhancers made from natural and herbal substances have already been common in these areas historically, mergers between foreign and local companies are expected to push the market for nootropics in these areas forward. However, on the flip side, various side effects, addiction, lack of awareness, the stigma around visiting psychiatrists and neurologists in developing countries might impede the growth of the nootropics industry.

The report gives a detailed analysis of the following key players in the global nootropics market, covering their competitive landscape, capacity, and latest developments like mergers, acquisitions, and investments, expansions of capacity, and plant turnarounds:

What was the global nootropics market size in 2020?

In 2020, the global nootropics market attained a value of nearly USD 2 billion.

The major drivers of the market include the increasing awareness, rising disposable incomes, increased demand for productivity, rise of self-directed buyers, growing population, and foreign investment.

What are the key industry trends of the global nootropics market?

The rising demand for improved decision-making in the sports industry and growing awareness with respect to mental health are the key industry trends propelling the market's growth.

What are the major regional markets of nootropics, according to the EMR report?

What are the types of nootropics in the market?

Prescription and OTC are the types of nootropics in the market.

The market is segmented on the basis of distribution channels into online and offline.

Based on applications, the industry is divided into mood and depression, longevity and anti-ageing, sleep and recovery, memory enhancement, attention and focus, and anxiety, among others.

The major players in the industry are Purelife Bioscience Co., Ltd., UCB S.A., HVMN Inc., and Gaia Herbs, Inc., among others.

The global nootropics market attained a value of nearly USD 2 billion in 2020, driven by the rising demand for improved decision-making in the sports industry. Aided by rising disposable incomes and growing awareness with respect to mental health, the market is expected to witness further growth in the forecast period of 2023-2028, growing at a CAGR of 14.6%.

EMR's meticulous research methodology delves deep into the market, covering the macro and micro aspects of the industry. Prescription and OTC are the types of nootropics in the market. The market is segmented on the basis of distribution channels into online and offline. Based on applications, the industry is divided into mood and depression, longevity and anti-ageing, sleep and recovery, memory enhancement, attention and focus, and anxiety, among others. The major regional markets for the nootropics are North America, Europe, the Asia Pacific, Latin America, the Middle East and Africa. The major players in the industry are Purelife Bioscience Co., Ltd., UCB S.A., HVMN Inc., and Gaia Herbs, Inc., among others.