The North America carbon black market reached a production volume of nearly 1.8 million metric tons. Being a leading market for carbon black globally, it is aiding the global market growth. The global industry is expected to witness a healthy growth in the forecast period of 2020-2025, growing at a CAGR of 4.3%. 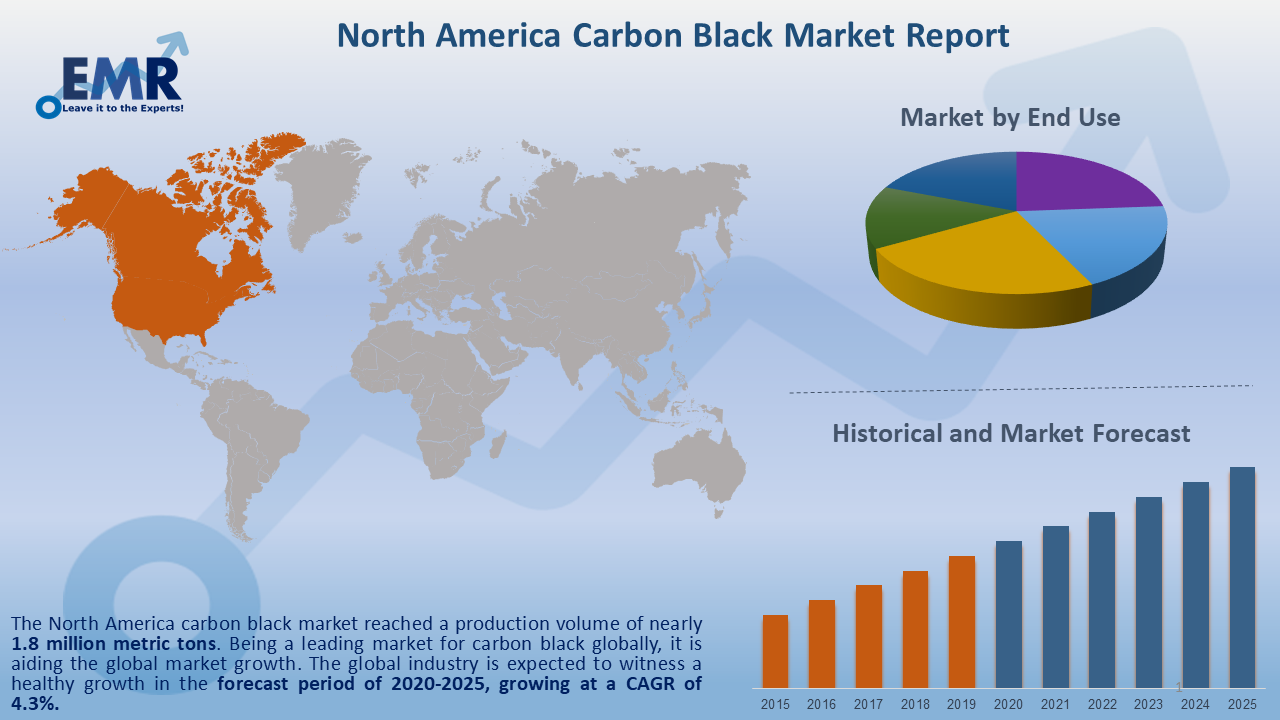 North America is the third largest producer of carbon black globally, behind the Asia Pacific and Europe. North America imports a significant proportion of low-cost carbon black from Russia and China. On the other hand, North America exports its high-quality or value-added products for use in segments like food or cosmetics to economies like China, India, Indonesia, Sri Lanka, and others. Within the region, the US is the leading industry for the product. The country is the second largest producer, globally, after China, accounting for nearly 15% of the global output of the substance. The industry within the US is primarily driven by the expansion of tyre industry not just within the country, but also neighbouring countries like Canada.

Globally, carbon black finds nearly 90% of its application within the rubber and other associated industries. Tyre remains the major application sector where it is used as a reinforcing filler. Thus, automotive is a significant end-use sector for the material. The industry is aided by the expanding automotive industry with the rising number of new vehicle registrations globally, leading to a rising demand for tyres. The global tyre industry is expected to grow at a CAGR of 4% in the forecast period of 2020-2025. The multiple R & D undertakings by the major companies will also provide further impetus to the carbon black industry growth. Thus, the technological innovations taking place in the industry will also aid its growth due to the subsequent expansion of the application sectors for the product.

Carbon black is a black, fine particle produced through the incomplete combustion of hydrocarbons. Its product types are categorised as specialty, lamp, channel, acetylene, furnace, gas, commodity, and thermal black, among others. Its grades are:

While it is most commonly used in tyres, it is finding expanding applications in inks, paints, plastics, tread belts, and extruded products, among others. Its diverse applications are determined by its properties like structure, particle size, physical form, surface chemistry, and porosity. Thus, its broad application sectors include:

The report also gives an in-depth insight into the regional markets in the North America region like the United States of America and Canada.

The North America carbon black market will be aided by the robust growth in the tyre industry in the region where the substance finds its major application. The tyre manufacturing market in the region is expected to be driven by the expanding market in the US. The tyre manufacturing industry in the US is worth USD 148.4 billion. The US original tyre sales saw a hike of 2.7% in 2018, as compared to 2017, with sales reaching 325.2 million units. The rising tyre market reflects the consumer demand for lightweight vehicles. The US is a leading automotive industry accounting for nearly a fifth of the global industry. The sales of electric vehicles are also witnessing a rise in the country. The US is a leading market for e-vehicle along with Europe and China and is projected to see sales exceed 320 thousand units in 2019. The growing e-vehicles industry expands the scope of the tyre industry with new tread requirements to counter the higher torque of the vehicles. This, in turn, will further aid the carbon black industry in North America.

Carbon black is also used in plastics, paints, coatings, sealants, and printing inks. Thus, the growing industries like infrastructure, construction, manufacturing, packaging, and printing industries will also aid the market in the region as emerging end-use industries. North America is the second largest print packaging industry and is expected to be worth USD 90.1 billion in 2020. Plastic production is also witnessing an increasing trend due to the region’s growing packaging industry. Speciality products are expected to see a rapid growth in North America in the forecast period.

The report gives a detailed insight into the following key players in the North America carbon black market, looking into their competitive landscape, capacity, and latest developments like expansions of capacity, mergers and acquisitions, and plant turnarounds:

The EMR report analyses the industry based on the Porter’s Five forces model as well as through a SWOT analysis. An overview of the other regional markets like Latin America, Asia Pacific, Europe, and Middle East and Africa has also been provided.

EMR’s meticulous research methodology delves deep into the market, covering the macro and micro aspects of the industry. Based on its types, the North America market can be segmented into specialty, lamp, channel, acetylene, furnace, gas, commodity, and thermal carbon black, among others. The various grades of carbon black available in the market are specialty grade, standard grade, N330, N550, N660, N220, and N990. On the basis of application, the transportation sector is a significant segment that is witnessing a healthy growth in the North America market. The major regional markets for carbon black in North America are the United States of America and Canada, with the US accounting for the largest share of the market. The key players in the above market include Birla Carbon, Cabot Corporation, Continental Carbon Company, Orion Engineered Carbons S.A., Tokai Carbon CB Ltd, Koppers Inc., and Cancarb Limited.

The major drivers of the market such as the expansion of the automotive industry, increased sales of electric vehicles, and growth of end-use industries like infrastructure, packaging and printing are expected to aid the market growth. EMR’s research methodology uses a combination of cutting-edge analytical tools and the expertise of their highly accomplished team, thus, providing their customers with market insights that are accurate, actionable, and help them remain ahead of their competition.

The Latin America carbon black market attained a production volume of almost 0.7 million metric tons in 2019. It is expected to grow further in the forecast period of 2020-2025 and will aid the growth...
Read More