North America Sealants and Adhesives Market to Grow at a CAGR of 3% between 2021 and 2026.

The North America sealants and adhesives market reached a value of nearly USD 14.42 billion in 2020. The regional industry is expected to witness a steady growth in the forecast period of 2021-2026, growing at a CAGR of 3%. 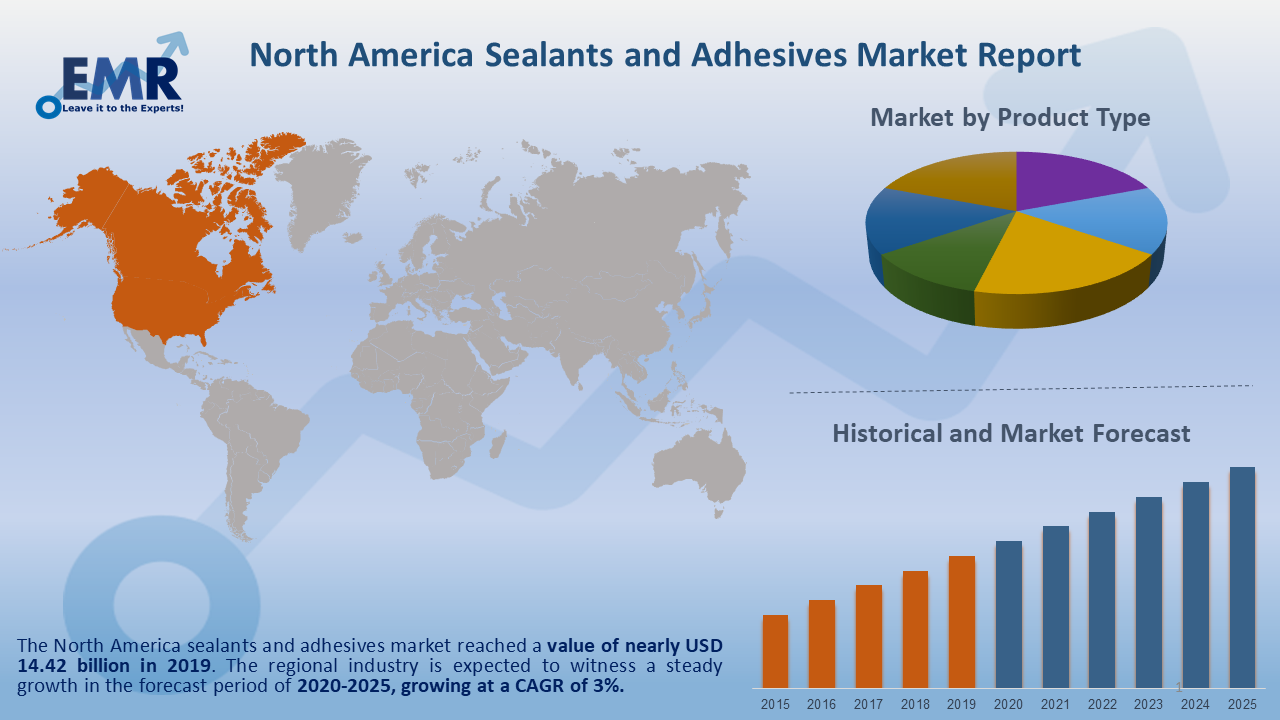 The US automotive industry is also adding to the growth of the North America sealants and adhesives market. In 2017, the US auto sales saw a robust hike of over 67% since the 2009 financial crisis. Vehicles sales are projected to exceed 16.8 million annually till 2026, with the US auto production expected to reach 12 million by 2026. The sealants and adhesives industry is not just aided by the overall growth of auto sales and production in the US, but also by the rising trend in North America towards producing lighter weight vehicles, which are fuel efficient and produce lower emissions.

Sealants prevent against structural damage by protecting the structure from breach of water, dust, dirt, insects, chemicals, and others, by sealing the gaps between the substrates and the joints. Adhesives, on the other hand, is used to join two surfaces. They are generally liquid in form and solidify upon application on the surfaces. The common adhesive types available in the market are:

Adhesives find their uses in sectors like paper, board and related products, building, construction, civil engineering, and craftsmen, woodworking and joinery, transportation, footwear and leather, consumer/DIY, and assembly operations, among others.

Sealants generally have a paste-like form, which allows them to flow into the structural gaps. The common sealants types are:

They find their applications in industries like construction, consumer and DIY, transportation, and assembly, among others. The EMR report analyses the regional markets in North America like the US and Canada.

The North America sealants and adhesives market is being driven by the growth of the application sectors like construction and transportation. The rising construction industry is also aiding the growth of other related application sectors like woodworking and joinery. The industry is also being driven by the rising packaging industry in the country. The robust online retail industry is a major driver for the growth of the packaging industry. The rising consumption of convenient packaged foods like ready-to-eat food and ready-to-drink beverages due to busier lifestyles of consumers will drive the sealants and adhesives industry in North America. Cosmetics is also a major application sector for the packaging industry. The US is a leading cosmetics market. The industry is expected to be propelled forward in the coming years due to the rising demand for premium products from the country’s growing high-income class.

Consumer and DIY is also a major application sector for sealants and adhesives that is witnessing a robust growth. The rising demand for diapers, feminine hygiene products, and adult incontinence products in the region is aiding the North America sealants and adhesives market growth. DIY is emerging as a significant trend in the industry as consumers are becoming more interested in DIY projects, influenced by the social media, which promotes them as a cost efficient alternative. The rising R & D undertakings by major manufacturers and the development of new technologies are expected to aid the North America sealants and adhesives market. Water-based and hot-melt types of adhesives are witnessing a growth in the region due to a shift away from solvent-based adhesives in the developed economies, globally.

The report offers a detailed analysis of the North America sealants and adhesives market, covering their competitive landscape, capacity, and latest developments like mergers, acquisitions, and investments, capacity expansions, and plant turnarounds:

The EMR report gives an overview of the other regional markets like Latin America, Europe, Middle East and Africa, and Asia Pacific. The comprehensive report gives an in-depth insight into the manufacturing process and the costs involved. It also assesses the North America sealants and adhesives market based on the Porter’s Five Forces model as well as providing a SWOT analysis. An analysis of the value chain has been given as well.

Many vendors have been attracted by the easy availability of raw materials, cheap labour, and low transportation costs to set up production facilities in the Asia Pacific region. Countries like China ...
Read More

The EMEA sealants and adhesives market attained a value of nearly USD 21.6 billion in 2020. The market is further expected to grow at a steady pace in the forecast period of 2021-2026, growing at a CA...
Read More

The Asia Pacific sealants and adhesives market attained a value of nearly USD 21.6 billion in 2020. It is expected to witness a steady growth in the forecast period 2021-2026 and is projected to reach...
Read More