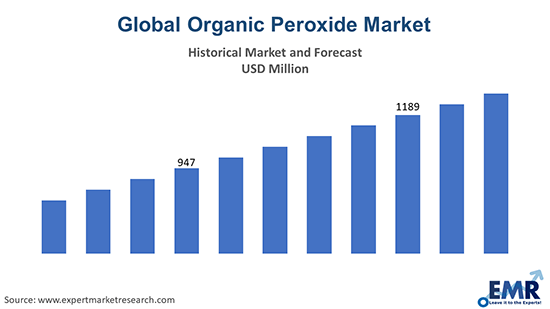 The Asia Pacific is likely to emerge as a viable growth ground for the organic peroxide industry due to the high demand for plastic products in the region. The emergence of China and India as one the major product manufacturing destinations is expected to propel the demand for organic peroxides over the projected timeframe. The thriving personal care industry, supported by the  growing disposable income and rising living standards, is contributing to the growth of the organic peroxide industry revenue. In addition, the increasing construction activities in the region have led to the increased demand for paints and coatings, which has resulted in the growth of the domestic market.

Organic peroxides are used to launch the polymerization process, which results in plastic polymers. They are used in the production of plastics such as polystyrene and polyvinyl chloride, as well as composite materials such as fibreglass. There are hundreds of different organic peroxides, each with specific properties and applications that allow them to manufacture a wide variety of polymers with varying properties. 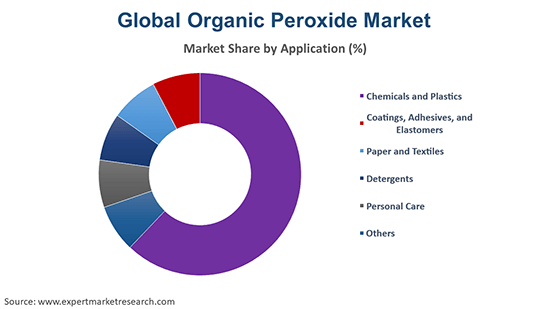 The market is divided based on application into: 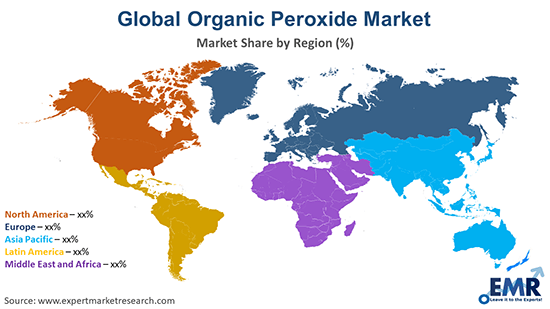 The increasing demand for coatings and adhesives is one of the major factors driving the growth of the organic peroxide industry. Coatings are one of the most popular uses of organic peroxides. Organic peroxides are well suited for the synthesis of coating resins and are used as coating curing agents as they provide benefits such as the generation of more polymer chains with a lower molecular weight. Radicals produced are more selective, resulting in less hydrogen abstraction (crosslinking) and less long chain branching, allowing for greater control over molecular weight and viscosity. This is aiding the growth of the overall organic peroxide industry. The market is also being supported by the growing construction industry as it significantly contributes to the demand for coatings and adhesives. Furthermore, hydrogen peroxide is commonly used to reduce acne as well as in skin lightening products. Thus, growing R&D activities and the increasing use of organic peroxide in skin treatment applications are expected to further boost the organic peroxide industry growth throughout the review period.

The report gives a detailed analysis of the following key players in the global organic peroxide market, covering their competitive landscape, capacity, and latest developments like mergers, acquisitions, and investments, expansions of capacity, and plant turnarounds:

What was the global organic peroxide market size in 2020?

In 2020, the global organic peroxide market attained a value of nearly USD 992 million.

What are the key industry trends of the global organic peroxide market?

The key industry trends driving market growth are hydrogen peroxide being commonly used to reduce acne as well as in skin lightening products, thus driving growing R&D activities and the increasing use of organic peroxide in skin treatment applications.

What are the major regional markets of organic peroxide, according to the EMR report?

The major regions in the industry are North America, Latin America, the Middle East and Africa, Europe, and the Asia Pacific, with Asia Pacific accounting for the fastest growing share in the market.

What is the dominant type of organic peroxide in the industry?

Ketone peroxide is the dominant type in the industry.

What are the leading application sectors of organic peroxide?

The leading application sectors include chemicals and plastics, coatings, adhesives, and elastomers, paper and textiles, detergents, and personal care, among others.

The major players in the industry are Arkema Group, United Initiators GmbH, Kawaguchi Chemical Co., Ltd., AkzoNobel N.V., and PERGAN GmbH, among others.

The global organic peroxide market attained a value of USD 992 million in 2020, driven by the increasing demand for coatings and adhesives, thriving personal care industry and the growing construction industry. Aided by hydrogen peroxide being commonly used to reduce acne as well as in skin lightening products, thus driving growing R&D activities and the increasing use of organic peroxide in skin treatment applications, the market is expected to witness a further growth in the forecast period of 2023-2028, growing at a CAGR of 3.5%. The market is projected to reach USD 1219 million by 2026.

EMR’s meticulous research methodology delves deep into the market, covering the macro and micro aspects of the industry. Based on its types, the organic peroxide industry can be segmented into diacyl peroxides, ketone peroxides, percarbonates, dialkyl peroxides, hydro-peroxides, peroxy ketals and peroxyesters, among others, with ketone peroxide accounting for the largest market share. The leading application sectors include chemicals and plastics, coatings, adhesives, and elastomers, paper and textiles, detergents, and personal care, among others. The major regional markets for organic peroxide are North America, Europe, the Asia Pacific, Latin America, and the Middle East and Africa, with Asia Pacific accounting for the largest share of the market. The key players in the above market include Arkema Group, United Initiators GmbH, Kawaguchi Chemical Co., Ltd., AkzoNobel N.V. and PERGAN GmbH, among others.