The global PE films industry is being driven by the significant growth in the Asia Pacific market, which is expected to grow at the rate of 2-3% in the forecast period of 2022-2027. The Asia Pacific market is driven by the high end-use demand from the food and beverage sector. The region has excellent potential for suppliers of PE films as the supply base is relatively fragmented in the region. The major suppliers in the region are extending their capacity to cater to the increasing demand. The PE films market is also being driven by the rising end-user demand from the fast-moving consumer goods (FMCG) sector, particularly from the packaged food industry. 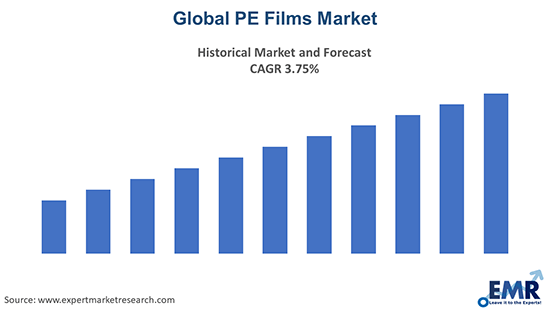 The global PE films market is going through several transformations in the form of advancements and innovations. Down gauged films, also known as thinner gauged films, are becoming popular in the market due to the cost-effectiveness of the product. There has also been a shift from environment harming products such as petroleum-based resin to more sustainable products such as nature-friendly products, like paper-based formats, starch, and biodegradable film options, and many more. The manufacturers are focusing on the customization of the product, based on film types and printing colours, among others, thus, aiding the growth of the PE films market further.

PE films, an acronym for polyethylene film, is a substrate, which is used in the production of grocery bags and food packaging. In addition, the PE film is usually thermoformed and manufactured into medical packaging, plastic bottles, and other packaging applications. 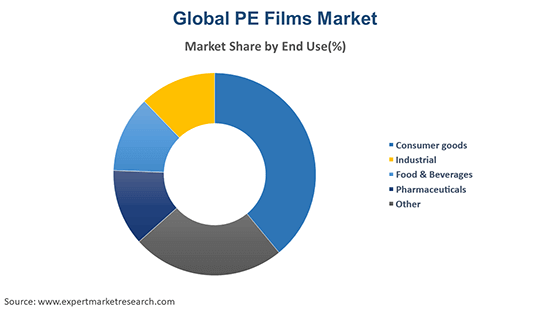 On the basis of end-use, the PE films industry is segmented into:

The food and beverage sector accounts for 58% of the demand for PE films from the total end-use segment. It is followed by consumer goods, pharmaceuticals, and industrial sectors. 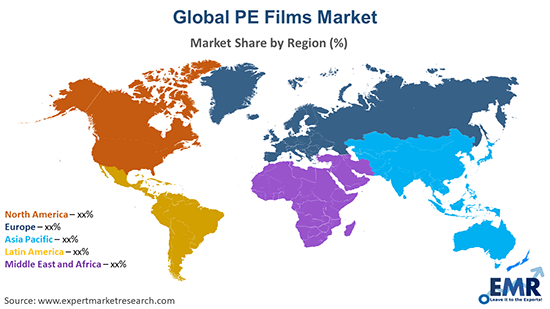 The global PE films market is being driven by the rise in the usage of stretch and shrink films. These films are extensively used in packaging and non-packaging applications owing to its physical properties, like stress, tear strength, and durability, among others, thus, aiding the market growth. The demand for food, beverages, and consumer goods products in the developing regions have increased, resulting from the growing urbanisation and inflating disposable income of the middle-class population, which is propelling the demand for PE films in these regions. The manufacturing machineries and production processes in the industry are stimulated with technological innovations, as a consequence of dynamic consumer preference, giving PE films an edge over other competing packaging counterparts, thus, providing an impetus to the market growth of PE films.

The market for PE films will be dominated by the Asia Pacific, due to the demand from the end-use industries such as packaged food and beverage packaging applications, invigorating the market growth for PE films. In the next five years, cost containment and sustainability will be the focal points in the product development in the industry. In this segment, the key focus of product development of major manufacturers will be the usage of biodegradable and sustainable films, among others. The PE films market is being driven by its technical properties like its light weight and ease of fabrication.

The packaging industry is focusing more on sustainability, as the demand increases from the developed regions such as North America and Europe. Rising pollution has led the countries in developing regions such as the Asia Pacific, particularly China and India, to look for a sustainable packaging solution. This has resulted in growing green practices due to anticipated new regulations associated with environmental sustainability to lower the carbon footprint.

The report gives a detailed analysis of the following key players in the global PE films market, covering their competitive landscape, capacity, and latest developments like mergers, acquisitions, and investments, expansions of capacity, and plant turnarounds:

What was the global PE films market size in 2020?

What are the key industry trends of the global PE films market?

The rise in the usage of stretch and shrink films and the increasing demand for food, beverages, and consumer goods products are augmenting the market growth.

What are the major regional markets of the global PE films, according to the EMR report?

The major regions in the industry are North America, Latin America, Europe, Middle East and Africa, and Asia Pacific with Asia Pacific accounting for the largest share in the market.

What is the dominant end-use sector in the industry?

Food  and beverages  is the dominant end-use sector in the industry.

The global PE films market attained a volume of almost 55.8 million metric tons in 2020, driven by the growing usage of stretch and shrink films. Aided by the growing technological advancements to produce sustainable products and rising demand from end-user industries, the market is expected to witness a further growth in the forecast period of 2021-2026, growing at a CAGR of 3.75%.

EMR’s meticulous research methodology delves deep into the market, covering the macro and micro aspects of the industry. Food and beverages is the dominant end-use sector in the industry. . The major regional markets for the global PE films are North America, Latin America, Europe, Middle East and Africa, and Asia Pacific, with Asia Pacific accounting for the largest share of the market. The key players in the above market include Amcor plc, Proampac Holdings Inc., Coveris Management GmbH, Berry Global Inc., and Klöckner Pentaplast Group, among others.