The global propylene glycol market demand reached a volume of around 2.72 million metric tons in 2019. The demand is projected to witness a further growth in the forecast period of 2020-2025, growing at a CAGR of 4.4%. The market demand is expected to reach an estimated volume of 3.5 million metric tons by 2025. The demand is driven by the growing personal and household care industries in almost all the regions like the Asia Pacific, North America, and Europe, among others. The demand growth in these markets is also supporting the growth of the propylene glycol market. 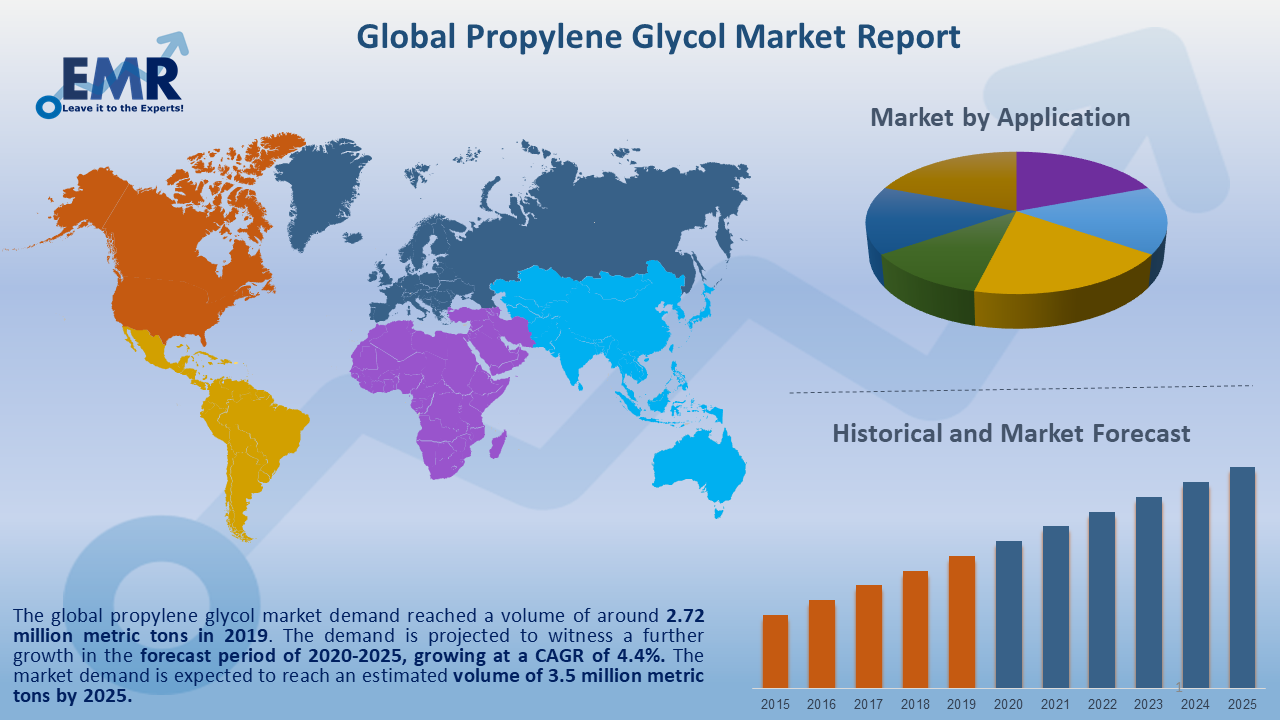 The Asia Pacific region is a significant consumer market, accounting for more than 40% of global consumption. China is the primary consumer market within the region. The Asia Pacific region is also a leading supply market and is the net exporter of the product. However, if the intra trade to regions like Thailand, Korea, China, and Singapore is excluded, then the Asia Pacific becomes a net importer of propylene glycol. The region is likely to increase its imports from the United States and the Middle East in the coming years due to planned capacity reduction in the forecast period. North America is a major exporter to the Asia Pacific due to the rising demand for unsaturated polyester resins in the region. The United States is the leading exporter in North America, with most of its exports of propylene glycol being bound towards the Republic of Korea, China, and Brazil.

Europe is a significant market for the product, with Germany being the major exporting country within the region. The demand is rising within the region due to the growing demand for functional fluids.  The region is also witnessing an increasing import demand for industrial grade propylene glycol (PGI). The demand for PGI increases sharply during winters, owing to the demand from de-icing and anti-freeze segments. Europe also exports to China and the Republic of Korea, where the demand is growing rapidly.

Propylene glycol, having the IUPAC name: propane-1,2-diol, refers to an organic compound having the chemical formula CH3CH(OH)CH2OH. It is a viscous, transparent liquid that is almost odourless but has a slightly sweet flavour to it. It contains two classes of alcohol, which are referred to as diols. It can be mixed with a wide range of solvents, including water, acetone, as well as chloroform. Glycols are generally non-irritating, have a very low volatility, and have a very low toxicity.

The major demand driving sectors in Europe during summers are the transportation and construction industry. The demand for the product is being driven by its usage in the food and cosmetics industry during winters. It is also extensively being used as a de-icing and anti-freezing agent in various industries. The Asia Pacific region is expected to witness an increase in demand growth. This is due to the thriving automobiles, construction, and pharmaceutical industries in the region. These industries are significantly aided by the rising disposable income of the consumers in the region.

Propylene glycol is used in household care products. The demand from liquid detergent, coatings, and paints sectors is propelling the market growth for the product further. The demand for the product is also affected by the season. During winters, the market witnesses significant demand growth for its use as an anti-freezing agent. This demand majorly comes from the airline industry.

The demand for glycerine-based or bio-based propylene glycol is rising rapidly among the pharmaceutical and consumer packaged goods companies, as it is less-toxic as well as has fewer side-effects. Thus, its demand is likely to grow much faster than regular propylene glycol.

The report gives a detailed analysis of the following key players in the global propylene glycol market, covering their competitive landscape, capacity, and latest developments like mergers, acquisitions, and investments, expansions of capacity, and plant turnarounds:

Poly-vents refer to the membrane composed of polymer materials that can be polypropylene with enhanced perforated glass fibre or ePTFE (Polytetrafluoroethylene). The materials used for poly-vents shou...

The rapid growth in the automotive industry has increased the market demand for polyetherimides. The commodity is used in the manufacture of automobile interior parts, handles, pistons, bezels, electr...

The Asia Pacific is a significant supply as well as consumer market. The region has a large consumer base for super absorbent polymer. The region is a major exporter of the product with China, the Rep...