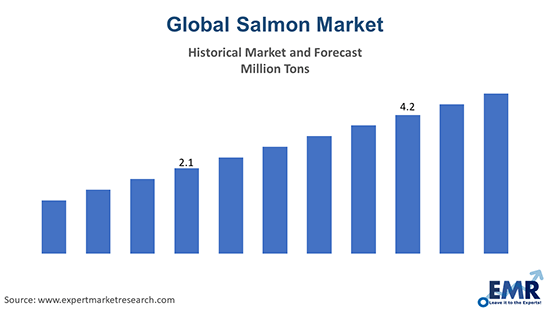 On the basis of production, farmed salmon are primarily raised in Norway, followed by Chile, Scotland, Canada, and the Faroe Islands. The United States is the largest wild salmon catch area, followed by Russia, Japan, and Canada. The European Union, the United States, Russia, China, Brazil, and Japan are significant consumption regions of the product. The European Union accounts for the largest share of the overall salmon market.

Salmon is a genus of ray-finned fish associated with the Salmonidae family found in the North Atlantic and Pacific Oceans. Salmon is commonly used in the world because it is high in calcium, iodine, vitamin D, vitamin B3, zinc, phosphorus, and omega-3 fatty acids. Because it is known to be one of the main sources of eicosapentaenoic acid (EPA) and docosahexaenoic acid (DHA), its intake provides several health benefits, like helping to minimise inflammation, reduce the risk of cancer, lower blood pressure, and improve the function of the cells lining the arteries. Salmon is an important part of the preparation of a wide variety of meals, including sushi, salads, tartar, burgers, and pasta. 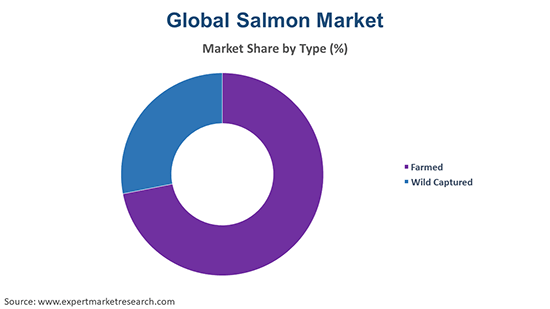 On the basis of type, the global salmon market can be divided into:

The species of salmon can be segmented into:

The end product type can be categorised as follows:

The distribution channels can be segmented into the following:

The farmed variant is majorly produced in the following regions:

The wild captured variant are majorly found in the following regions:

The major consuming regions of the product include the following: 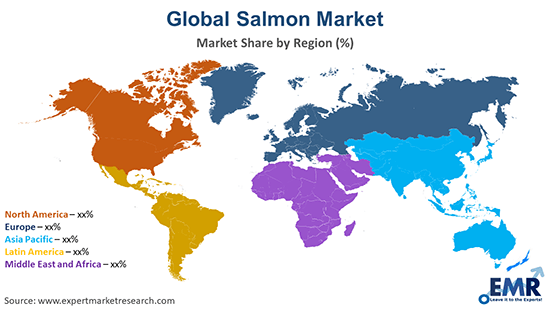 There has been a change in individual patterns of consumption due to multiple factors, such as sedentary lifestyle preferences, growing income rates, increasing prevalence of chronic conditions, and increasing knowledge of health and wellness. People concentrate on removing or reducing carbohydrate-charged food products from their everyday diet and increasing the intake of protein-rich food products. As a consequence, salmon are frequently used in the making of pasta, salads, burgers, tartar sauces, and other dishes typically eaten as part of their daily diet. In addition, a range of value-added items are launched by producers, like canned, frozen, smoked, and suckling salmon, along with salmon oil, lox, and spreads. The growing working population, in combination with busy schedules for individuals, is increasing the sales of ready-to-eat (RTE) and easy-to-cook food items. Consistent with this, compact packaging and easy availability of frozen and canned salmon are expected to fuel the demand growth of the salmon market in the coming years.

The report gives a detailed analysis of the following key players in the global salmon market, covering their competitive landscape, capacity, and latest developments like mergers, acquisitions, and investments, expansions of capacity, and plant turnarounds:

What was the global salmon market size in 2020?

In 2020, the global salmon market reached a volume of nearly 4 million tons.

By 2026, the market is estimated to attain a value of almost 5 million tons.

The major drivers of the salmon market such as rising disposable incomes, increasing population, increasing health consciousness, increasing prevalence of chronic conditions, and easy availability of canned and frozen variants of the product are expected to aid the market growth.

What are the key industry trends of the global salmon market?

The launch of value-added items by producers, like canned salmon, frozen, smoked, and suckling salmon, along with salmon oil, lox, and spreads, is a major trend driving the growth of the salmon market.

What are the major regions of salmon according to the market report?

Norway is the largest producer of the farmed variant of the product, with the United States being the most significant wild salmon catch area. The European Union, meanwhile, is the leading consumer of the product.

What are the leading types of the products in the industry?

The major types of salmon in the market are farmed and wild captured.

What are the significant species in the industry?

The leading species in the salmon market are Atlantic, Pink, Chum/Dog, Coho, and Sockeye, among others.

What is the leading distribution channel in the global salmon market?

The major distribution channels in the salmon market are foodservice and retail, among others.

The leading players in the market are Cermaq Group AS, Lerøy Seafood Group, Mowi ASA, and SalMar ASA, among others.

The global salmon market attained a volume of 4 million tons in 2020 driven by growing shift towards low-carb diet. Aided by the introduction of varied product types, the market is expected to witness a further growth in the forecast period of 2023-2028, growing at a CAGR of 4%. The salmon market is projected to reach 5 million tons by 2026.

EMR’s meticulous research methodology delves deep into the market, covering the macro and micro aspects of the industry. Based on type, the salmon market can be segmented into farmed and wild captured. On the basis of the species of salmon, the market can be divided into Atlantic, Pink, Chum/Dog, Coho, Sockeye, and others. Frozen, fresh, and canned, among others, are the major end product types of salmon. Based on distribution channels, the market can be divided into foodservice and retail, among others. While Norway is leading producer of farmed salmon, the United States is most significant wild salmon catch area. The European Union accounts for the largest consumption of the product. The key players in the above market include Cermaq Group AS, Lerøy Seafood Group, Mowi ASA, and SalMar ASA, among others.