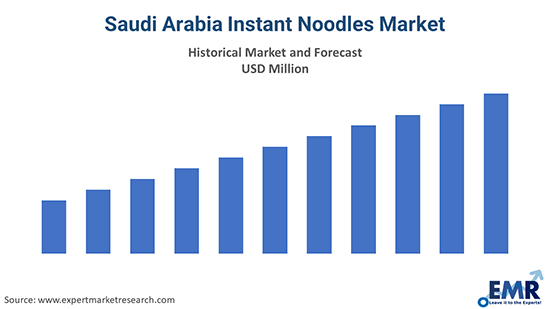 The industry is being aided by the increasingly fast-paced lifestyle of consumers and the rising consumption of processed foods globally. Globally, instant fried noodles are the most popular type of product, accounting for the majority of the market share. Since these noodles are flash fried, they help in protecting the flavour of the noodles, as well as enhance the shelf life and prevent the growth of bacteria in the product.

Indomie noodles, which are produced by a leading key player in the industry, Pinehill Arabia Food Ltd, accounts for the majority of the market share in the industry. Indomie’s market is expected to be around 95% in the Saudi Arabia instant noodles industry. It is guaranteed to be halal and is significantly preferred by the large Muslim population in the country as Saudi Arabia has one of the largest Muslim population globally. The overall instant noodle industry is, thus, also being supported by the rapidly rising demand for halal processed food in the country. 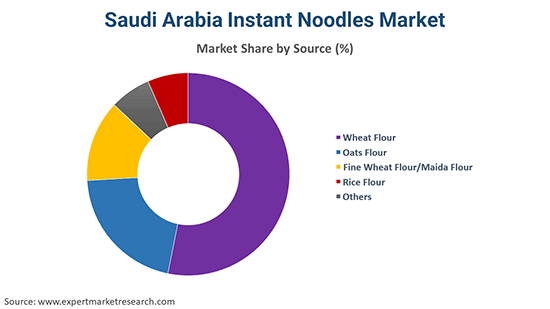 The sources of the product can be divided into:

The types of instant noodles can be segmented into:

The packaging type can be bifurcated into cups or packet.

The report also covers the regional markets like Makkah, Riyadh, Madinah, Qassim, and Eastern Province, among others. 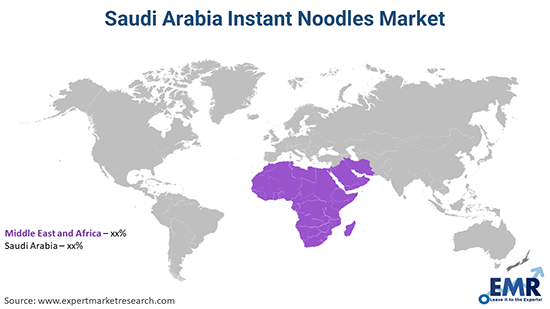 Due to the increasingly hectic lifestyle, the working population prefers affordable and quick meals, such as instant noodles, which require minimal cooking. Thus, the growing working population of Saudi Arabia is aiding the growth of the instant noodles market in Saudi Arabia. The rapid urbanisation and the increasing purchasing power of consumers have changed the eating habits of the population. This shift in their eating habits has created a significant opportunity for the industry to flourish in the country.

Instant noodles are available in multiple different flavours, along with numerous vegetarian and non-vegetarian variations. Moreover, the key players keep formulating new flavours, textures, and seasonings/tastemakers to expand their consumer base. Thus, the rising diversification of products is expected to support the industry growth in the coming years. The availability of numerous flavours caters to the tastes of all age groups, including kids and youngsters. The increasing organised food retail sector, with a rising number of departmental stores, hypermarkets, supermarkets, as well as convenience stores, is expected to support the growth of the industry. The industry is also expected to be aided by the rising consumption of convenient and ready-to-eat products in the region. The ease of preparation and the longer shelf life are further projected to propel the growth of the industry in the country.

The report gives a detailed analysis of the following key players in the Saudi Arabia instant noodles market, covering their competitive landscape, capacity, and latest developments like mergers, acquisitions, and investments, expansions of capacity, and plant turnarounds:

The comprehensive EMR report provides an in-depth assessment of the industry based on Porter’s Five Forces model, along with giving a SWOT analysis.

What was the Saudi Arabia instant noodles market size in 2020?

The instant noodles market in Saudi Arabia is likely to be driven by the global industry growth, which is expected to grow at a CAGR of 5% in the forecast period of 2023-2028.

The instant noodles market in Saudi Arabia is anticipated to be aided by the global industry, which is expected to reach a value of about USD 61.4 billion by 2026.

The major drivers of the industry, such as rising disposable incomes, increasing population, hectic lifestyles, growing product diversification, and a large population of younger consumers, are expected to aid the market growth.

What are the key industry trends of the Saudi Arabia instant noodles market?

Non-veg instant noodles dominate the industry in Saudi Arabia, especially chicken flavoured noodles, which were introduced in the country by the immigrant household workers from Indonesia. This is expected to be a key trend guiding the growth of the industry.

What are the major regional markets of instant noodles in Saudi Arabia, according to the market report?

Makkah, Riyadh, Madinah, Qassim, and Eastern Province, among others, are the major regional markets of instant noodles in Saudi Arabia.

What is the dominant form of instant noodles in the industry?

Fried instant noodles is the dominant form of the product in the market.

What is the leading type of instant noodles in the industry?

Non-veg instant noodles are the leading type of the product in the industry.

What are the major sources of the product?

The major sources of the product are wheat flour, oats flour, fine wheat flour/maida flour, and rice flour, among others.

The leading players in the market are Pinehill Arabia Food Ltd., Nestle SA, Riyadh Food Pvt. Ltd., and Chaudhary Group, among others.

The Saudi Arabia instant noodles market is aided by the growth of the global market, which attained a value of USD 44.5 billion in 2020. Aided by the product diversification, and a large population of younger consumers, the global market is expected to witness a further growth in the forecast period of 2023-2028, growing at a CAGR of 5% and is projected to reach USD 61.4 billion by 2027.

EMR’s meticulous research methodology delves deep into the industry, covering the macro and micro aspects of the industry. Based on type, the Saudi Arabia market can be segmented into veg, non-veg, and plain noodles, with the non-veg noodles leading the regional market. On the basis of form, the regional industry can be bifurcated into fried and non-fried noodles, with the fried noodles segment leading the market. The major sources of the product are wheat flour, oats flour, fine wheat flour/maida flour, and rice flour, among others. The major regional markets for instant noodles in Saudi Arabia are Makkah, Riyadh, Madinah, Qassim, and Eastern Province, among others. The key players in the above market include Pinehill Arabia Food Ltd., Nestle SA, Riyadh Food Pvt. Ltd., and CG Corp. (Wai Wai), among others.