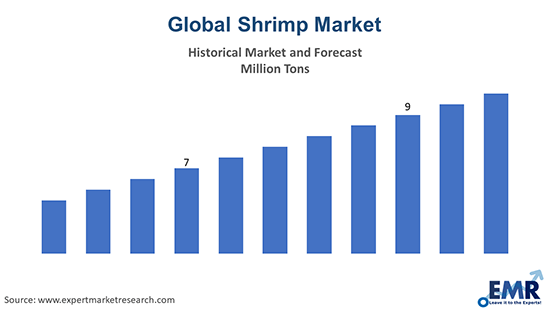 The Asia Pacific to Lead the Global Market for Shrimp

The Asia Pacific has been leading the shrimp market for a significant period of time. In China, shrimp production usually begins at the end of calendar year. During this era, farmers make simple repairs to culture ponds by removing accumulated sediment, taking advantage of the sun, and cold in winter to scrub the pond completely which increases the shrimp population within the pond. Adoption of Pacific white shrimp because the prominent species by India’s growing aquaculture industry, especially within the contract farming sector, is one among the most factors, which helps India to expand more into the United States shrimp market. Other major regions include Indonesia, Vietnam, Thailand, and Ecuador, among others. On the opposite hand, the main shrimp consuming regions are the United States, China, Europe, Japan, among others.

Shrimp is an invertebrate marine animal, belonging to the foremost important class of crustaceans called Malacostraca. Its structure is identified by a laterally compressed and enlarged body with lengthy legs and antennae. Widely available in freshwater lakes and streams, and deep and shallow waters, it is considered to be one of the foremost commonly consumed seafood species across the planet. 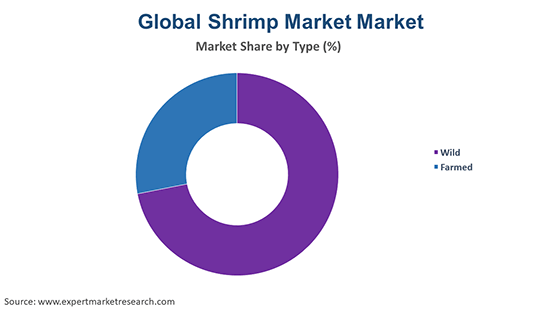 Based on type, the market has been classified into:

Based on the species, the market has been divided into:

On the basis of the shrimp size, the market has been segregated into:

Based on category, the market has been divided into:

The market has been classified based on the distribution channel into: 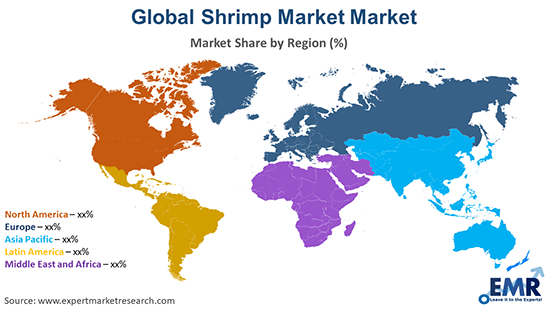 The global market is primarily driven by the enormous popularity of frozen shrimp products among end users. This is often supported by the inflating income levels of the masses, the shifting lifestyle patterns, and significant improvements within the online and offline organized retail platforms. Apart from these, processed and frozen shrimp products are seldom characterized by affordable prices, easy availability, lower cooking time and elongated shelf-life. These factors have led them to realize widespread prominence across the world and are increasingly preferred by working professionals with busy schedules and hectic lifestyles. The demand for shrimp is increasing among end users and buyers because it is rich in nutritional value and low-fat protein. It contains zero carbs and is extremely low in calories. These factors make consumers incorporate shrimp in their food diet. Thus, there was an increase in shrimp production to cater to the increased demand which led to a growth in production thus raising the demand.

The report gives a detailed analysis of the following key players in the global shrimp market, covering their competitive landscape, capacity, and latest developments like mergers, acquisitions, and investments, expansions of capacity, and plant turnarounds:

What was the global shrimp market size in 2020?

The global shrimp market reached a volume of 8.12 million tons in 2020.

The major drivers of the industry include rising population, rising standard of living of individuals, growing disposable incomes, demand for frozen shrimp products, and various health benefits from shrimp.

What are the key industry trends of the global shrimp market?

Rising health consciousness of people industries are the key industry trends guiding the growth of the shrimp industry.

What are the major regional markets of shrimp market, according to the EMR report?

What are the dominant types in the industry?

Wild shrimp and farmed shrimp are the dominant types in the industry.

What are the major species in the industry?

The major species in the market are Penaeus Vannamei, Penaeus Monodon, and Macrobrachium Rosenbergii, among others.

What are the major sizes of the product in the industry?

The global shrimp market reached a volume of 8.12 million tons in 2020, driven by the increasing demand for frozen shrimp across the globe. Aided by the rise in health consciousness among people regarding shrimp health benefits, the industry is likely to grow at a CAGR of 4.5% to attain a volume of 10.7 million tons by 2026.