The global spiced/flavoured rum market reached a value of about USD 6.2 billion in 2020. The industry is further expected to grow at a CAGR of 4% in the forecast period of 2022-2027 to reach a value of around USD 8 billion by 2026. 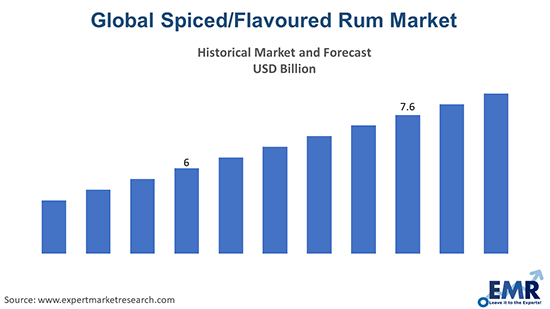 The spiced/flavoured rum industry in the Asia Pacific held a significant share in the global market in 2020 and is most likely to witness a healthy rise in the forecast period as well. The growth in the region is being triggered by the rising consumer demand from countries like China, India, Japan, South Korea, Philippines, and Australia. South Korea is particularly leading the consumer demand within the region owing to the booming demand for gin and rum. Apart from the Asia Pacific, Europe is also anticipated to witness a significant growth in the coming years. The demand for spiced rum is on a rise in Germany due to its rising popularity among the consumers.

The industry is significantly being supported by the cocktail revolution, which has been extremely helpful in gaining attention from drinkers who are interested in both flavours, that is traditional as well as exotic. This has led to a robust demand for spiced spirits among the consumers, leading to the rising sales of spiced rums in bars, restaurants, and pubs. 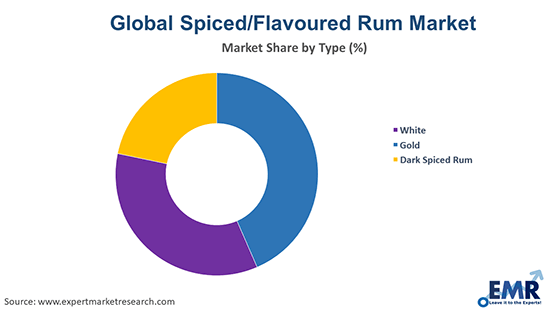 Rum is an alcoholic drink made from sugar cane molasses or directly from sugar cane juice by fermenting and distilling. The spicy-flavoured rum contains numerous aromas as well as spices, which are added to a special mixture of spirits. Initially developed to meet medical needs, the spicy rum is becoming more popular with its distinctive flavour and persistent market demand for new exciting liquefied aromas. The flavour of the spices ranges from ginger, garlic, cinnamon, clove, and others, to which common aromatic agents for spicy rums are added like fruit extracts, including citrus, mint, an apple, coconut, and mango. Spicy/flavoured rum makers, like Diageo and Captain Morgan are the bestsellers of spicy rum, with distinct vanilla and caramel taste.

Based on product, the industry can be divided into:

On the basis of type, the product can be categorised as follows:

The distribution channels can be bifurcated into on-trade and off-trade.

The regional markets for spiced/flavoured rum can be divided into North America, Europe, the Asia Pacific, Latin America, and the Middle East and Africa. 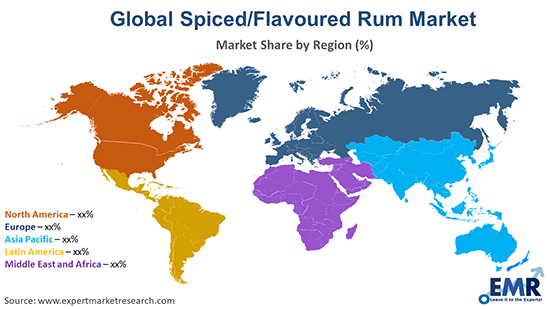 Introduction of Innovative Flavours to Propel the Market Growth

The global spiced/flavoured rum industry is being driven by various factors including the rising economies, changing lifestyles of the consumers, as well as their increasing disposable incomes. The market growth is supported by the rising preferences of the consumers for rum and gin. The demand for spiced/ flavoured rum is thriving owing to the rising experiments and innovations with the product at various pubs, bars, and restaurants. The increased demand for rums in cocktails is also aiding the market growth as  flavoured rum provides a special taste to drinks, plus spicy rum is normally consumed with cola due to its ease of preparation. The introduction of new varieties of spiced rum is expected to bolster the growth of the market in the coming years.

The report gives a detailed analysis of the following key players in the global spiced/flavoured rum industry, covering their competitive landscape, capacity, and latest developments like mergers, acquisitions, and investments, expansions of capacity, and plant turnarounds:

What was the global spiced/flavoured rum market size in 2020?

In 2020, the global spiced/flavoured rum market attained a value of nearly USD 6.2 billion.

The market is estimated to witness a healthy growth in the forecast period of 2022-2027 to reach about USD 8 billion by 2026.

The major drivers of the industry, such as rising disposable incomes, increasing population, increasing consumer demand, healthy demand for spiced spirits, and enhanced standards of living, are expected to aid the market growth.

What are the key industry trends of the global spiced/flavoured rum market?

The key trends guiding the growth of the market include the growing experiments with the product at various pubs, bars, and restaurants and the increasing introduction of new varieties of spiced rum.

What are the major regional markets of spiced/flavoured rum, according to the EMR report?

What are the leading products of spiced/flavoured rum in the market?

The leading products of spiced/flavoured rum in the market are vanilla, fruit, and mix, among others.

What are the major types of spiced/flavoured rum in the industry?

The major types of spiced/flavoured rum in the industry are white, gold, and dark spiced rum.

What are the significant distribution channels in the market?

The significant distribution channels in the market are on-trade and off-trade.

The global spiced/flavoured rum market attained a value of USD 6.2 billion in 2020, driven by rising demand for spiced rum among the consumers. Aided by the introduction of new products, the market is expected to witness a further growth in the forecast period of 2022-2027, growing at a CAGR of 4%. The market is projected to reach USD 8 billion by 2026.

EMR’s meticulous research methodology delves deep into the market, covering the macro and micro aspects of the industry. By product, the market is segmented into vanilla, fruit, and mix, among others. Based on type, the product is divided into white, gold, and dark spiced rum. On the basis of distribution channels, the market is categorised into on-trade and off-trade.  The major regional markets for spiced/flavoured rum market are North America, Europe, the Asia Pacific, Latin America, and the Middle East and Africa. The key players in the above market include Diageo plc., Bacardi Limited, Pernod Ricard SA., Maine Craft Distilling, LLC., and Altitude Spirits, Inc., among others.

The global food grade alcohol market attained a value of about USD 7.35 billion in 2020, driven by the extensive use of the product in the pharmaceutical and nutraceutical industry. Aided by the new p...
Read More

The global dark spirits market attained a value of about USD 81.7 billion in 2020, driven by the rising e-commerce sites and delivery services, facilitating the availability of liquor. Aided by the gr...
Read More

The global snus market is driven by the increasing popularity of smokeless tobacco products, increased use of snus as a substitute for cigarettes around the world, increased introduction of new innova...
Read More

The India whiskey market attained a volume of 135. billion litres in 2020, driven by the changing lifestyle of people. Aided by the rapid urbanisation and the growing preference for premium alcoholic ...
Read More

The global rhum agricole market was driven by the overall rise in modern trade, business-to-business  trade, and e-commerce in the historical period. Aided by increasing demand among consumers and ri...
Read More