The global super absorbent polymer (SAP) market demand reached a volume of nearly 2.8 million metric tons in 2019. The market demand is expected to grow at a CAGR of 5.3% in the forecast period of 2020-2025 to reach a volume of 3.8 million metric tons by 2025. The major supply markets include the Asia Pacific, North America, and Latin America. The Asia Pacific accounts for 64% of the market share. 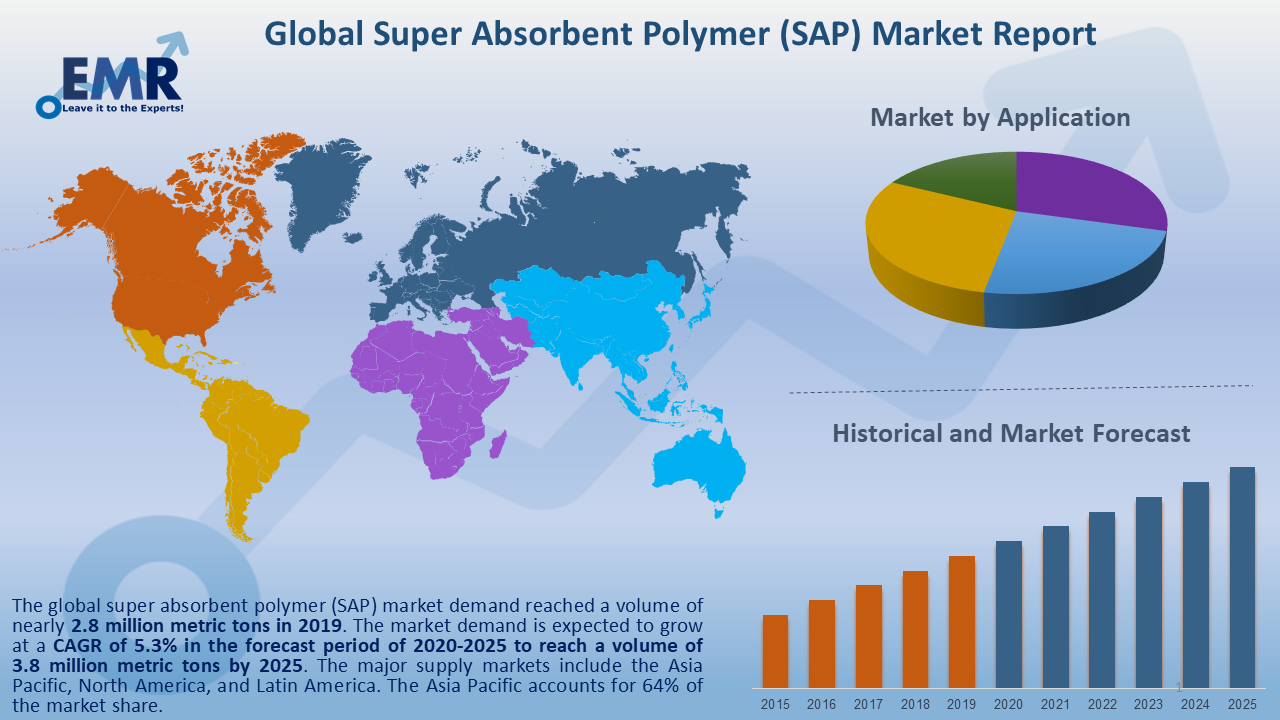 The Asia Pacific is a significant supply as well as consumer market. The region has a large consumer base for super absorbent polymer. The region is a major exporter of the product with China, the Republic of Korea, and Japan being the significant producers in the Asia Pacific. The demand for the product is majorly driven by the increasing demand for baby diapers, especially in China and India. China is the largest consumer market within the region, accounting for a significant proportion of the total sales. The demand for adult incontinence is majorly concentrated in Japan due to lower birth rates and rising older population.

North America is another significant market for super absorbent polymer as the United States is the largest producer and consumer of the product in the region. The United States and China together account for nearly 45% of the global sales of the product. The United States alone accounts for almost 90% of consumption in North America due to the increased penetration of diapers in the market, followed by Canada. In Latin America, the demand for sanitary pads and other adult incontinence is likely to witness a healthy growth demand due to the growing population of working women and the ageing population. The significant regional markets in Latin America include Mexico, Argentina, and Brazil, owing to the growing demand for baby diapers.

The producers of super absorbent polymer are planning to expand their plants in order to meet the growing demand in the market. The companies are more likely to expand their supply in the incontinence segment.

Superabsorbent Polymers (SAP) refers to a substance that can withstand up to 300 times its weight in liquids. Most of them are produced using sodium polyacrylate and are available as fibres or in granular form. The granular substance is a polymer comprising of millions of equivalent units of sodium acrylate shaped into a fence like the structure of chains. Then, these are connected to turn the content into a three-dimensional network. Lengthy polymer chains are finally coiled in their dry state. When the water is consumed, it uncoils, and the network grows. The fluid is then deposited in the spaces of the molecular network, and the substance forms a gel that seals the liquid inside.

Super absorbent polymer finds its applications in the production of the following products:

The growing awareness about personal hygiene in emerging nations like India, China, and Brazil is driving the demand growth for personal hygiene products in the region. Other driving factors include the increased application of the product in water treatment, medical industry, and agriculture. These markets are expected to grow more in the coming years, driving the market for super absorbent polymer as well. The rising demand for acrylic acid is also pushing the market growth further. The increasing disposable income of consumers in these regions is another factor providing an impetus to the market growth of superabsorbent polymer, especially in China and India.

The report gives a detailed analysis of the following key players in the global super absorbent polymer (SAP) market, covering their competitive landscape, capacity, and latest developments like mergers, acquisitions, and investments, expansions of capacity, and plant turnarounds:

EMR’s meticulous research methodology delves deep into the market, covering the macro and micro aspects of the industry. Based on application, the global super absorbent polymer (SAP) market can be segmented into disposable baby diapers, adult incontinence products and feminine hygiene products, among others, with disposable baby diapers accounting for three fourth of the total demand for the product. North America, Latin America, Europe, the Middle East and Africa, Europe, and the Asia Pacific are the major regions in the market, with the Asia Pacific leading the overall global super absorbent polymer (SAP) market with a 64% share. The key players in the above industry are Nippon Shokubai Co., Ltd., BASF SE, Sumitomo Seika Chemicals Co., Ltd, Evonik Industries AG, SDP Global Co., Ltd, LG Chem Ltd, Yixing Danson Technology, and Formosa Plastics Corporation, among others.

The major drivers of the industry such as rising disposable incomes, increasing population, rising urbanisation, rising demand for disposable baby diapers, growing demand from India and China, and rising demand from the medical, agricultural, and water treatment industries are driving the growth of the market globally. EMR’s research methodology uses a combination of cutting-edge analytical tools and the expertise of their highly accomplished team, thus, providing their customers with industry insights that are accurate, actionable, and help them remain ahead of their competition.

Poly-vents refer to the membrane composed of polymer materials that can be polypropylene with enhanced perforated glass fibre or ePTFE (Polytetrafluoroethylene). The materials used for poly-vents shou...

The rapid growth in the automotive industry has increased the market demand for polyetherimides. The commodity is used in the manufacture of automobile interior parts, handles, pistons, bezels, electr...

The Asia Pacific is the major supply market, accounting for around 60% of the market share. China’s recent capacity addition is likely to reduce Asia’s polycarbonate import reliance in the coming ...